The 2018 Bordeaux En Primeur campaign reached new heights this week with the surprise release of one of Saint-Emilion’s top estates - Chateau Angelus. As well as offering a pleasing reduction in price versus their last two vintages, this welcome surprise set the tone for potentially one of the most exciting En Primeur campaigns ever.

Last week our first releases of the campaign, Chateau Tour Saint Christophe and Enclos Tourmaline, saw equally keen interest with Enclos Tourmaline selling out almost immediately and Chateau Tour Saint Christophe soon following suit - remaining one of the the top value buys in Saint-Emilion this year. These two early releases are signs of wide global interest in Bordeaux 2018 across all price points.

In a region as well-publicised as Bordeaux, it might be easy to think that "under-the-radar" buys are a thing of the past. But the Chateau Tour Saint Christophe 2018 release is proof that a relatively unknown producer can become very popular, very quickly when the quality is there. Chateau Belle-Brise in Pomerol  is another case in point. Produced in tiny quantities (750 cases a year) from 70 year old vines a brisk walk away from Le Pin, Belle-Brise is a beautifully composed, elegant Pomerol that due to its tiny quantities and its under-exposure to critics remains a relatively little-known gem.

The vast majority of production never reach private clients, with most going to some of the finest 3 Michelin starred restaurants across France. In fact 80% of the 3 star Michelin restaurants in France (and 25 other countries) list the wine, including Lucas Carton, George Blanc, Alain Ducasse Le Louis XV Monaco, Guy Savoy, Pierre Gagnaire, Eden Roc Cap d'Antibes and many more. Belle-Brise is so rare that vintages often go unscored by the critics, who are simply unable to get hold of a bottle. Those who do taste it, however, will be forever trying to find some more. This is a wine to snap up now if you can, and then enjoy for years to come.

As Jancis Robinson puts it “Chateau Belle-Brise release just a handful of bottles each vintage. At just 2 hectares in size and with similar production levels to Chateau Le Pin, it is so elusive it is basically unknown to the general public. Within the upper echelons of the world’s greatest restaurants though, the wines have an intense, nearly obsessive following.”​

Tucked away in Pomerol’s south west corner, Chateau Belle-Brise is a true insider’s Bordeaux and we are very excited that their wines are exclusive to FINE+RARE in the UK. With just a two hectare walled garden vineyard, the production is minuscule, making it one of the rarest wines in the marketplace and arguably more exclusive than either Petrus or Le Pin. ​

​Henri-Bruno de Coincy acquired the property in 1991. He is the 20th generation of the Armagnac-making Coincy family, who have been producing Armagnac for an incredible 700+ years. Wine has been made at Belle-Brise since the eighteenth century, but before 1991 it was only made available to family and friends of the winemaker. ​

Stylistically, this artisan Pomerol is silky and opulent, but with the finesse and almost weightless power more akin to Grand Cru Burgundy. The vineyard contains a split of around 80% Merlot and 20% Cabernet Franc, and old vines of up to 70 years old. The soil has gravel on the surface and beneath, a layer of clay, chalk and crasse de fer (iron rich bands of sand that play an important role in the flavour characteristics of many top Pomerol wines). The wines are made using biodynamic and organic principles, and employ horses to work the vines.​

Despite its cult following, you may be surprised by the lack of reviews from critics. Owner and winemaker Henri-Bruno de Coincy refuses to allow the critics to review his wines and has actually asked the likes of Wine Advocate and Vinous to remove old write-ups. However if you dig deep enough, there are a few intriguing mentions that demonstrate the buzz around this little-known producer. ​

The style is simply sublime. The unique terroir and vinification methods result in wines that deliver a sense of finesse and controlled power more common in the great Grand Crus of Burgundy, more specifically Musigny.​ Henri-Bruno has described his 2018 as the best wine he has ever produced at the Estate but the season was to begin with was a tricky one. One day in mid July he had to gather a team of 15 people to assess every vine, removing individual berries that were affected by the mildew. Beyond July the weather was perfect and this additional work in the vineyard resulted in a beautifully pure, concentrated wine in 2018.

Pomerol is one of the great red wine appellations of Bordeaux. Historically it stands apart from other Bordeaux appellations as Pomerol has no formalised wine classification system - unlike Medoc, Graves, Sauternes and Saint-Emilion. While the appellation was barely acknowledged until about 50 years ago, wines like Petrus, Le Pin and Lafleur now command higher prices than many cru classe properties throughout the Medoc.​

Don’t miss the upcoming release of their 2018, likely to be early next week... 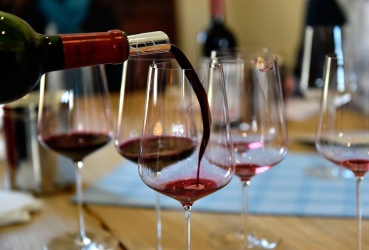