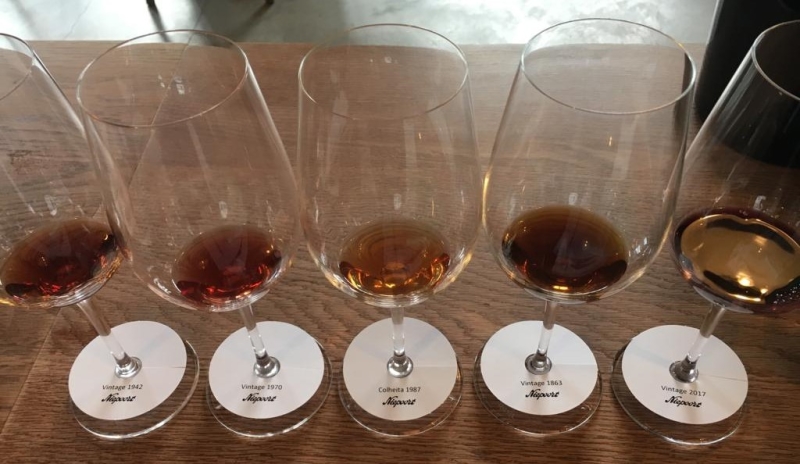 A bold claim from the larger-than-life Dirk Niepoort - made none the less impactful by the laughing concession that he had said the same of his 2015, 2011 and 2005 vintages.

2005 and 2011 vintages were universally declared, whilst the 2015 was a more limited vintage for declarations from the likes of Niepoort and Ramos Pintos. The 2017, at time of writing, has been officially declared by the Symington Family and Quinta do Noval. 2016 was generally declared, but Niepoort stepped out of line, and for him 2017 is undoubtedly a superior vintage.

Dirk Niepoort has no qualms about ruing the overripe jammy styles of the “English houses”, and this is what 2016 represented for him. For Dirk it was obvious from the beginning that 2017 was going to be a great year. It produced low yields, after early flowering and a hot and dry growing season, but the magic came during harvest, which was warm but not too hot and with cool nights.

Dirk claims to pick consistently earlier than his ‘colleagues’ and he would ensure that any jammy grapes we separated out at selection; in 2017 there weren’t many jammy grapes to start with. His style is one that seeks that ‘special balance’: where all of the individual elements that can make young vintage port so ‘big’ - big fruit, big tannins, big acid, big sugar, big alcohol - come together in such a way that they are both altogether less ‘big’ and at the same time greater than the individual parts. And it works.

Before tasting, Dirk warns us that this will probably be the most tannic wine we have ever tasted. If it is, it isn’t obvious. The fruit is not overly ripe or confected – there is nothing tutti frutti here, no one particular fruit stands out, but an overall impression of earthy black and red cherries, blackcurrant and blackberry, and just a hint of ripe blueberries. There is a sweet attack on the front palate, but the amazing concentration leads through to surprisingly dry finish. The tannins are powerful and chewy but in no way harsh. It is dramatic and generous but fresh and sophisticated.

Dirk doesn’t mind quoting wine industry personalities he has shown the wines to that have raved about it. One compared it to the legendary 1945 vintage. Dirk thinks 1945 must have been a hotter vintage, but he’ll take the comparison as the Niepoort 1945 in particular is an idolised wine.

The 1942 was a medium garnet colour, raisin and sous bois on the nose, still fresh cherry on the palate, with chocolate and tobacco, sweet dates and figs, cinnamon spice, fresh acid, silky tannins and in many ways more like a mature red wine than a port. For Dirk, the 1942 is perfect at this stage and possibly even better in 20 years’ time. Niepoort’s was probably the stand out of the vintage.

The 1970 was still bright ruby – almost shockingly so. Dirk puts this down to oxidation in the winemaking process, which then protects it from oxygen later on. In fact he was accused at one point of having refreshed his 1979, so youthful was the appearance. The 1970 had a super fresh, Grenache like aroma profile of blood orange, cranberry and pomegranate, along with dried figs and cloves. Tart, puckering but super fine tannins and a long finish.

The 1987 Colheita also still had some ruby in it. The nose was amazing pure toffee chocolate. The palate had herbal and liquorice notes, so delicious and enticing.

The 1863 Garrafeira was fully brown with a greenish tinge. Coffee, dates, black liquorice, toffee, quite savoury with a long coffee finish. Amazing.

All in all, the balance and sophistication of these ports truly stand out as Niepoort’s signature style, even if they are in other ways very varied and individual. Whilst not many critics will yet have tasted across the range of 2017s about to be released, there is no doubt that the vintage has huge promise on the whole, and this is evident here with the 2017 Vintage Port from the idiosyncratic Dirk Niepoort, which we are looking forward to offering in the next few days. Watch this space.