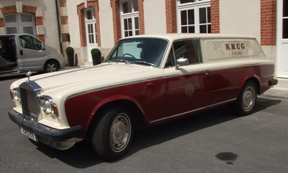 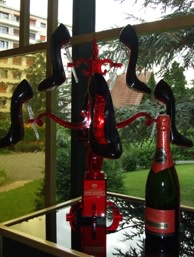 Piper Heidsieck proved a very different affair to the old fashioned glamour of Charles the previous evening, as we pulled up outside a modern office building with the wine making facilities behind a huge car park. How many people does it take to run a champagne house? Our lecture today was Bottling to Packaging and run by their newest member of the blending team, which was a challenge for her having only joined a couple of weeks previously.

It was down to another Vins Clairs tasting to train our palates for the blind exam and then lunch accompanied by:

A visit to Krug followed where we were grateful to retreat to the cellars from the heat of the day. These are not open to the public – nor is the house – and they had run a private opera concert there the night before! We wandered, we admired, we headed upstairs to see the recently discovered original red “recipe book” then onto the tasting:

NV Krug Grande Cuvée Classicly rich if not on a par with vintage, full body and those almond and sherry notes that are so Krug start to dominate. Fresh ripe citrus underneath, long, great fresh end down the sides.

1998 Krug Tropical fruit nose with just the slightest hint of sherry. Almonds and buttery notes come through on palate and then the full creamy sherry notes and tarte tatin take over.

2000 Krug Big nose with loads of autolysis flavours, pastry, cream but also a young freshness to it. Layered, complex, rich and seems to last forever, hints of pineapple upside down pudding. Stunning.

In the evening, to the soundtrack of rolling thunder, we headed to the newly refurbished Hotel du Marc of Veuve Clicquot Ponsardin. This extravagant old mansion has been modernized with a lot of evidence of the trademark orange of the brand. The tour began in a fabulous bar room with everything from table football to a grand piano. Unfortunately, the floor to ceiling bottles were sample only, but we did get to try:

1990 Veuve Clicquot Cave Privée Very unusual nose, seems to toy with a light floral character and some sherry notes. Clear marzipan anyway and leads to clean, fresh apple, a touch of yeast and round smooth finish.

1990 Veuve Clicquot Cave Privée from Magnum Fresher, less sherry which makes since as there has been less oxygen to wine contact from the format. Some bruised apple and then palate is citrus clean, fresh and develops quickly in glass.

1990 Veuve Clicquot Cave Privée from Jeroboam Almost corned beef whiff on opening but then dissipates to tropical fruit and some petrol hints. The profile constantly changes and sometime sit is acidic and citrus, then it is round tropical, then minerality and linear structure, what a wine!

Following the tasting, we were led into the spectacular dining room (the most impressive alongside Roederer) to be served the best food and wine pairings of the week (again along with Roederer) which included:

And for coffee and chocolates? We were ushered into a lift and down into the cellars of the house (as opposed to storage cellars) which were a veritable Aladdin’s cave and it was here that the wonderful Cyril – the evening’s host and Veuve winemaker - proceeded to open 1985 and 1975 Cave Privée. I did not take notes but suffice to say, these were amazing. 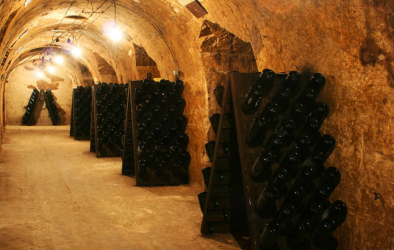