It was a great pleasure to spend some time over the last few weeks with Omri Ram, the winemaker and viticulturalist at the helm of Chateau Lafleur - first tasting the new 2018 releases with him at Chateau Lafleur and then again on his recent visit to London.

Following the tasting it was no surprise to see the spectacular scores Chateau Lafleur universally received for its 2018 vintage. It is undoubtedly one of the wines of the vintage, maintaining its reputation as some of the most hallowed ground in Pomerol, if not the world. Spending time with Omri, we wanted to understand why he believes Chateau Lafleur is so special. What is it that makes these wines so profound and some of the most collectable bottles in the world?

Whilst he states there is no one singular answer  - when Omri explains the history of the site, particularly in the wider context of Bordeaux, there is one overriding factor that really makes Lafleur different and distinct from many of its neighbours. It comes down to the unique varietal Chateau Lafleur has spent a huge amount of time bringing back from the brink of extinction. The varietal is Bouchet and it is perhaps best understood as being the original pre-clonal Cabernet Franc varietal grown in Bordeaux prior to the great frost of 1956.

The Great Bordeaux Frost of 1956

Omri goes on to explain that the great frost of 1956 was the last devastating blow to the Bordeaux region which led to a major restructuring of the regions vineyards. Prior to this the introduction of diseases from the Americas - odium and phylloxera - in the late 19th century, followed by the negative effects of the economy and the agricultural industry in Bordeaux following the two Great Wars, and the financial crisis of the 1930s had left Bordeaux desolate. By the mid-fifties however, Bordeaux wine production had started to recover. That was until the great frost of 1956 saw consecutive days of black frosts below -20 degrees, completely decimating huge areas of Bordeaux. Pomerol was one of the worst hit areas, with up to 90% of all its vineyards destroyed. Omri talks about how at these temperature the sap within the vines freezes and the vines effectively implode, completely destroying the plants.

The damage was so immense that a huge rescue plan was initiated by the French agricultural department. Part of its plan was to secure against any further loss of yields, allowing only certain varietals and certain clones to be re-planted. The French government pushed for all of the Right Bank to be replanted with the more reliable and higher yielding Merlot clones over and above the more qualitative Bouchet. Similarly the government encouraged the Left Bank to be replanted with Cabernet Sauvignon. The Bouchet varietal therefore became almost completely extinct. This replanting also coincided with the introduction of machinery in the vineyards which led to vines being planted at much lower vine densities to allow for tractors to pass through the vines, greatly reducing the quality of the fruit in these newly planted vineyards.

At this point, very little of the Bouchet vines survived the frost and today it is believed that just Chateau Lafleur, Chateau Ausone, Chateau Cheval Blanc and a few vines in Chateau Angelus remain. It was then that Chateau Lafleur first committed to not only protect their remaining vines of Bouchet, but to propagate them and create their own heritage nursery of Bouchet vines in order to protect the almost lost genetic make-up of the varietal. This heritage nursery was set up at their sister winery, Chateau Grand Village just north of the Fronsac appellation, as a project to protect the future of the varietal, making sure it remains central to the DNA of Chateau Lafleur. Their nursery now contains 8,000+ vines, originating from the 117 separate variations of the Bouchet varietal originally propagated from the Chateau Lafleur vineyard. Unfortunately due to disease and virus, only 67 of the original 117 still survive, but this produced exceptional diversity within their own homemade Massale Selection of Bouchet. Omri believes this is something that will protect the Lafleur legacy in generations to come. For Omri and the team at Chateau Lafleur, diversity is the key to preservation and this is a return back to more traditional pre-industrial methods of protecting one’s harvest and heritage.

The Preservation of the Bouschet Varietal

For Omri this original clone of Cabernet Franc is quite different from the current genetic clones of Cabernet Franc that are currently being planted in Bordeaux. These are commercial clones, originating from the Loire Valley. Omri believes this pre-clonal selection varietal behaves very differently to its modern Cabernet Franc cousin. For a start, Bouchet is much more drought resistant which means it has performed much more evenly in the recent droughts in Pomerol over the last 5 years. Secondly, the taste and the colour he believes are completely distinct. He describes the original as somewhere in the middle between Cabernet Sauvignon and Merlot. It has the tannic structure of Cabernet Sauvignon but the tannins are less blunt and more refined. It is also much better at keeping the freshness than Merlot and it doesn’t have any of the green pepper herbaceous notes of the commercial clones of Cabernet Franc. Chateau Lafleur did have more modern clones of Cabernet Franc Omri explains that even on the top gravel soils of Lafleur, these modern clones were producing only simple, uncomplicated fruit and the decision was made to replant with better clonal material. He states that there are 31 clones of certified Cabernet Franc in France and none of them come close to the quality of Bouchet.

Yet Omri insists Bouchet is not enough on its own. He and the Chateau Lafleur team are committed to protecting the long-term future of the vineyard as well as protecting the DNA that makes Lafleur distinctly Lafleur. But it is not just Bouchet - Merlot too remains an important ingredient in the blend and the team have gone to great lengths in recent years to make sure their Merlot performs as well as their Bouchet. Some of their best plots are pre-clonal developed Merlot vines producing some of the finest fruit on the whole property.

Omri is very honest about mistakes that have been made in the past. 4.58 hectares make up the Chateau Lafleur estate - including their other wine, Pensees de Lafleur, a single 0.69 hectare plot within the centre of the Lafleur vineyards that has a distinct sandy/silt soil, which they deem is quite different to the surrounding Chateau Lafleur terroir and is therefore bottled as a separate wine under a different name. The entire vineyard is sub divided into separate parcels of which, up until recently, 6 or 7 of these parcels had been seriously under performing, producing substandard fruit and deteriorating the final blend.

It has been a huge project to identify these plots and replant. Omri believes the problem resulted from the mediocre genetic material picked during the time when the French government were promoting sub-standard clones following the frosts of ‘56. After identifying these under performing plots of Merlot they were re-grafted. As recently as 2014, 3 parcels were re-grafted replaced by their own Massale Selection of Bouchet varietals (produced at their heritage nursery at Chateau Grand Village).

When asked what the other secrets behind Chateau Lafleur's unique DNA are, the unsurprising response is: "being in the vineyard". Omri states that great terroir is not enough, you need to see what is happening every day in the vineyard. You have to understand how the different vines react to the weather and climate. You need to know your vines, identifying which ones under perform and why, and understanding different rates of ripening which vary from one parcel to the next.

Chateau Lafleur produced one of the top wines in 2018 receiving maximum scores from the Wine Advocate, James Suckling, Vinous and Jeb Dunnuck. Yet when discussing the 2018 vintage, it's clear it was a difficult vintage to manage. The two extremes of the vintage - the mild rainy weather during the spring, followed by a very dry and sunny summer - could have potentially worked against each other to produce a wine totally out of balance. Fortunately this was not the case, but it was a vintage that produced a huge quantity of tannins and this meant huge restraint was necessary in 2018, particularly in Pomerol. This was certainly not a vintage that made itself.

Bordeaux continues to follow fashions and whilst the days of high extraction and high ripeness are largely over, there is a danger that some wineries are going the other way and not picking wines ripe enough, nor are the tannins reaching optimum ripeness and therefore they are not fully resolved. According to Omri, Bordeaux needs to sit somewhere in the middle between power, intensity, complexity and finesse. He states that Chateau Lafleur has never followed fashion, through the vintages you can taste the Chateau Lafleur DNA: “Restrained power, flavour complexity and intensity, yet elegant, pure and long. If you look at the alcohol levels of 2015 for Lafleur it sits at 14.5% ABV yet the wine is perfectly balanced. Chateau Lafleur plays with all these components to work in a harmonious way”.

The preservation of diversity and their micro-plot management system has gone a long way to not only producing a fine wine in 2018 but in preserving the legacy of Lafleur for the future. Whilst Chateau Lafleur is released in tiny quantities and demand far outstrips supply, we are also excited about the release of their Chateau Grand Village wines to be offered in the coming weeks. Chateau Grand Village is in fact the historic winery of the family which they have owned since 1852. The Grand Village takes the DNA of Lafleur - exactly the same Massale Selection of vines from their heritage vineyard that are used in Chateau Lafleur - but instead of being grown on the Pomerol clay soils, instead they are grown on the limestone soils found north of Fronsac. The wines carry the same DNA as Chateau Lafleur but produce wines completely altered by their terroir. These are beautiful wines, meticulously made and should not be missed on release. 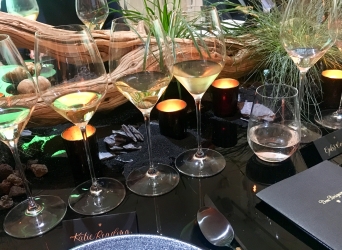