EditorialvinesChateau Brane Cantenac - Behind the Bottle

Chateau Brane Cantenac - Behind the Bottle

Chateau Brane Cantenac has been a consistent performer in Margaux since Henri Lurton took over the property in 1992. But in the last decade the quality has taken another sharp upswing. Even in a mixed vintage like 2014, Brane produced a beautiful wine. 2015 and 2016 were both outstanding and arguably some of the best wines ever made at the property and 2017 was also a real highlight for the appellation. Finally, the 2018 is another exceptional vintage for Brane with its house style elegance and finesse and no shortage of flavour allied with a complex tannin structure that is incredibly interwoven and broad. Perhaps the most impressive element of Brane’s 2018 is the incredible length, which is full of scented exotic aromas and flavours.

We spoke with director of the Chateau, Christophe Capdeville, to find out what has taken this one time consistent performer to one of today's very top producers of Margaux. The obvious answer was - the terroir! From the Chateau we looked out over their main central plot on the Cantenac plateau. This 32 hectare single site has soil dominated by what they describe as “Terrace No 4 soils”. This refers to a soil structure that was formed in an ancient geological era, made up of the ideal combination of clay and gravel for even ripening of Bordeaux varietals. The gravel in the soil goes down to a staggering six to eight metres! The Terrace 4 soil exists in parcels right through the Medoc and unsurprisingly exists where almost all of the top chateaux on the left bank have the majority of their vineyards. It starts at the Cantenac plateau across to Rauzan Segla, Margaux and then appears again in Saint Julien around the vineyards of Leoville Las Cases through to Pauillac, Pichon Lalande, Latour, Lafite, Mouton all the way to Cos d’Estournel in Saint-Estephe.

This terroir plays the biggest role in determining the quality of grapes. For Christophe, the combination of clay and gravel in this site not only produces the most even ripening of the grapes compared with neighbouring Terrace 3 and 5 soils. It also provides the greatest quality of tannins, finer in texture than Terrace 3, for example, in which maceration needs to be carefully managed and can easily be over extracted producing harsh tannic wines. Anyone who has lots of Terrace 4 soil, at least has the potential to produce some of Bordeaux’s finest Cabernet Sauvignon. Of course, having the top terroir is a key element but as we know, if poorly managed, the wine quality rarely hits the top level of its peers. 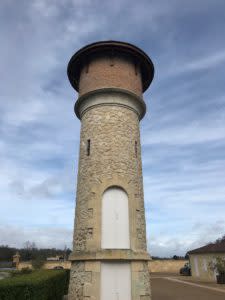 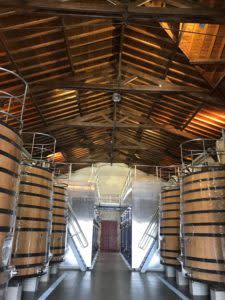 Another key factor that Brane Cantenac have taken very seriously is replanting. Feeling the effects of global warming in Bordeaux the team at Brane are concerned about the acidity levels being too low and alcohol levels being too high for growing Merlot in the region. Its susceptibility to mildew in more humid conditions is also an issue. For Christophe, warmer damper seasons in Bordeaux (brought about by global warming) have seen the quality and quantity of Merlot dropping. They have therefore been re-grafting a lot of old Merlot vines with Cabernet Sauvignon, and upping the percentage of Cabernet in their Grand Vin compared to other Margaux estates. The 2018 consists of 74% Cabernet Sauvignon and just 23% Merlot. They are also growing more Carmenere, Petit Verdot and Cabernet Franc – varietals that benefit from the warmer temperatures brought about by global warming.

Another key qualitative element introduced at Brane Cantenac is barrel by barrel evaluation. With plot by plot vinification now standard in top Bordeaux Chateaux, Brane Cantenac have mirrored this attention to detail in the vineyard with the same principles in the winery. Each barrel of wine is evaluated separately and depending on how it tastes, it will receive different treatment. They are doing more and more integral vinification in which the wines are barrel fermented and colour and tannin extraction done by either rolling the barrels, pigéage, or rack and return - all depending on what the individual barrel of wine requires. 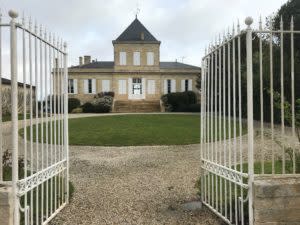 The Brane Cantenac vision in the winery is to look at every vintage differently. Rather than following a set formula each year they wait for the grapes to tell them what to do in the winery, particularly with Cabernet Sauvignon. Depending on the vintage and the specific plot, each one has very different personalities and requires different approaches when it comes to élevage.

Being the first people outside of the Chateau to taste the 2018 vintage was a real honour and the wine was sensational. Christophe is ecstatic about the vintage describing it as having the concentration of 2010, the density in the mid palate of the 2015 and the length of the 2016. The aromatic complexity is stunning and has to be up there as one of the best Brane Cantenacs ever made. 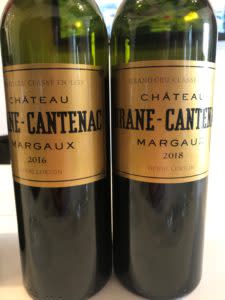