EditorialvinesA Taste of The Northern Rhone 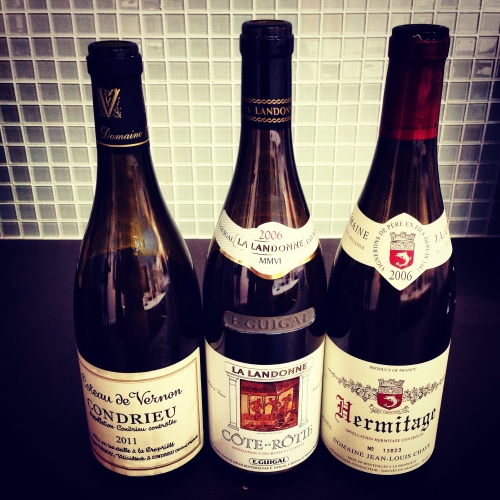 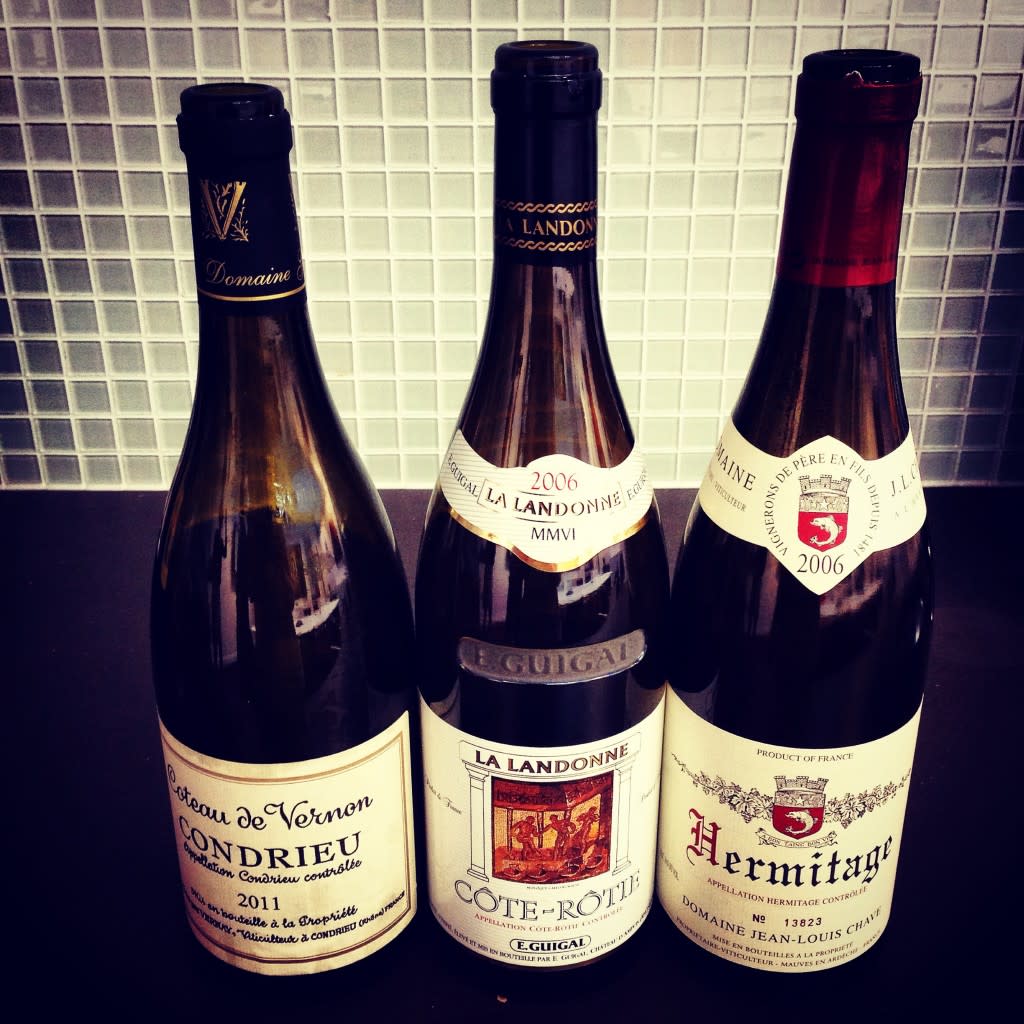 The northern and southern Rhone, from a vinous point of view, are essentially two quite different regions with a shared name. Some weeks back we covered the southern Rhone in a previous workshop, via its King: Chateauneuf du Pape.  We ended last week with a workshop on the north. This 40-mile stretch of steep, sloped granite hillsides is one of the most difficult landscapes to farm in the wine-world and unsurprisingly it produces a mere 4-5% of the Rhone’s total production. The varied grape varieties grown in the vast southern valley dwindle to just two noble varieties in the north: Syrah and Viognier, which go to produce the great wines of Cote Rotie, Hermitage and Condrieu AOCs, as well as Crozes-Hermitage, St-Joseph, Cornas and Ch.-Grillet.

Condrieu Condrieu is a 10 mile stretch of hillside with 117ha divided into roughly 65 producers. The top vineyards are the coteaux of Vernon and Chery and it is worth looking out for the wines of, amongst others: Georges Vernay, Francois Villard, Yves Cuilleron and Pierre Gaillard. Classically, Condrieu - 100% Viognier - is an exotically perfumed, oleaginous, rich wine with low-acidity; however, varied picking dates, use of oak and malolactic fermentation make for diverse styles, so it is worth getting to know the producers and their styles.

We tasted the 2011 Georges Vernay Condrieu Coteaux du Vernon which is circa GBP 75 per bottle IB.

Coteaux du Vernon is a renowned cuvee produced from 80 year old vines, aged in 25% new oak for 18 years. Only 500 cases of this are produced. Jeb Dunnuck described this 2011 as “An off-the-charts Condrieu that does everything right… pure class…One of the top examples of the variety I’ve tasted” and scored it 98 points*. *We agreed:

*“Stunning, rich and expressive nose of fresh apricot and peach, lemon, butter and summer flowers. Full-bodied with a waxy texture, exotic fruits and peach dominate on the seamless palate. The acidity balances the richesse with freshness. Impressive length.”* FINE+RARE

Cote Rotie These ‘roasted-slopes’ make up the most northerly appellation of the Rhone, where 250ha of vines are planted on exceptionally steep slopes – the best of which are the Cotes Brune and Blonde. Home to some of the more pricey Syrah’s, the appellation has undergone a renaissance after the famed producer Guigal almost single-handedly built up a reputation of prestige over his cult ‘LaLa’ wines. Other top Cote Rotie producers to look out for are: Jamet, Rostaing, Michel Ogier, Pierre Gaillard, Clusel-Roch, Vins de Vienne, Vidal Fleury.

Predominantly 100% Syrah, the appellation’s law allows for a small proportion of the aromatic Viognier - to provide a little perfume – hence it being known as the more feminine wine of the north.

Guigal is the largest land owner in Cote Rotie producing the three ‘LaLa’s’ and Cote Rotie d’Ampuis. Thanks to the low yields and uniquely long maturation (42 months) in 100% new French oak, the single-vineyard ‘LaLa’s’ have become some of the most sought-after wines in the world. As a trio, they have the highest number of perfect 100 point scores from Robert Parker.

Unusually, each 'LaLa' is produced differently owing to their idiosyncrasies:

This “extraordinarily pure and rich" 2006 scored 97 points by Robert Parker.

*“Rich, dense, concentrated nose abounding with masculine notes of roasted meat, earth and charcoal. Crème de Cassis with top notes of woody herbs, this is a big, full-bodied and powerful wine, yet has a focussed purity. It needs time, but will be very special.*” FINE+RARE

Hermitage Hermitage is one of the most famous wines, which takes its name from the 150ha of vines that makes up the hill of Hermitage. The hill can be divided into Les Bessards and Le Meal and the styles can be split by producers – those that blend between sites and those that make single-vineyard wines. Typically, these are masculine and full-bodied in style with meaty aromatics, which develop complexity and finesse over their long life. Producers to look out for are JL Chave, Chapoutier, Jaboulet, Delas, Colombier.

Chave is one of the oldest estates in the wine world, dating back to 1472. Blending Syrah from Bessards (for backbone), Meal (for warmth), as well as: L’Hermite, Peleat, Beaume, Dionieres and Vercandieres, wines from each lieu dit are kept separate for most of the elevage. Chave produces Hermitage Blanc: 80% Marsanne and 20% Rousanne (1,000 cases produced); Hermitage Cuvee Cathelin from an idyllic plot in Les Bessards (125 cases produced only in top vintages) and Hermitage Rouge, which we tasted, sourced mainly from Bessards (2,000 cases produced).

Robert Parker scored the 2006 96 points, saying it “reminds me of Chave’s brilliant 1991” and is “superior to 2007”. Neal Martin said “Fantastic. The kind of wine that leaves you desperate for an original superlative!”, scoring it 97 points.

Both the Cote Rotie and Hermitage tasted here, bolster the school of thought that marks 2006 as one of extraordinary quality - perhaps even better than the iconic vintages of 2005 and 2007. The wines are well structured with finesse and are particularly expressive of their individual terroir and character. This certainly makes the top wines of 2006 look relatively undervalued on the market.

If you are interested in any of the wines mentioned here, or would like to know more about the producers, please do not hesitate to get in touch. 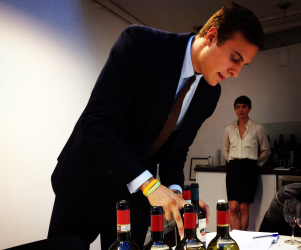 What Happens When Wine Royalty Comes to Visit.....