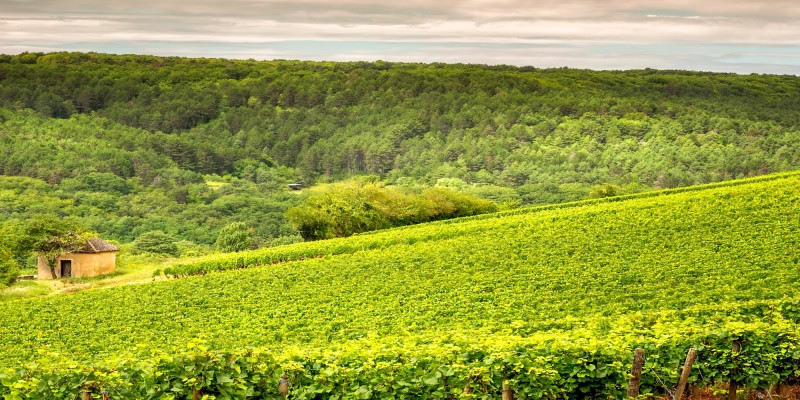 Simon Davies, Head of Marketing at FINE+RARE, shares his thoughts on the 2010 Burgundy vintage following his trip to the region last week.

A week of tasting close to 300 wines across 19 different domains from Gevrey in the north of the Côte de Nuits to Givry in the Côte Chalonnaise has given me a very clear picture of the remarkable 2010 Burgundy vintage.

I use the word “remarkable” because on the face of it 2010 had a difficult birth. A very cold 2009/2010 winter blasted the region and left vines (especially those with more shallow root systems) in a weakened state. The early spring started well enough but cold weather during flowering resulted in a poor fruit-set (for both colours) and thus a small number of berries per bunch. The summer was warm and dry but never hot and while there wasn’t much rain, there also wasn’t much sun. This allowed the crop to ripen very slowly into the middle/end of September (110+ days from the flowering) and kept acids relatively high and the fruit character firmly in the “fresh” camp. The berries tended to be small with thick skins, which has given the reds tremendous colour and structure and the whites lovely concentration and texture. So while it may not have been a brilliant summer, the tiny crop and dry conditions meant that the grapes were perfectly ripe and concentrated.

At the end of his last edition Allen Meadows asked the question “is 2010 better than 2009?” The answer isn’t quite as straightforward as you might think. In my opinion 2009 is a wonderful early drinking vintage which has the stuffing to age well. 2009 is especially successful at the lower end; the Bourgognes, Hautes Côtes and lower villages wines (Savigny, Pernand etc) are extremely delicious in 2009. For the top single vineyard 1er and grands crus, 2010 is the clear winner. The cool, long growing season has allowed each vineyard in the best sites (essentially all of the Côte de Nuits and the better 1er and Grand Crus of the Côte de Beaune) to express themselves to the maximum. The wines have a freshness similar to the 2008s, a concentration reminiscent of the 2009s and a fruit character similar to 2002. In the Côte de Nuits, which typically was harvested before the Côte de Beaune, we really are talking about a near-perfect vintage. The difficulty is to do with quantity; yields are down 30-40% against average and even more reduced against the large 2009 crop. A typical producer who produced 13 barrels of something in 2009 probably only has 7 barrels this year.

There is also a lot to like in the whites. Burgundy seems to pick a different fruit character for each vintage: 2007 = lemon; 2008 = greengage; 2009 = pineapple. For me 2010 = grapefruit which is a pretty good place to be I think: ripe citrus yet still with plenty of freshness. The long growing season and low crop means there is a salty tang of mineral in the best wines and terrific length. For those who still have the confidence to age white Burgundy these would be ideal candidates. I especially liked the Chassagnes this year (I usually favour Puligny) because of their tremendous fruit, laced with lean mineral.

As always the wines from Bernard Gros at Gros Frere & Soeur are very fine: fresh, rich and very lovely. He has changed his elevage so that for all wines now he uses 100% new wood made from Bertrange oak, which he buys 3 years in advance. Bernard avoids using old wood because he wants to decrease the risk of bretanomyces affecting his wines, a common issue with old barrels. To mitigate the oak character he only keeps the wines in wood for 12 months before racking into tank. It will be interesting to see how this works for a less concentrated vintage (2011) but in 2010 it seems to have worked beautifully. The oak adds just a touch of seasoning rather than anything more prominent.

Down the street at his cousin Anne Gros’ place is the best collection I tasted on this trip. Her wines are delicate, precise, energetic and frankly other-worldly. My advice to you is clear: do whatever is necessary (and I mean whatever) to get a bottle of her Richebourg.

Thankfully it’s not just Anne who has hit a six this vintage. The big houses have also done wonders. Jadot is still number 1 of the big boys and the top 2010s are genuinely wonderful. Their Clos de Beze is not just the best wine I tasted on the trip, it’s among the very best Burgundies I have ever tasted.

Faiveley too have done very well. Perhaps a little too much oak for my personal taste but certainly not overblown. The wines are so sweetly fruited and so silkily textured that you can forgive the lick of wood.

Likewise Drouhin’s 2010 are very impressive: deeply concentrated yet supple and lively. I loved the Montrachet Marqius de Laguiche and the Vosne Petits Monts, but the Musigny and Bonnes Mares were flat out amazing. It was like the mid-palate had been stretched such was the depth and breadth. Wow!

Nicolas Potel at Roche de Bellene has crafted a vast range of utterly delicious wines; so accessible and fruit driven it is impossible not to want them!

Another very interesting domaine belongs to Pascal Marchand, who is a micro-negocient in Nuits St Georges. Pascal was the winemaker at Domaine Comte Armand for 14 years and has (since 2007) been running his own show. Burghound is a big fan and once tasted I think you will be too. The wines are the complete opposite of Potel’s: they are firm, introverted, intellectual and utterly compelling. Marchand has got some top wines (Clos St Denis, Mazis, Clos de Beze, Musigny etc) so the domaine is definitely one to keep an eye on.

For the second year I visited Drouhin Laroze. The wines were sensational but quantities are miniscule. There is however an alternative. Philippe Drouhin has founded a negocient business for his daughter Caroline to run. The wines are made in the same way, in the same cellars from bought in fruit. To be honest there is no quality difference between these (labeled Laroze de Drouhin) and the domaine wines. I especially liked her Charmes Chambertin and Mazoyeres Chambertin.

Regis Forey has continued his move away from mega-extracted wines with a lovely collection of 2010s. His Vosne Les Gaudichots (the 1er Cru bit of the greater vineyard of La Tache) is of top grand cru quality; I rated it 19/20. A taste of his 2006 Les Gaudichots, which was quite frankly murdered by the tannin, shows how far he has come.

We will be offering the majority of wines in January. However there will be a few significant releases over the next couple of months including Louis Jadot which we will be offering later on this week. Please feel free to contact me for more information.