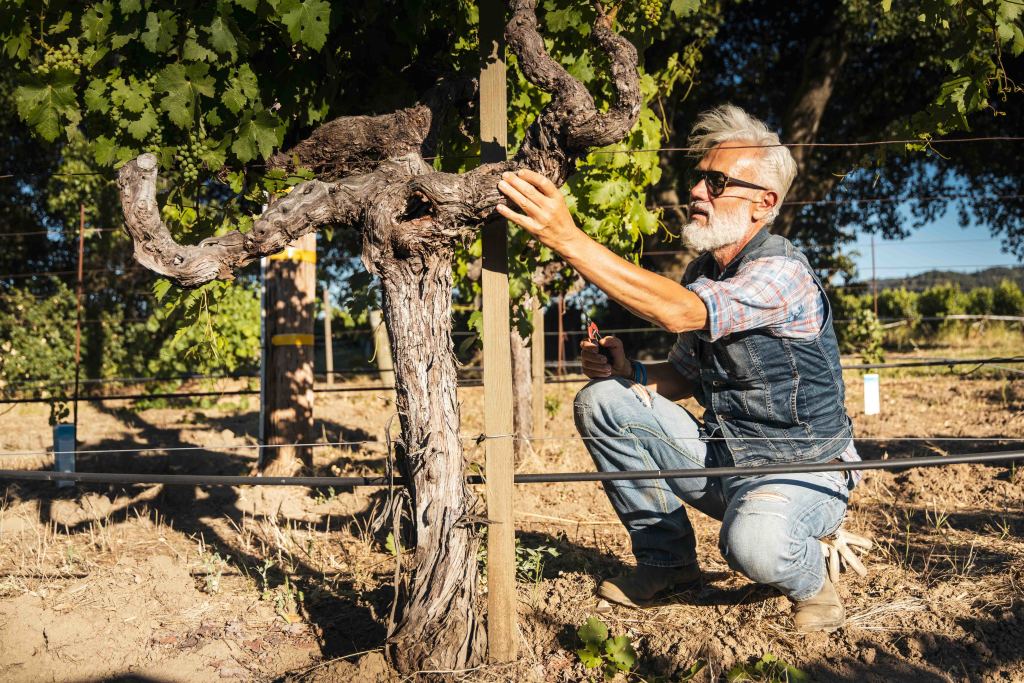 Marco Simonit has been at the forefront of modern viticulture techniques aimed at protecting old vines from disease and decay ever since vineyards worldwide became crippled by ever-escalating levels of vine disease in the last decade. Since the ban of chemical preventions came into practice across Europe in the early 2000s, vine disease has grown to epidemic proportions, including in some of the world's most prized vineyards. Marco's methodology of using non-invasive, gentle pruning techniques and shunning any chemical additives has brought him many endorsements from wineries around the world. He has advised at over a hundred wineries and currently has a team of 25 international consultants working for him, including at top estates such as Domaine Leroy, Chateau d’Yquem and Champagne House Louis Roederer.

The importance of protecting old vines is multifaceted. First and foremast it promotes sustainable viticulture without an over-reliance on water and chemicals required in resource-intensive replanting schemes. Secondly it produces grapes with a true blueprint of their terroir. Old vines with deeper roots produce a flavour profile distinct to a specific place; they are also much less affected by vintage variation. It is widely accepted that old vines' naturally lower yields create wines of greater complexity. In an interview conducted just weeks before lockdown began, Marco outlines the philosophy behind the L’Età Più Bella (With Age Comes Beauty) range of wines. 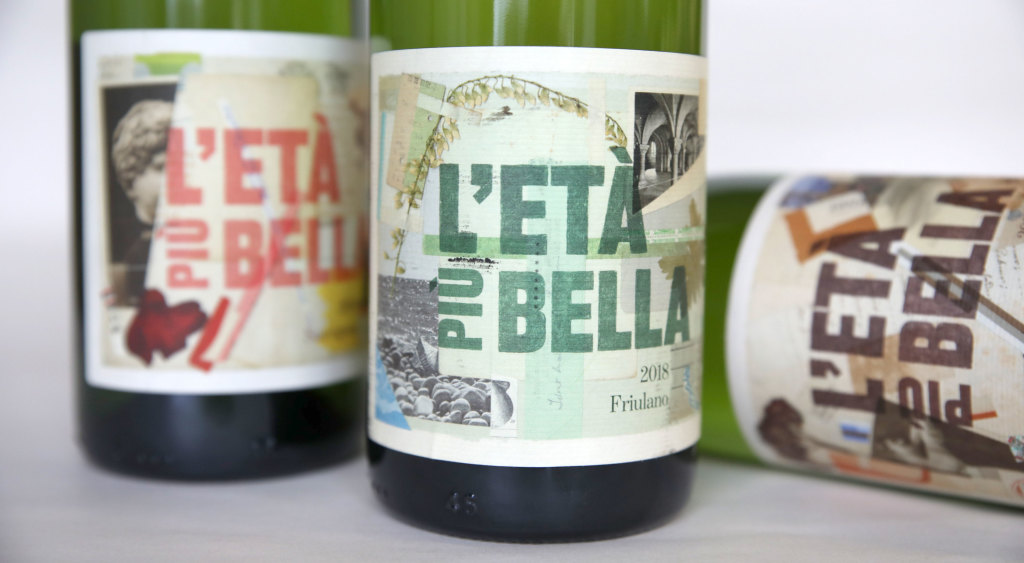 L’Età Più Bella (With Age Comes Beauty) is a collection of wines produced entirely from old vines from Marco Simonit’s home region of Friuli – arguably Italy’s top region for white wine. Marco states “the idea of the project is to identify the distinct character one gets from wines made exclusively from old vines. It also provides a true terroir blueprint of that vine. More than that and what is the key impetus behind the project was to produce something that would come to be a physical embodiment of the Simonit&Sirch philosophy.” This project has been a dream for Marco over the last 20 years. “By having a bottle of wine on the table I hope it will create conversation about the world we live in, the environmental issues that surround food and wine production and the efforts made to make such production sustainable.”

The importance of protecting old vines is multifaceted. Marco states, “First and foremast it promotes sustainable viticulture without an over-reliance on water and chemicals. Old vines with deeper roots are effectively dry grown – with the deep roots feeding from water locked into the soils. Young vines (depending on the climate) rely on irrigation in their early years and continual replanting of young vines leads to a huge increase in water requirements.”

"Vines have to be stronger and self-sufficient if they are to survive the increasing climatic pressures. The current volume of fertilisers and water is not sustainable in the long-term future."

“Fundamentally the project is to provide sustainable viticulture under the threats of global warming.” Being organic / biodynamic, according to Marco, is not enough in the light of current threats to the environment. "Vines have to be stronger and self-sufficient if they are to survive the increasing climatic pressures. The current volume of fertilisers and water is not sustainable in the long-term future."

Old vines are also are not only more sustainable in terms of water requirements but are also self-sufficient when it comes to nutrients not needing to rely on chemical fertilisers to keep the plants operational. Marco explains “a healthy vine (free of pathogens) has much more live wood on the vine which means much healthier capillaries and is therefore much more resistant to the stress and strains of the growing season – whether that be pathogenic fungal disease, hydric stress or other diseases typically found in a vineyard.” 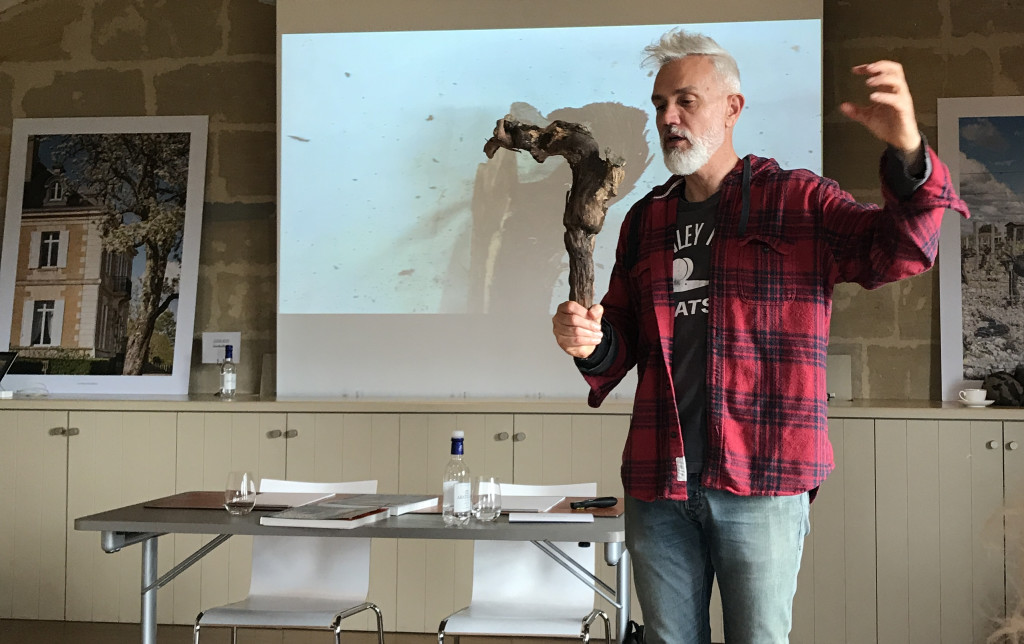 Educating the vigneron and the wine lover

For Marco, this project is a plea for wine lovers to understand the fragility of future production in many fine wine regions of the world. “In the world there are old vineyards at risk of being uprooted, or not valued. In this case it is their uniqueness that makes the difference and I want the L’Età Più Bella range of wines to become a means of talking about the importance of vines reaching advanced age (an approach completely at odds with many producers in Italy currently). I want to make people understand through a product how important these ancient vineyards are, and how through tasting the wines one can go deep into the territory, the vineyard, and the single plant and its conditions of health.”

Marco explains, “there is no mass approach when dealing with vines like these, all plants are different, just like men and animals. The extraordinary work is to understand plant by plant how many bunches, how many leaves to leave, whether to trim and in what way. Soils are analysed, fundamental for maintaining the radical system. It takes a lot of energy, willpower and time because the individual plants are treated within the vineyard, and then you have to be severe: the grapes entice you, but you have to respect the plants as individuals.” 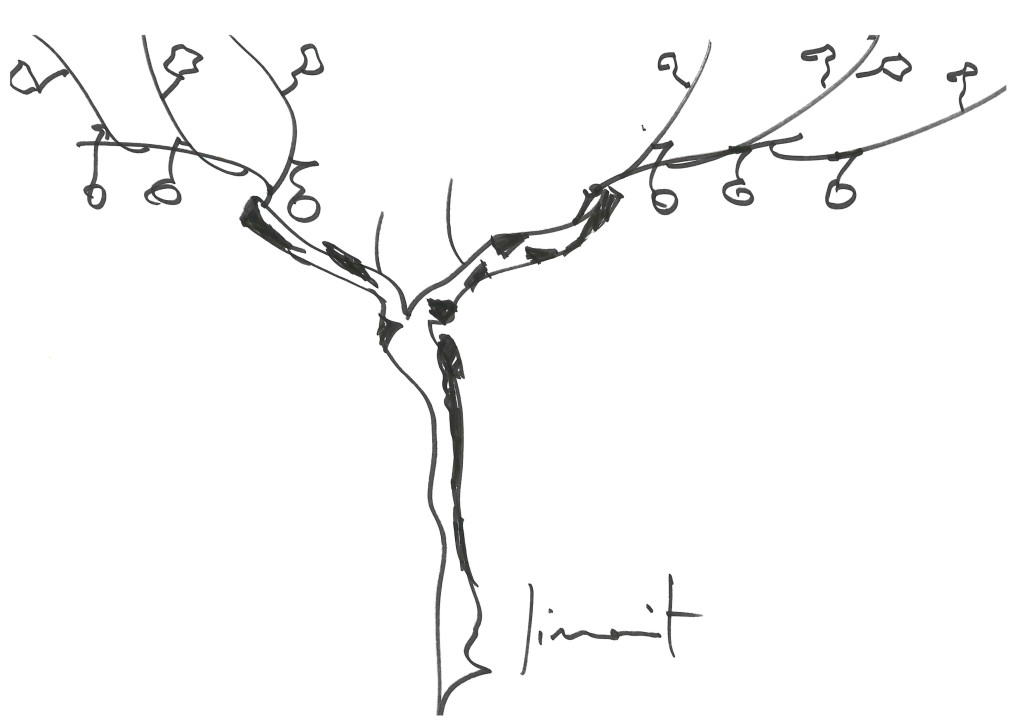 A vine sketch by Marco

Vine pruners as a skilled workforce

More than that, Marco wants the project to be an opportunity to bring focus on the region from where the wines come originate, as well as the growers who produce the grapes. “It is important for me to have consistent relations with growers who share the old vine philosophy and values and have a detailed knowledge and approach to their vines. But the project also brings the philosophy to the growers. By producing the wine, the growers themselves become further involved, recognising the benefits of the preservation of the old vines and how these wines would further promote their region.”

“Training up pruners has become part of a social responsibility... not only improving the health of the vines but also creating a skilled workforce"

An additional benefit that has stemmed from the old vine project and the adoption of Marco Simonit’s gentle pruning techniques is that it has reawakened the craft skills of traditional vine pruning that have been lost due to the introduction of chemical and machine farming during the latter half of the twentieth century. Marco Simonit’s pruning school and one to one consultancy with vignerons and their workers all over the world have introduced new skills to individuals that have been underappreciated as part of a low-paid, unskilled workforce, often working in poor conditions and with minimal social support as is the case with many seasonal workers.

“Training up pruners has become part of a social responsibility," explains Marco, “not only improving the health of the vines but also creating a skilled workforce that through vine protection and a reduction in chemical use has been a financial benefit to both wineries and their workforce”. Marco states “the social impact of training vineyard workers has been recognised by government initiatives in Europe who have worked with us to help increase the skillset and employability of immigrants in parts of Italy with the end result having a beneficial effect on their individual lives and the communities involved.”

“Where better than to start” he states, "than in my home region of Friuli in Northern Italy". A region whose reputation continues to grow and is now widely recognised as the country’s finest for top white wine which competes with some of the finest in the world. They make pretty good red wines there too. Born and raised in Friuli, Marco couldn’t think of a better place where he could bring the philosophy to life: “Friuli needs a project that speaks about Friuli.” 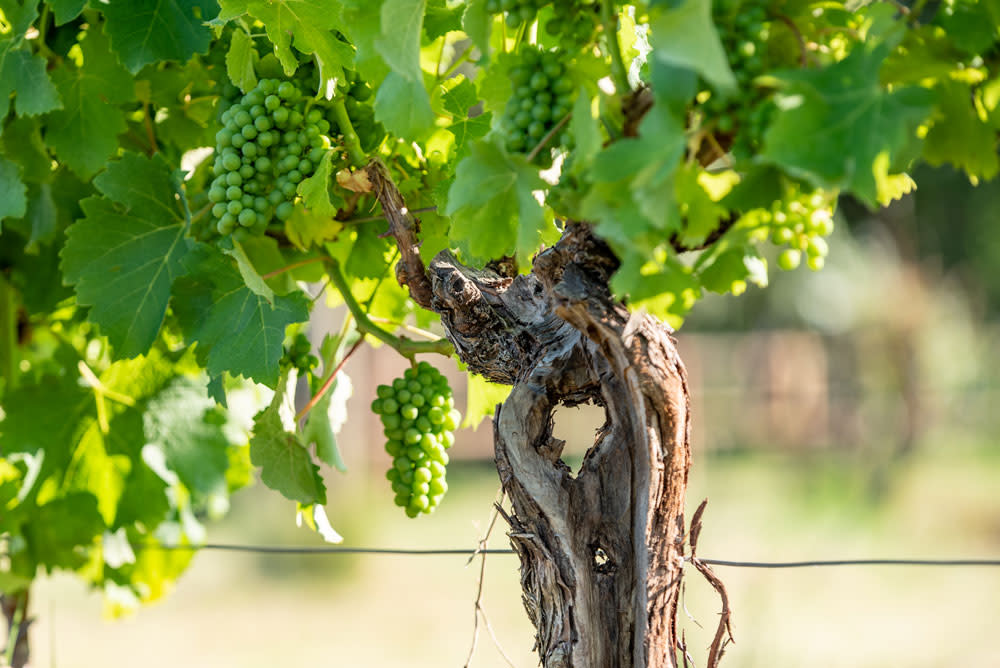 30 years is an old vine (for Sauvignon Blanc)

A common issue in vineyards around the world today is vines dying at just 20 years of age, requiring them to be pulled out and replanted. The vine is not even operational in terms of production for at least 3 years of growth. The longer the life of the vine can be extended, means a huge reduction in both economic as well as environmental pressures. At 15-20 years old, the vine will have good adaptation to its soil, consistency to its production and will be much more self-sufficient.

“The Sauvignon comes from a 30-year-old vineyard, but 30 years may seem young in an 'old vines' context but 30 years for Sauvignon is a lot. For example, Sancerre vines have a maximum lifespan of 25 years. And it is very rare to find it older than this, it is one of the most sensitive varieties to diseases. Speaking of the pandemic, since we are on the subject, there were the pandemics of Sauvignon and Cabernet Sauvignon: they are the most sensitive varieties to diseases, there were international experts who have tried to investigate this theme. In France for example the producers that lost their plants to disease, planted younger plants, and they made wine from old and young plants together, but the wine was no longer the same. Because the difference is made by the wine that is obtained only from the original plants, without the 'interference' of the new plants.

"It is no longer enough to say that you are 'bio' to guarantee a good job, you need to do a lot more to be sustainable. And our job is to tell everybody this.”

Sauvignon gets sick from pruning wounds, fungi enter that destroy the plants and kills them. It is very difficult to find single original Sauvignon plants. That is why the Simonit&Sirch method performs pruning cuts that do not ruin the path of the lifeblood of the plant.

Ultimately we want to tell these things through wines. With a point of view that no one has ever taken into consideration, because we invest in people and because we respect the plants over time.

It is no longer enough to say that you are 'bio' to guarantee a good job, you need to do a lot more to be sustainable. And our job is to tell everybody this.” 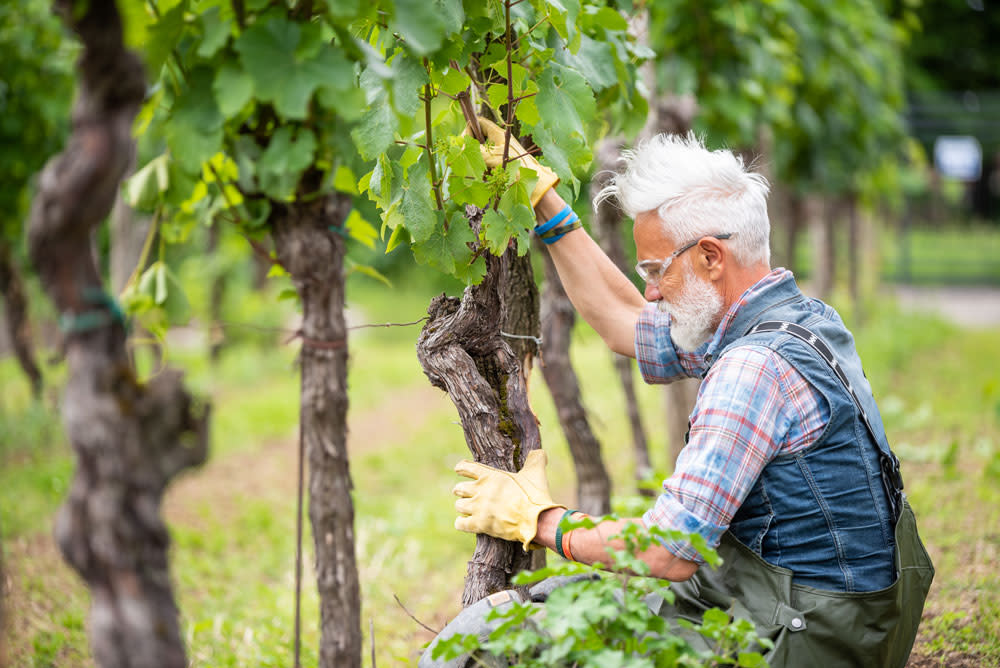 An additional and worthy benefit at the premium end of production lies in an old vine's ability to produce grapes with a true blueprint of its terroir. Marco agrees with Lalou Bize-Leroy’s philosophy that a true terroir of a particular site requires a vine that is at least 15 years old, since a well-established vine produces a wine that is more about the soil than the individual characteristics of the sun. Old vines with deeper roots are also much less affected by vintage variation. These are wines made from their roots rather than wines made from the sun.​​

For Marco the importance of the project lies in “the increase of education, sensibilities and sustainability. The importance of my pruning technique is understanding that, left alone, vines will survive very well. The problem lies in when the vine is domesticated and such domestication, if done badly, can weaken the vine, increase the pathological stress to the plant, leading to an early death.”

The 2018 L’Età Più Bella collection is available from next week, exclusively distributed by FINE+RARE. 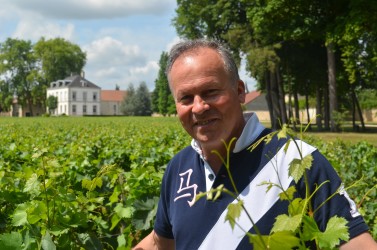 Domaine de Montille: The Genealogy of the Estate