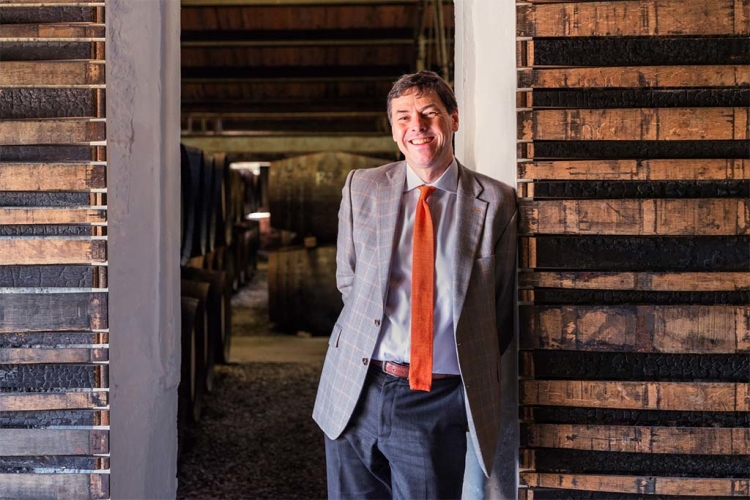 Glenmorangie and Ardbeg are two Scotch whisky brands famed for quality and innovation. Behind every bottle is the heart and mind of one man: Dr Bill Lumsden. He talks to Holly Motion about what it takes to be at the distilling vanguard for decades

It’s not often words fail me. But finding the right words to describe Dr Bill Lumsden to those who haven’t had the great fortune of meeting him has rendered me a little dumbstruck. Many have dubbed him the “Willy Wonka of the whisky world” for his creativity, jaunty style and flair. His latest project, a purpose-built home for innovation named the Lighthouse, where Lumsden can innovate to his heart’s content and create all manner of whacky and category-bending whiskies, somewhat perpetuates this narrative of the eccentric whisky-maker.

But, I’d argue, the good doctor is far more than this. He is, first and foremost, an incredibly accomplished scientist. His work at Glenmorangie and Ardbeg over the past 26 years – maintaining the iconic distillery characters and launching innumerable products for each – is nothing short of sensational. He is a workhorse, as well as, it would seem, a bit of a clothes horse.

“I’m a bit of a shopaholic,” he tells me with glee. “I love buying clothes.” This isn’t the sort of confession I expected when sitting down with the Director of Distilling, Whisky Creation & Whisky Stocks in November last year.

“If something’s in fashion, I wouldn’t be caught dead in it because other people are wearing it,” Lumsden continues. “So I tend to wear things which have been out of fashion for many years or are yet to be in fashion – and it’s just a little facet of my personality, unfortunately.”

This, while slightly unexpected, actually makes a great deal of sense when you cast an eye over his professional life. Lumsden has always been the trendsetter rather than the disciple. And he’s quick to assert that his avant-garde attitude extends beyond apparel.

“I have absolutely no interest whatsoever in what’s in fashion and what’s not in fashion [in the whisky industry]”, he says. “When I’m doing something it really is all to do with will I like the taste at the end of the day? Will it complement that character of the Glenmorangie or the Ardbeg spirit?”.

Since joining Glenmorangie in 1995, Lumsden has been charged with “maintaining and hopefully slightly improving the spirit character” and innovating. While once his role was divided equally between these two tasks, new product development and innovation now take up the majority of his time.

“It’s got to the stage now where the demand for new products is almost impossible to keep up with,” he says matter-of-factly. While this might be fatigue-inducing for some, this constant pressure to innovate exhilarates the inquisitive doctor.

“I’m a scientist by training,” he explains. “It’s in my blood to experiment, and I’ve always been a curious individual who gets bored very easily and likes to try new experiences, in every aspect of my life. So the move to Glenmorangie was heaven-sent for me from that perspective,” he says with unfettered glee.

The decision to build Lumsden’s Wonka-esque Lighthouse was driven to a certain extent by necessity, he tells me. 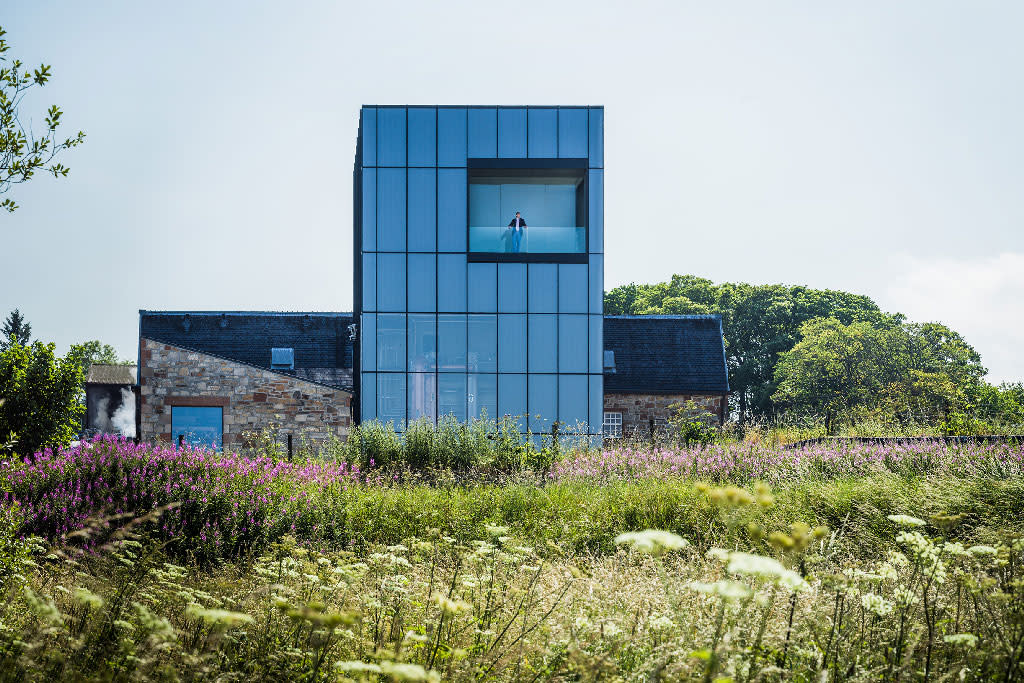 “The Ardbeg and particularly Glenmorangie distilleries have been running absolutely flat-out for the last 12-15 years,” he says. “For me to interrupt the production cycle to get access to the distillery for three to four weeks of a year, where I wanted to try some radically different things was proving increasingly difficult. And also some of the things I wanted to do, I just simply hadn’t been able to do that with the existing distillery plant.

“So the Lighthouse has been established to allow me to experiment but while maintaining the volumes that are required for future bottlings and also to try things that I simply can’t do in the main distillery.”

These things range from the smallest alteration in primary production to radical innovations, and everything in between.

“Some of the time it can be a very, very simple change,” Lumsden tells me. “It can be something as simple as offering one of your expressions in a natural, cask-strength form, for example, and other times it can be something dramatically different, where you’re actually using completely new materials. I am continuing to experiment with just about anything you can think of.”

For the past 10 years, this experimentation has largely focused on different aspects of production.

“We’re about to see some products coming out for both the Glenmorangie and the Ardbeg brand where I’ve been playing around more with primary production – it’s been great fun,” he teases.

The challenge with this approach, he says, is two-fold. “You’ve got a very long lead time until your product comes to market,” he explains. “Sometimes you’re talking 10 years’ maturation.” At the very least. If you’re experimenting with barley varieties, or looking at fermentation profiles, you have an even lengthier wait.

Secondly, by the very nature of these experiments, the difference between spirits is most emphasised in the new-make.

“For example, using the barley varieties, it’s not giving you black and white differences,” Lumsden explains. “It’s more shades of grey, and you really pick that up in the new spirit.

“But after many years of maturation, you risk losing these differences. So you have to choose your cask type accordingly to try and make sure that you still have the point of difference coming through.”

Lumsden says Glenmorangie is launching a product in 2022 that is an experiment he’s always wanted to carry out.

“I did this many, many years ago. I can’t say any more about it at this stage, but I will probably bottle this [whisky] slightly younger than my original target, which was 12 years, because I don’t want to continue to minimise the difference in character, if that makes sense?”

In addition to maintaining the two distillery’s very distinct characteristics, and inventing all manner of whiskies, Lumsden sits on a number of prestigious judging panels. In this capacity, he tastes hundreds upon hundreds of whiskies and sees first-hand the changes in the industry and trends that are being adopted – good and bad.

He says there has been a “real divergence” in recent years. “Some of the whiskies I taste have become much more characterful and I’m delighted to see whiskies that are non-chill filtered,” he says hopefully. 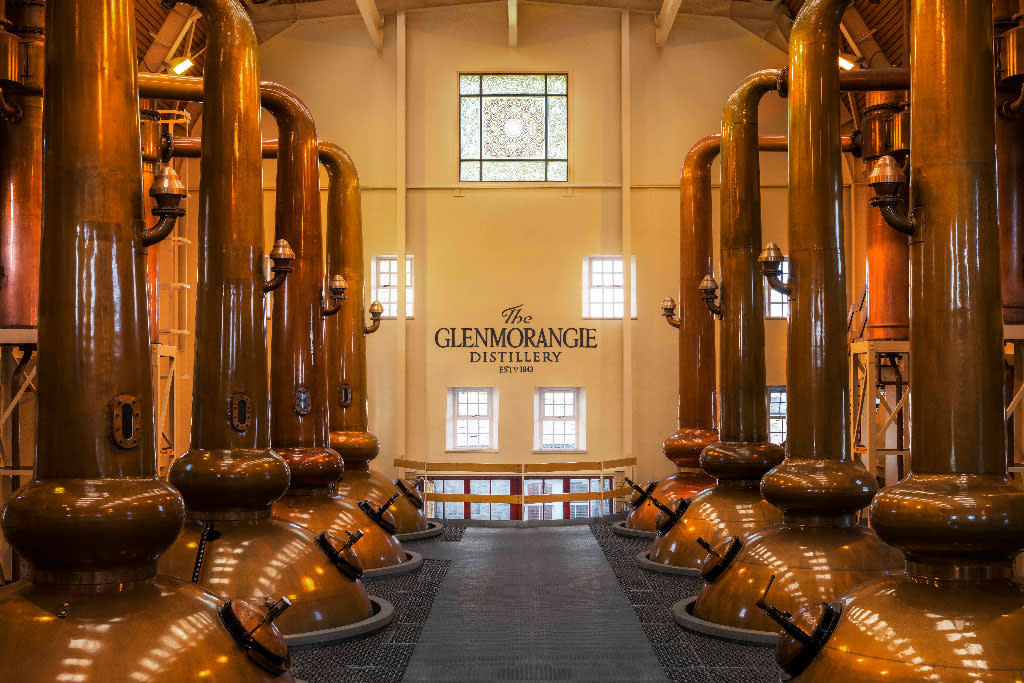 On the controversial subject of chill filtration, the process whereby distillers remove esters and fatty acids to prevent the liquid clouding at low temperatures, Lumsden ardently believes less is more. He does, however, acknowledge its place in markets where drinkers might not understand that cloudiness is caused by oils coming out of suspension rather than a fault. But, he believes, producers are taking its use to the extreme. If Ardbeg and Glenmorangie whiskies are chill-filtered, it is only ever done so “very gently”, because Lumsden feels that lipids – fatty acids from the base barley that would otherwise be removed by full chill filtration – add texture and character to the spirit.

Sadly, he rues, this is not true for others who are “very brutally” applying this technique to hasten up processes, and character is lost as a consequence. Corner-cutting exercises like this, speeding up distillation methods and reusing barrels too many times are becoming all too common, he says.

When it comes to producing or judging a perfect whisky, Lumsden says he’s after complex harmony. “I’m looking for the flavours to be nicely integrated together and not having any one aspect dominate,” he says. “That’s what I think good quality whisky, particularly Scotch whisky, should be".

“The final thing I’ll look for is the length and character of the aftertaste of the whisky,” he explains. “Because I really don’t like to see a whisky just completely fade – it shouldn’t do that. It’s a richly flavoured product and it should linger on the palate for a while.”

Whether he’s sitting on a judging panel or looking out from his monstrously tall Roald Dahl-esque Lighthouse, Lumsden’s vantage point, you sense, will always be forward-facing and progressive. It is for others to catch up or catch onto the trend. 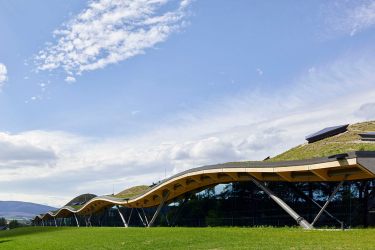 Everything you need to know about The Macallan