A Whistle-Stop Tour of WhistlePig

There has never been a more exciting time in the world of whisky. With the explosion in global demand over the last 5-10 years, the craft distillery scene is booming and with it comes experimentation and innovation. This experimentation has led to what is billed as the "Rye revival". Sales are booming in the US where many believe Rye is regaining its rightful place which was lost to Prohibition. In Scotland, iconic Scotch whisky distilleries (including Bruichladdich and Aribikie) are reversing history and choosing once again to use this difficult grain commercially because of the unique character it displays.  This revival brings a Spirits Buyer like me to places you might not expect. In this case, to a former dairy farm in Vermont USA, the home of the most awarded Rye whiskey maker in the world.

The story and achievements of WhistlePig are remarkable. Founded in 2008 by entrepreneur Raj Bhakta, he has quickly realised his goal of creating some of the world’s best whiskies. Key to this was hiring former Maker's Mark Master Distiller, Dave Pickerell. A man considered the Founding Father of craft distilling, this industry legend helped Makers Mark sales grow from 175,000 to 1 million cases over his 14 year tenure. He sadly passed away late last year but leaves a legacy of knowledge, innovation and experimentation that has already earned WhistlePig some of the industry’s highest honours. Their flagship limited edition expression Boss Hog IV: The Black Prince took the title of Best in Show and Best Rye Whiskey at the 2017 San Francisco World Spirits Competition. Their 10 Year Old was awarded 96 points by Wine Enthusiast, and their 15 Year Old (arguably their most in demand expression) garnered 97 points and a Best of Year 2016 award. 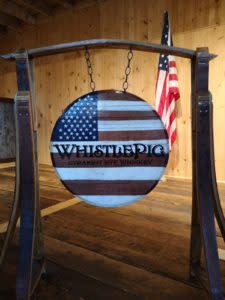 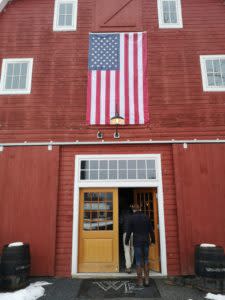 F+R were fortunate enough to have Dave Pickerell visit our office in London last year to discuss a single cask WhistlePig exclusive. It was immediately clear that the entrepreneurial craft distillery had given him a level of experimentation that a man of his knowledge could work wonders with. In addition to being a world authority on wood maturation, he brought with him to WhistlePig access to aged barrels of Rye whiskey he considered exceptional and unique; barrels of whiskey he had long had access to, but which did not suit a large brand where consistency is key. WhistlePig are the beneficiary of these and the barrels have been brought to Vermont to be finished in a variety of casks including Port, Sauternes, Madeira, Calvados and Vermont Oak. These are in addition to the whiskey current being made entirely on the farm - referred to as WhistlePig's Triple Terroir™ vision – with whiskey distilled from their grain, proofed with their water and aged in their custom Vermont White Oak. To fully understand what is being created there and how this small distillery has so quickly shot to fame, we were invited to Vermont to select a cask... 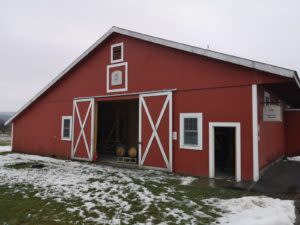 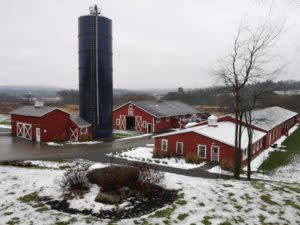 On landing to a snow covered landscape in Burlington, Vermont, the scene was set. I had been told winter temperatures dip to -20° which immediately set the location apart from many US Rye whiskey producers in Kentucky, and indeed those in Scotland. The first day was an introduction to all things Vermont. Skiing was thankfully off the agenda despite one FINE+RARE representative, Senior Account Manager Simon Brass, having a previous life as a professional snowboarder. Instead a marathon craft beer tour began with a 2.5 hour drive to a place billed as producing the best beer in the world - Hill Farmstead. In the UK a 2.5 hour drive for a pint would be deemed madness, however it delivered on its billing and hype. Our drive was considered short compared to those who came from Canada. Controversially we were also treated to some of the best Comté and Manchego cheese I have ever tasted (no AOC or PDO protection here), all locally produced. Vermont is renowned for organic and local produce; suddenly a world-class whiskey distillery on an old dairy farm made sense in this vibrant foodie mecca. 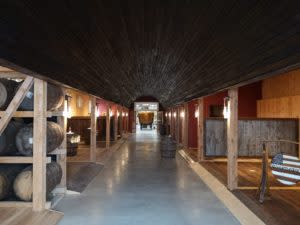 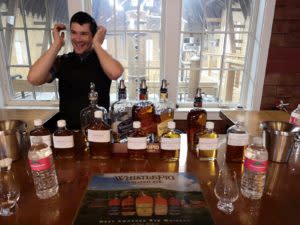 The second day officially began with a distillery tour and tasting. Unofficially it started with a WhistlePig Farmstock 002 Old Fashioned and a walk around the 500 acre estate. An estate which includes 20 acres of maple trees, just one of the features that makes this the perfect place to experiment with the highest quality ingredients for whiskey making. The innovation they are proudest of is their Vermont White Oak barrels from trees harvested directly from the farm and surrounding area. Vermont is about as North as oak trees can grow and the shorter growing season leads to oak trees with more growth rings. Each growth ring in a barrel imparts flavour, so Vermont Oak barrels - with custom chars & toasts designed by Dave Pickerell - bring tremendous depth and complexity to their Ryes. 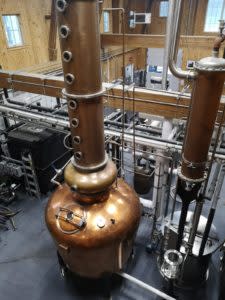 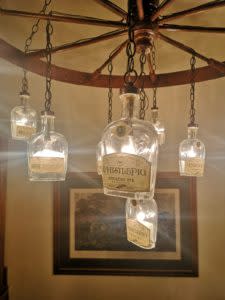 Inside an 150 year old renovated dairy barn is the WhistlePig Still House and Tasting Room. A gleaming copper pot still designed by Dave Pickerell takes centre stage. Here we tasted a variety of experimental finishes, including Chablis, Peruvian Rum and Pineau des Charentes. Some were revelations and others likely to never proceed further than the experimental stage. Either way, it was clear the lengths they had gone to in attempting to discover new flavour combinations. We finished this tasting with two treats from the distillery range: the highly decorated 15 Year Old and the latest edition of their flagship limited release The Boss Hog V: The Spirit of Mauve. The 15 Year Old was a stunning balance of fruit, spice and oak that only an award-winning whiskey can display. The Boss Hog V, immediately reminds you of the Calvados barrels this 13 Year Old was finished in. A huge whiskey in every way and one which prompted Dave Pickerell to say: “it is my belief that Boss Hog V: The Spirit of Mauve is better even than Boss Hog IV: The Black Prince”. It was The Black Prince which won World’s Best Whiskey. 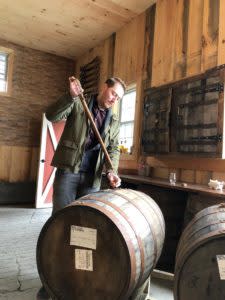 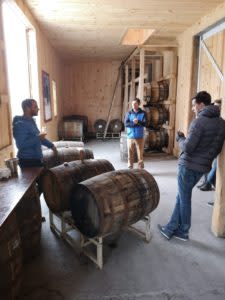 On the final morning it was down to business. After some discussion around what we were searching for from a single cask, a selection of barrels were pulled from the racking of the warehouse to sample directly. The remit was a world-first and something truly exceptional. Of the distillery releases, a 15 Year Old is the oldest whiskey bottled. It is also one of the highest-scoring and most talked about expressions, with a 2016 Financial Times article stating "buy it as an investment if you must (it will, undoubtedly, show a good return) - but this is really a whiskey that should be opened and enjoyed without second thought". A 15 Year Old has never been seen as a single cask expression however, so I immediately requested something the distillery has not allowed before: an F+R exclusive single cask of their oldest whiskey - 15 Year Old Rye. The distillery 15 Year Old is a combination of numerous casks blended together so this presented an opportunity to find something I considered of comparable or higher quality, yet uniquely different; something out of the ordinary and special. 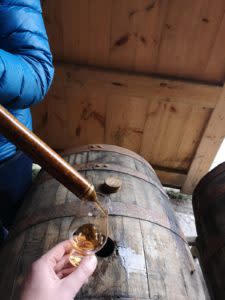 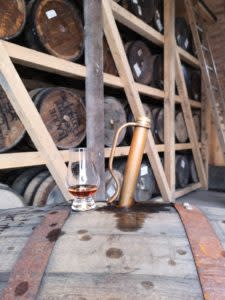 On tasting the fourth cask, I knew it was the one. The length of flavour immediately stood out, as did the flavour profile. There was a tropical fruitiness entwined with soft caramel and oak aged notes – absolutely stunning. Once a second tasting of each cask was complete (we had to try to eke out this extraordinary tasting!), we compared notes.  The tasting had been organised by the incredibly hospitable Daniel Khan, Senior Steward of the Brand, Southwest and International Markets and a man who knows WhistlePig better than most, having been with them from the very start. We unanimously agreed this was the clear winner and that we had both been blown away. Tt was one of the most exceptional casks he has tasted and unlike any other he has sampled before. 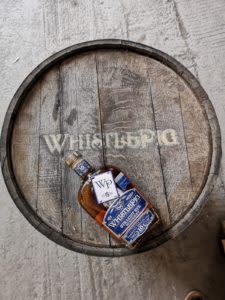 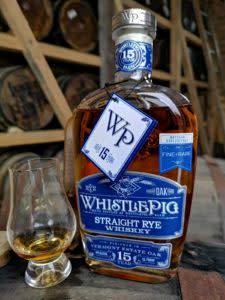 What has been achieved at WhistlePig in such short space of time is astounding. Witnessing first-hand the rich natural resources at their disposal, the facilities they have in which to distil, experiment and mature whiskey, and most importantly the opportunity to meet the innovative, world-renowned experts behind the brand, makes their remarkable achievements easier to comprehend. Something I find particularly exciting is watching as the New World whisky producing countries and regions expand, challenge and in exceptional cases outperform the Old. The opportunity to work with the world's most awarded Rye whiskey maker and bottle some of their oldest liquid is exceptional and something we are looking for to sharing you.