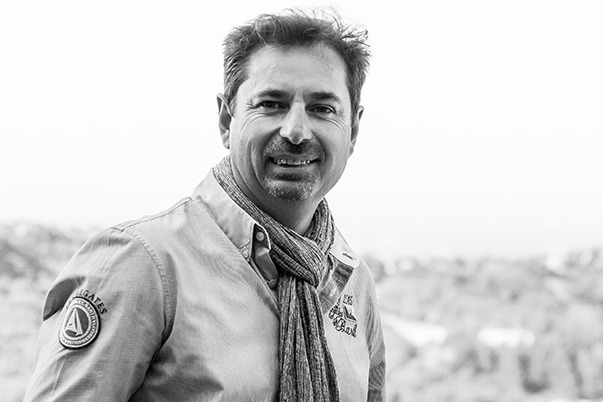 Based in the Southern Rhône for the last 25 years, Xavier has amassed a huge following from critics and consumers alike, with his wines often scoring in the high nineties, yet remaining extraordinary value. We caught up with him to find out the secrets to his success

Xavier Vignon could best be described as a maverick winemaker whose inquisitive mind and extraordinary experiments have taken him on journeys all around the world, working on some of the must cutting edge developments in today’s burgeoning wine scene. Initiated into oenology from a scientific background he has always had the benefit of operating free from the shackles of tradition yet now in his 40th year as a winemaker, his wealth of experience has seen him integrate his science with sensibility, developing an appreciation of producing wine in its most natural form.

We spoke to an initially noticeably weary Xavier Vignon, who is still recovering from a fairly serious bout of COVID-19. However, as soon as he starts to talk about his current projects he becomes distinctly more animated as he begins to describe all the fascinating projects he is currently working on.

This is a vigneron who clearly cannot stay still for long and has a huge drive and enthusiasm for his work. In fact, in his early days as a vigneron he was on the move all over the world working in Australia, South Africa, New Zealand, California for half of the year whilst returning to his native France to work through the harvest in the northern hemisphere. He carried out 40 harvests in 20 years. His winemaking career started in Champagne before exploring the other wine regions of France, working in Alsace and Bordeaux among others. Coming from a family of stonemasons whose philosophy was to travel when young, he was encouraged to explore the world before settling down. These travels and the variety of experiences working in oenology from one country and climate to the next are surely a vital part of the puzzle for Xavier’s success as a winemaker.

It was the Rhône Valley that finally stopped him in his tracks. Admitting he had never really been interested in the wines of the Southern Rhône, hence the reason he arrived there later in his career, only to find that it had everything he was looking for. A huge variety of terroirs, varying altitudes, an array of grape varieties. This meant lots of freedom in blending (reminding him of his work in Champagne) lots of work on tannins (harking back to Bordeaux) and working in warmer climates of the new world. He was well prepped to take on the region, setting up his own laboratory and consultancy practice initially advising for 20 – 25 winemakers before it expanded to over 500 in the region. 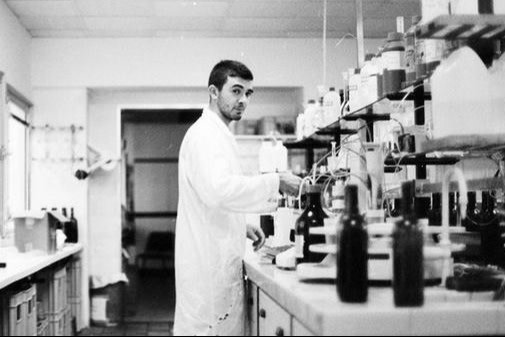 Xavier’s technical skills certainly helped many traditional vignerons to develop their wine for global export but it also gave Xavier a tremendous opportunity to explore the multitude of wines throughout the region. Xavier became fascinated with things that were clearly evident in tasting so many wines of the region, which his scientific background couldn’t always explain. “Minerality” for example, is a term bandied around wine circles everywhere you go. We all know it exists but science cannot tell us what it is. It is not clear that we even all think it is the same thing, Xavier claims. He was part of an extensive global research paper exploring what consumers and wine professionals identify as “minerality”. The study interviewed 5000 consumers and 5000 professionals resulting in no clear evidence that people were talking about the same thing. The only clear answer was that Chablis had minerality! Half the study thought more about smell, 50% thought about flavour. There is no definition still states Xavier. But this began his fascination with water and for him the key to understanding the secrets of minerality – despite him knowingly accepting he had no scientific data to prove it. This was his first step towards trusting his sensibilities over scientific analysis.

For him you need to look to water to understand minerality. 85% of wine is water, water is a huge proportion of what we taste, he states. Xavier looks to mineral water companies, even beer and whisky companies who have invested much more analysis on the affects of water, than the wine industry, largely because they have more money to do so, but also because water plays a much bigger role in their taste profile (in beer water is 90-95% water compared to wine which technically is 100% grape juice). In their analysis of mineral salt, bottled mineral waters from different parts of the world have distinctly different levels of each mineral affecting the flavour of the water. Beer companies have also accepted that their beers made in different factories around the world taste different depending on where they are made because of the composition of the water. Whisky famously is obsessed by the quality of its water in regard to the final flavour profile of each distillery. "So why not wine too?", asks Xavier. In different parts of the Rhône he identifies how high levels of silica in a wine makes the wine taste more acidic. How different chloride minerals provide a flavour of salinity in the wine, magnesium creates bitterness and so on. Scientific analysis doesn’t register the difference, but the difference is extraordinarily apparent when tasting. 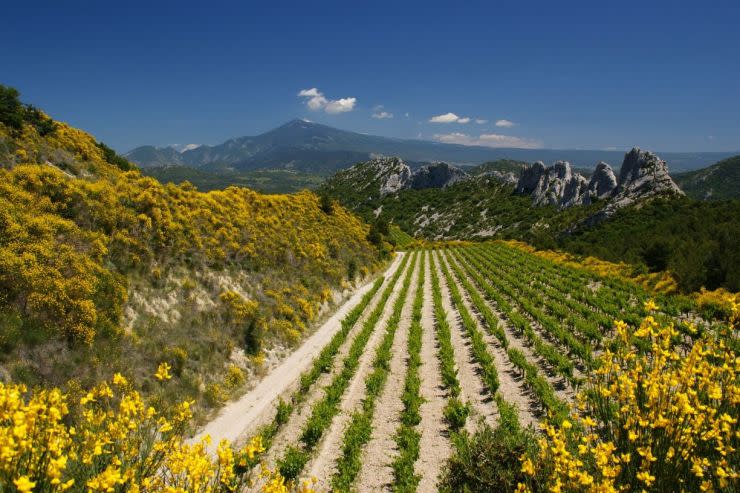 The vineyards of Gigondas

The effect of water is intrinsic, Xavier believes, to the strong mineral flavours of the Southern Rhône. The wines of the region could never taste like they do elsewhere because of the effect of the mistral. The mistral wind in places (particularly Châteauneuf-du-Pape) is so strong that it evaporates water from the berries, heightening the concentrations of mineral salts the grapes have absorbed in the water from the ground whilst the water evaporates from the berries. Xavier believes Gigondas, where the vines tend to be more protected from the mistral due to the protection of the hills, is less mineral for that reason.

Xavier’s fascination with the effects of water on wine was a big reason why he began his Arcane series, a set of one-off wines that are produced with minimal manipulation. He looks back at some regions he has worked in, stating parts of California and Australia require one to one and a half tonnes of irrigated water just to produce one bottle of wine. This is crazy! Whilst we have the science and technology for this to work, it doesn’t make sense.

The Arcane Series of Wines by Xavier

The first wine made from the Arcane series was called “Le Diable” – translates as “the devil”. It came about when one of the vignerons he was advising took him to a high altitude Mourvèdre vineyard. The winemaker now in his eighties had struggled his whole life to get the Mourvèdre this high up to ripen, never achieving the results to use in his final wine. Xavier convinced the vigneron not to harvest the grapes with the rest of his crop, to leave the grapes on the vine and to see what happens. It was 2015, a very late harvest already Xavier recalls but this extended Indian summer caused something in the vineyard they couldn’t believe. As the grapes continued to ripen and sugars increase, the acidity also started to go up as well! They had never seen anything like it. Xavier convinced the grower to sell him the grapes and produced the wine made just from these grapes. Xavier took the wine back to the elderly grower, who on tasting the wine began to cry. In his lifetime he had never been able to produce a wine from the vineyard, particularly not a 100% Mourvèdre! Xavier named it Le Diable, the nickname of the Mourvèdre in the Southern Rhône because it was so difficult to ripen. Xavier knew that what happened in 2015 was unlikely to be repeated. This was a wine that made itself. It was vines in the perfect place at the perfect time and this is what he wanted the Arcane series to represent. Ever since, the Arcane series (now in its 6th and 7th cuvee to be released in the next few weeks) are complete one offs never to be repeated. 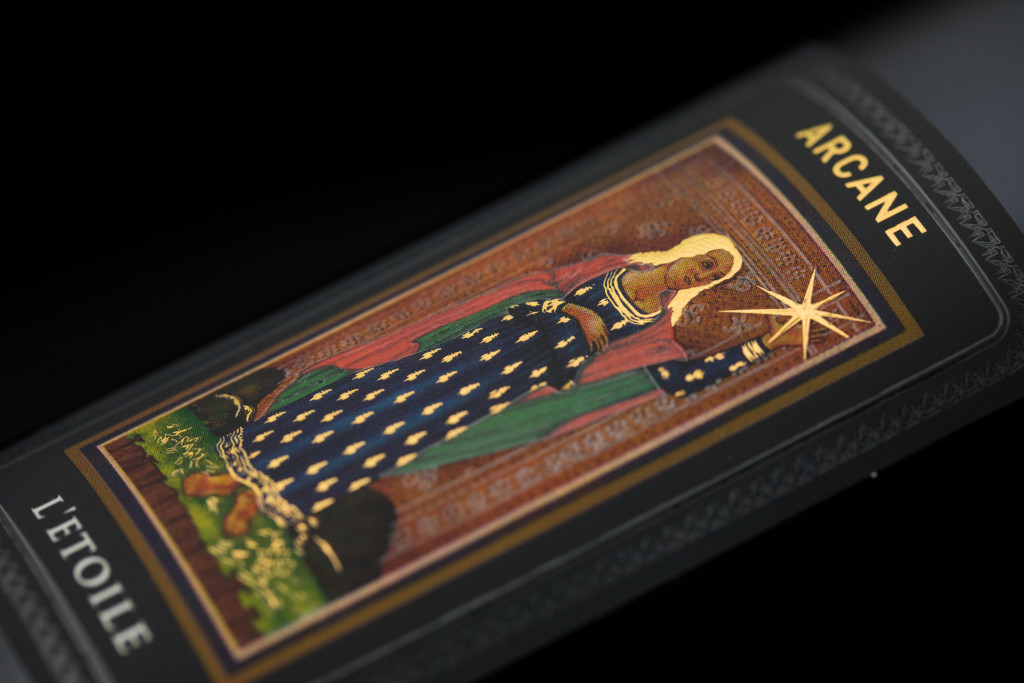 The story behind the Arcane series informed Xavier’s winemaking philosophy ever since. Whilst he believes we can use science and technology to manipulate wines, he wanted to move away from this, preferring nature to tell him where and when he should make the wine.

That hasn’t stopped him experimenting however and there are plenty of other cuvées that show off Xavier’s inquisitive scientific brain operating at full speed. He is currently working with a winery in Turkey who want to produce a wine free of any manipulation. Not only organically and biodynamically grown, natural yeasts etc but they even want the fermentation and maturation vessel to have no impact on the wine – he came up with the “vinarium” – a dark glass tank for fermentation and maturation – a natural product that does not infuse any flavour in the wine. His next experiment is to get rid of closures altogether by extending the neck of the bottle and melting the glass at the top to seal the wine without any other material such as cork to affect the flavour. He eventually wants to create individual wines from individual vines!

He is experimenting with ageing wines both in the ocean and with his own invention of submerging a tank of wine within another bigger tank of wine. He does this with his Châteauneuf-du-Pape Cuvée Ange, comparing the process to a baby in a womb, completely protected from the outside world. He believes you can age wine like this for 50 years without any need for sulphides or racking because there is 100% humidity and an even atmospheric pressure on the wine all the time. It’s an expensive operation and for the moment not possible for all his wines. But the level of experimentation and inquisitiveness gives you a good impression the sort of lengths Xavier will go to to push the boundaries of modern winemaking.

He has no problem blending a Châteauneuf-du-Pape with a Côtes du Rhône village cuvee to make it a better wine only for it to be downgraded to a Vin de France because a Châteauneuf-du-Pape cannot be included in a blend and be titled Côtes du Rhône Villages. His interest lies in how it tastes, accentuating the multifaceted variety and complexity that exists in the Southern Rhône, rather than the traditional restraints of the appellation system. This is a maverick whose wines today are some of the most exciting in the Southern Rhône.

Browse all wines by Xavier Vignon