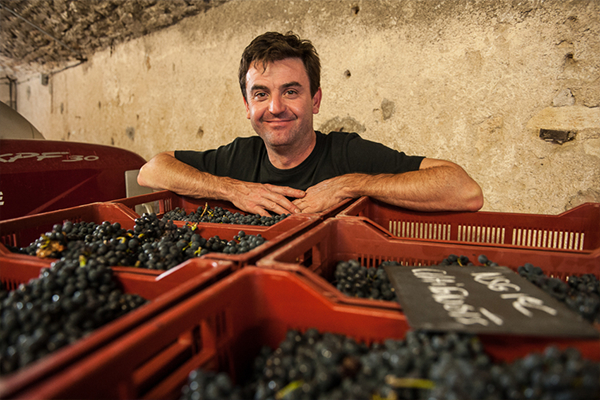 “2018 is the best vintage I have ever made… What I love about the 2018s is the shock every time I taste it… It is a vintage I have been dreaming about for many years”.

Nicolas grew up in Burgundy, learning his skills as a vigneron under the guidance of his father, the highly respected Gerard Potel at Domaine Pousse d’Or. He also worked with Jean Marie and Christophe Roumier at Domaine Georges Roumier. As a young adult he travelled further afield working in wine regions outside of Burgundy including Moss Wood and Mount Mary in Australia and Tom Dehlinger, a pioneer in Sonoma, California. This enabled him to reflect on Burgundy from outside the bubble, giving Nicolas a global outlook on the region's place in the world of fine wine.

For someone who has such an in-depth knowledge of the last 50 – 60 vintages, it was quite a surprise to hear Nicolas say that he had never seen anything like the 2018 vintage. For him, 2018 is the best vintage he has made since he took charge at Domaine Pousse d’Or in 1997. His eyes light up – “What I love about the 2018s is the shock every time I taste it. At every tasting the wine's evolution is better, this is really not common, this is not something I have tasted before… It is a vintage I have been dreaming about for many years”.

“It’s a great white wine vintage… the whites have this super energy, they are amazing.”

Whilst the red wines have stolen the initial limelight, Nicolas is convinced of the potential of the white wines in 2018 too – “It’s a great white wine vintage, not necessarily for long ageing but the whites have this super energy. Completely different to 2014 and 2017 (the most recent two great vintages for whites), they are in the class of 2010. There is richness and power but there is also discretion and appeal, even now at this young age. Whilst 2018 was a warm vintage Nicolas believes the whites are nothing like the 2009 and 2015 whites, as the 2018s are in no way heavy.

One vintage the reds are compared to, for the few who have the memory of and access to taste any, is the 1947. Nicolas, on hearing this comparison, went and tasted a number of 1947 bottles to try and find the link, but for him, whilst the pH levels, weather conditions and picking dates are all the same, the profile is not comparable to the 1947 vintage.

For the reds, 1990 could be a comparison, another warm vintage in Europe. However for Nicolas, the 1990s all tasted of the vintage as opposed to the varying terroirs up and down the Cote d’Or. But this may also have something to do with higher cropping levels in 1990 compared to today, where top producers are being much stricter with their yields. For Nicolas you cannot go over 50 hectolitres per hectare and still get terroir definition. Where yields are sensible, there is real terroir definition in 2018, despite the ripeness levels.

What Nicolas means by convenient is low disease pressure, fantastic flowering and fruit-set conditions and a balanced proportion of rain, sun and no hail or frost.

Whilst the vintage was warm, Nicolas does not call it a “blue sky vintage” like 2015. In 2015 there was not a cloud in the sky the whole summer. In 2018 there was sunshine, but there was cloud and there was rain too. It was a real balance of weather and absolutely no mildew pressure which meant copper applications were low. There was also never the high heat that was present in 2003 (a vintage some have compared with 2018).

Despite the sanitary conditions of the growing season there was still a lot of work in the vineyard for Nicolas’ team – lots of tying of vines. Nicolas now works entirely by hand, opting not to mechanically trim the canopy which means a lot more hours in the vineyard, managing the canopy right up to harvest. The harvest conditions were perfect. Nicolas remains the only picker he knows of who only picks in the morning. By 1pm they stop picking.

This led to an interesting point. The biggest change caused by climate change in the Cote d’Or according to Nicolas is the shortening of the picking window up and down the region. In the past there was a 3 – 4 week picking window in the Cote d’Or, you would start with the warmer sites, then wait for the cooler sites to ripen. These days there is perhaps just a 6 – 10 day picking window for the whole region and logistically this causes difficulties in bringing all the grapes in under optimum conditions. It takes some growers ten days just to pick one village! Nicolas’ response to this was to hire a staggering 120 people to pick 22 hectares all in six days - that is six half days!

2018 Elevage – A light touch was necessary

Once the grapes were in, it was clear to Nicolas that there was no need to over-macerate in order to build the layers in the wine through the élevage period. He did virtually no pressing or plunging and what little he did was very light. For Nicolas all that was needed were buckets to wet the cap of each tank, protecting the aromatics of this decadent vintage as the wine gained in precision in tank and barrel. Nicolas (like many other producers we have spoken to) felt it was not interesting to keep the wines in barrel as long as is typical in cooler vintages. He states “in order to capture the purity and essence of the vintage, a shorter élevage was preferred. Élevage in barrel can often bring power, but with 2018 the power was already naturally there and if over-oaked there was a danger the wines would become too heavy". Nicolas did not want to lose the energy and fruit precision that is so prevalent in the 2018 vintage. 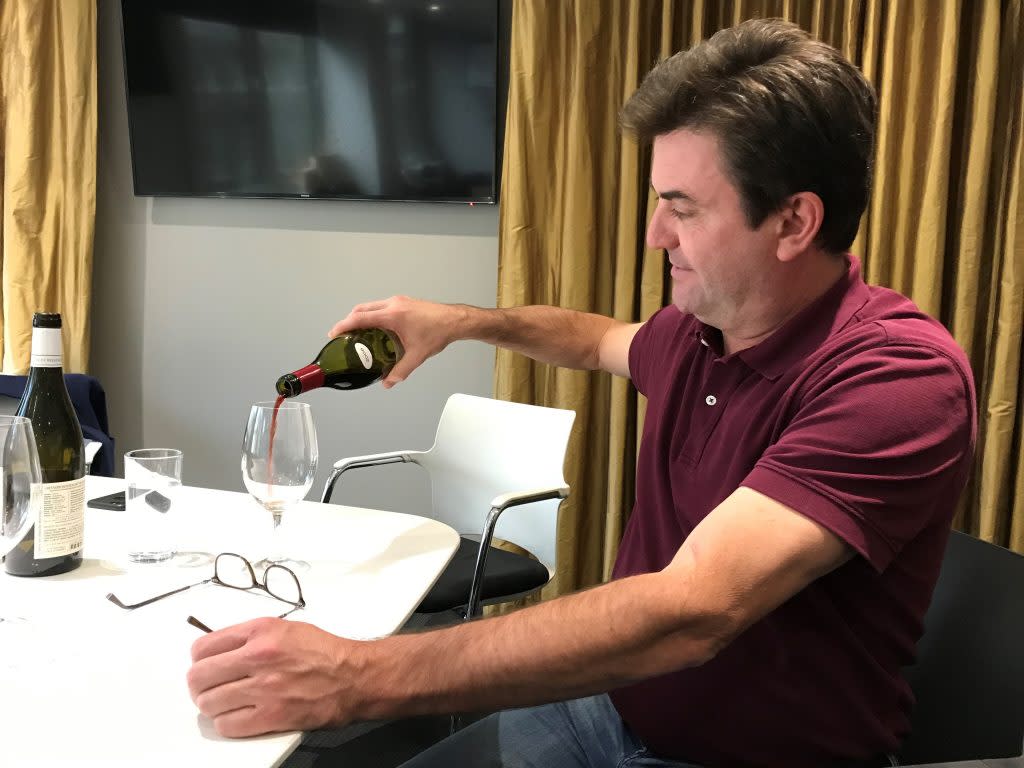 A review of some back vintages in bottle

A meeting with Nicolas always means a review of some back vintages and this time we were blessed with some absolutely incredible bottles. The highlight would have to be the 1978 Volnay 1er Cru Santenots, which was as fresh as a daisy, completely integrated and incredibly complex. But there were many highlights.

Charmes Chambertin Grand Cru 2012, Roche de Bellene - Nicolas believes the 2012 vintage is very much like the 2010. A high level of purity, very elegant but more definition than power. The vintage is bright and open but does not have the concentration of 2015 or 2009. Great acidity and a lot of freshness which leans to the 2002 vintage but doesn’t have the power of 2002.

At the moment, the aromas are fairly tight and restrained. The colour is a deep, dark ruby with black cherry and blackberry fruit, cherry liqueur, light camphor, clove spice and some savoury earthiness with a nice piquant bite to the tannins. Very “Charmes” in its round, silky texture with a deceptive power at the centre of the palate.

Chambertin Grand Cru 2010 – Roche de Bellene - The 2010 vintage has the power of 2009 but a much cooler fruit profile akin to 2012. For Nicolas he feels the 2010 was a largely forgotten vintage on release but has now evolved in bottle to become a modern classic.

What is clear with the Chambertin is its ageing potential. Despite being two years older than the Charmes, the acidity levels are significantly higher and the wine is incredibly fresh. It remains very youthful in the glass. There is a lovely sappiness, a touch of pleasant greenness to the wine allied with noble raspberry and strawberry fruit. There is brightness and lift with an underlying, deceptive power that grows on the palate. A high concentration of very fine tannins that are both structural and beautifully integrated. There is more intensity and verticality on the palate than the Charmes '12 and a lovely crushed rock minerality on the finish. This wine is set to develop beautifully over the next 15 years.

Volnay 1er Clos des Chenes 2008 – Roche de Bellene – According to Nicolas, 2008 was a vintage that certainly split the critics. The older generation of critics loved this cold vintage producing very dry wines with high acidity from grapes that were picked late into October. Younger critics on tasting the vintage were more critical and less experienced in tasting this type of vintage young. Nicolas however believes the vintage shares similar traits to the celebrated 1978.

The wine is already very developed on the nose dominated by tertiary aromas of old leather, beef stock, mushroom and truffle and dried cherry. The wine has a skinny structure with a vibrant acidity and the tannins still remain fairly austere. It feels more Pommard-like in tannin structure. A bit angular at this point.

Volnay 1978 1er Cru Santenots – Roche de Bellene - A very similar vintage to 2008 with a late picking in October. If the 2008 turns into anything like this then there is plenty to look forward to. 1978 remains a “classic austere” cold vintage but ageing in bottle has brought an amazing sweetness to the wine and the tannins have become like silk.

Brick coloured with fully tertiary aromas, roasted mushroom and french onion soup yet the aromas are very clean and uplifting. The breadth on the palate is impressive, almost elliptical and creamy on the palate, tannins and acidity completely integrated with lots of extract and a tremendous flavour complexity of herbs, spices, dried cherry and fig. The wine has exceptional balance. It is perfect aged Burgundy. 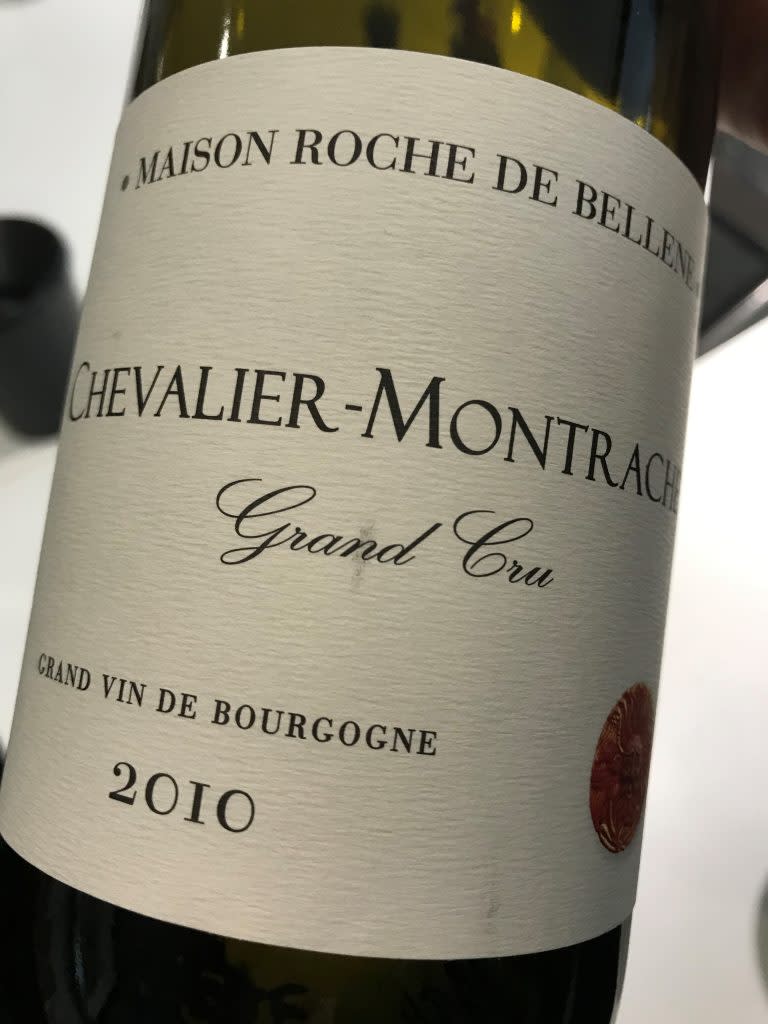 Chevalier Montrachet Grand Cru 2010 – Roche de Bellene - Chevalier Montrachet according to Nicolas is the most terroir-defined site for White Burgundy. More so than Le Montrachet because the terroir is more consistent from across the site. Le Montrachet in comparison produces very different wines depending on where the grapes on the site come from. Chevalier is all limestone dominant soils, providing an incredible opulence and mineral power.

This Chevalier has an incredibly complex nose starting with lime oil, fresh pear and mandarin fruits, even hints of lychee. Then comes the white flower notes, crystallised ginger spice followed by light toffee, caramel hints, it’s wonderful. The palate is incredibly opulent but not without poise and measure and a striking acidity that cuts through the middle. More flavours develop in the mouth, russet apple, roasted pineapple and praline notes all dance on the layered palate. Exceptional.