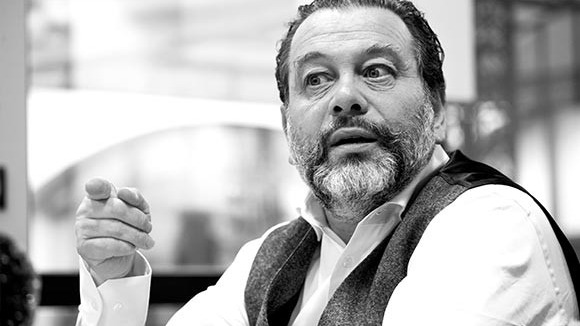 F+R: It seems that top winemakers at some point in their career had to take risks to achieve their goals in producing fine wines. Looking back over your career what were those big risks and what were your feelings at the time?

If agronomic work is properly done the raw material is stable. The illusion of believing that there first opportunities for quality exist at the wine making stage is the consequence of having technicians who have disconnected with the agronomy of winemaking. It means that they work for example on higher yields so with less dry extract, leading to wines that will be more fragile and therefore in need of an attendant to turn the grapes into wine who behave more like a scientist or curative doctor. But normally when we are working with a raw material of good quality of real concentration (without surrendering), winemaking goes quietly. The place of the winemaker if I allow myself to make an analogy is like the father who teaches a child to ride a bike: he is behind them, but he does not hold them. He is there just in case. The winemaker is there to accompany winemaking not to do interventionism.

Let's lay down first the basics when it comes to the quality of the wine, the quality is done in the vineyard at the agronomic level and not at the level of the vinification done by the winemaker.

It is the winegrower that agronomically creates a potential for quality and the winemaker turns this potential into reality. So, the winemaker can destroy the potential but cannot create it.

So the question deserves to be asked about the agronomic work, but nowadays, the fashion resulting from certain trends in wines of the new world is to make the winemaker a star; which has led to more and more mundane winemakers understanding very little about agronomy.

By being an operator in Australia for example, I have been confronted several times with winemakers who wanted to live in the city and who never want to go to the vineyards.

For example: in some New World countries, many oenologists think that working with indigenous yeasts is taking a risk, whereas for me it is an aberration. If we want to speak about terroir (As a reminder : the terroir is the soil, the climate and the human), if we want the soil part of the soil to express itself, we will have to work with the indigenous yeast that is on the grape. When you go for selected yeasts you will erase the terroir effect. In parts of the new world where we try to have a marketing photo that is signed by the winemaker, the winegrower does not matter. But when we work in the old Europe on wines of AOC terroir, the winemaker is no longer the one to make its signature all over the canvas, it is as discreet as possible at the bottom corner of the canvas.

F+R: What was the biggest learning curve in your career and why?

Michel Chapoutier: My biggest learning curve has been and continues to be the discovery of biodynamic and anthroposophic logics. At first we looked at these approaches as a little sectarian, almost as witchcraft. Then, in conventional science, among others in physics, there was the rise of quantum mechanics. And when we look at the principles of quantum mechanics, we will find rational or scientific explanations of some biodynamic principles.

When we say that energy is more important than matter because matter does not exist or is an illusion, it is a quantum foundation that gives an explanation to biodynamics, whereas for a long time, critics of biodynamics said it was an illusion or a superstition.

It's like when we talk about the emotion that the group self of the plant is able to feel, the emotion or the attention of the winegrower or the stakeholder on the plant, this demonstration has been scientifically proven by Mr. Cleve Backster who initially the creator of the lie detection machine who went on to carry out tests to see if the plants suffered pain. He saw that the plant at the very least reacted to the intention.

F+R: Who were your biggest influences in life in both your career and your outlook in general?

Michel Chapoutier: Rudolf Steiner and François Bouchet. They are people who have contributed to repositioning agronomic work in its true place. Rudolf Steiner is one of the greatest pioneers of the 20th century and François Bouchet was an agronomic adviser who helped us to work on the precepts of Rudolf Steiner which showed that the quality was agronomic and not oenological. In this systematic mode of wanting to overestimate the detail of the winemaker at the expense of the true creation of the agronomist, they put the church in the middle of the village.

F+R: What have been the biggest mistakes you have made?

Michel Chapoutier: We work in the world of AOC: it is the marketing of the offer. As opposed to the wines of the new world whose marketing demands “whatever its soil I will make the wine that my customer wants”. Like a painter who says "you want a yellow painting, I paint yellow."

We do not work for the taste of the customer, we make a picture of the terroir, we let salespeople and sommeliers become the interpreters of this photo.

An AOC is not there to be disguised, to please customers, it must remain in its integrity as a piece of art. The artist normally should create for an emotion in himself, it is a selfish act. So the mistakes I could make in my youth are the times when I wanted to go for wines more on the power because it was the fashion of the power while the soil did not allow it.

F+R: Do you believe fine wine can be made anywhere? That there is terroir of equal quality all over the world?

Michel Chapoutier: First I allow myself to correct the term "terroir" because I guess in your question you mean "soil". I recall the definition of the soil soil (geology, pedology) the climate (micro climate, vintage) and the human (tradition, talent of the actors of the present).

If we speak of terroir on the ground level, this is not going to be expressed, among other things, by soil microbiology. The trace elements and minerals will integrate the plant world through the action of microbiology. The bacterium will transmute the mineral into plant so if you want to speak soil we must speak of microbiological density.

A soil that is leached by the philosophy of the "ide" (herbicide, fungicide, insecticide) is a soil where you no longer have a life, so it is an above ground soil where microbiology is no longer able to transmute the mineral. The plant by its roots and the principle of osmosis will store the organic richness and the mineral wealth.

Another important point, if we talk about the pedagogical quality of the soil we see geological vines digest its soil century after century, and century after century it improves by its microbiological activity in this soil around the roots to make it more and more apt to help the vine to ripen its grapes. This means that the vineyards of old Europe are ten to twenty centuries ahead of the New World countries.

We make great wines in Australia but on soils that have no history. That is to say that these wines at the aromatic level are interesting but they will never have the complexity in the 500 years that come from the great wines of the historic vineyards.

F+R: How much collaboration is there in the Rhone Valley? Is there much sharing of knowledge amongst the winemakers?

F+R: What have been the finest vintages in your career and why?

F+R: How concerned are you about global warming in the Rhone and what are you doing to counter its effects?

Michel Chapoutier: We are still talking about the effects of global warming, let us keep in mind that in old Europe, if I take the example of Tain l'Hermitage or Bordeaux, we are at the same latitude of Montreal, it is only thanks to the Gulf Stream that we can make wine.

One of the consequences of global warming may be also the disappearance of the Gulf Stream, that is to say that the global warming could destroy our vineyard by the cold because that would mean that at home we would have -40 degree winters.

With the evolution of heat we will have to learn to work probably with irrigation, adapt our methods of cultivation, but finally in the agronomic research that we have done we have only just rediscovered agronomic knowledge that already existed in the Late Middle Ages on principles of working soils at certain times in line with the rhythms of nature.

Northern Rhone Valley: Syrah, go see Australia and California where we will find temperatures at 4/5 degrees higher than ours, therefore we are much less concerned than other regions.

It is the same for Grenache, go see the temperatures that we find in Spain, also we realize that we have differentials on grape varieties that we can work with. Other regions will be affected well before us.

F+R: How involved is the next generation of Chapoutier and what does the day to day operation consist of? How many people are now working on the Estates and who are the current central players?

Mathilde is in charge of sales management, Maxime works with the technical department and there must be 200 people in the house.