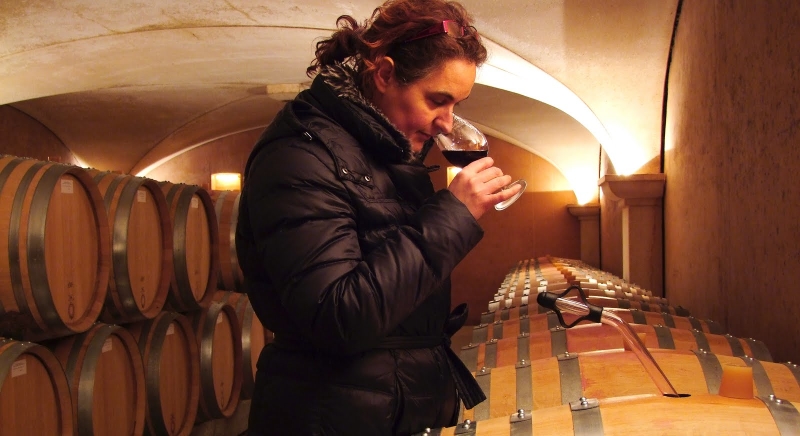 Click here to view the current selection of Domaine Anne Gros at FINE+RARE.

Now one of the most respected vignerons in the Côte de Nuits, the 2017 vintage marked Anne Gros' thirtieth year at the helm of the family estate. When Gros succeeded her father in 1988 the domaine covered three hectares. Since then it has grown to cover 6.5 hectares. But it has not been easy progress...

Despite her premiership over neighbouring winemakers, seven consecutive years of challenging weather conditions (including hail and frost damage) have taken their toll. Yet Gros' commitment to quality and her resilience in the face of climatic adversity remain her proudest achievements throughout this difficult time.

In 30 years there have been very few changes in her approach, but as her popularity and recognition grew she started investing more in the winery. She claims her most significant addition was a pneumatic press purchased in 1995. This enabled her to better control the quantity and type of lees used when ageing the wine. By only ageing the wines on very fine lees it meant she could age the wines for longer in oak adding mid-palate weight without the fear of the wine reducing and losing its fine perfumed aromatics. She continues to de-stem 100% of her fruit with the aim of retaining as much acidity as possible to maximise the ageing potential and it really shows in the recent tasting held in London revisiting some of the great vintages of the last 20 years.

Of the Clos Vougeot vintages the 2006 was the biggest surprise, exuding primary fruit characters of bright, crisp redcurrants and a more overt perfume than the ‘02 and ‘05. Good verve on the palate and a nice bitterness on the finish, suggesting the wine will further improve and soften out in the next couple of years. Generally in a very good place.

The 1996 was even greater in its expression. After initially being served a faulty bottle, it was thought the wine might have passed its best. But on a second attempt, it was really one of the wines of the evening - fantastic power, loads of energy and bags of fruit (redcurrant and raspberry). Additional refreshing wet soil characters provided a fine long finish.

The '08, whist still fully charged with a stiff backbone of acidity, was drinking very well right now with a more herbal, clay, stone-like minerality, as if partial whole bunch was used (though apparently not).

The 2005 rather unsurprisingly remained fairly guarded. Offering plenty of density and promise, yet no sign of coming out to play this side of the decade.

The Grand Cru Richebourgs were off the charts, reaching another level in terms of back palate broadness, three dimensional in structure on the palate, with that magic balance of oily glycerol texture on the tongue yet completely palate cleansing on the finish.

All the vintages were excellent but again the 2006 seems to be in a great place right now - slight hints of creamy toffee, red liquorice, sweet red berry fruit and truffle all singing in unison.

Similarly the '05 is full of promise, but requires at a guess at least another 5 years before approaching.

Finally the ‘99 lived up to expectation. A fully developed savoury nose, super-fine filigree tannins, bags of ripe forest fruit, and again that dense glycerol silk-laden texture. The wine ends with a peacock tail of a finish, brightening up the palate and giving the wine excellent length and depth.

These wines are difficult to find but the consistency in style and quality throughout the years shows a vigneron in her prime.