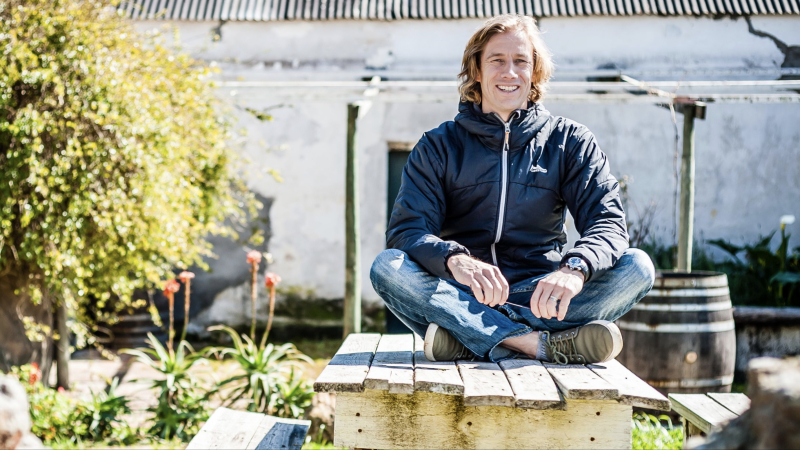 Keermont Estate‘s wines are made entirely from their own vineyards in the Helderberg and Stellenbosch mountains producing predominantly Syrah, Cabernet Sauvignon / Merlot red blends and premium Chenin Blanc.

Blankbottle in contrast source their grapes from remote vineyards all over the Cape, applying ad hoc creative winemaking approaches as necessity dictates. Blankbottle produces up to 47 different cuvees in any one year ranging from Cinsault to Semillon and everything in between.

Despite these different approaches both Pieter and Alex share an amazing attitude and infectious energy that unites this new generation of producers. Behind all the bravado they are in fact very committed to raising the reputation of fine wine in the Cape. Pieter and Alex also directly work together on one cuvee, as Pieter sources a special selection of grapes from the Keermont Estate for his own “Rabbitsfoot” cuvee.

The Keermont Vineyards in the Helderberg Mountain Range

Keermont Estate has had quality at the heart of its ethos from the very start. Even before the winery was built, Alex Starey was producing fantastic wines in buckets from this exceptionally positioned site sitting between 250 to 400 metres above sea level in a natural amphitheater in between the Helderburg and Stellenbosch mountain ranges. It is one of the most beautiful vineyards you are ever likely to come across, grown on pure granite soils and surrounded by mountain flora called fynbos which Alex believes itself plays a unique role in the wines complexity and character.

Their first commercial vintage was in 2007 made from vines that were just 2 years of age at the time. Just 5 barrels in total were made, a blend of Bordeaux varietals with every grape individually de-stemmed by hand. From the outset the wines locally received a very positive response and it gave the team the confidence to invest in building a winery in 2010.

Alex and his team continue to have a very hands-on approach monitoring every stage of the viticulture, vinifcation and bottling processes. Alex’s obsession to detail means he wont even trust a mobile bottler to bottle the wine, preferring to hand bottle every wine himself! He proudly states he can bottle a 2,200 litre tank in a morning. Today the total production amounts to 5000 cases and they produce 10 separate cuvees, including 4 single vineyard wines produced in tiny quantities. 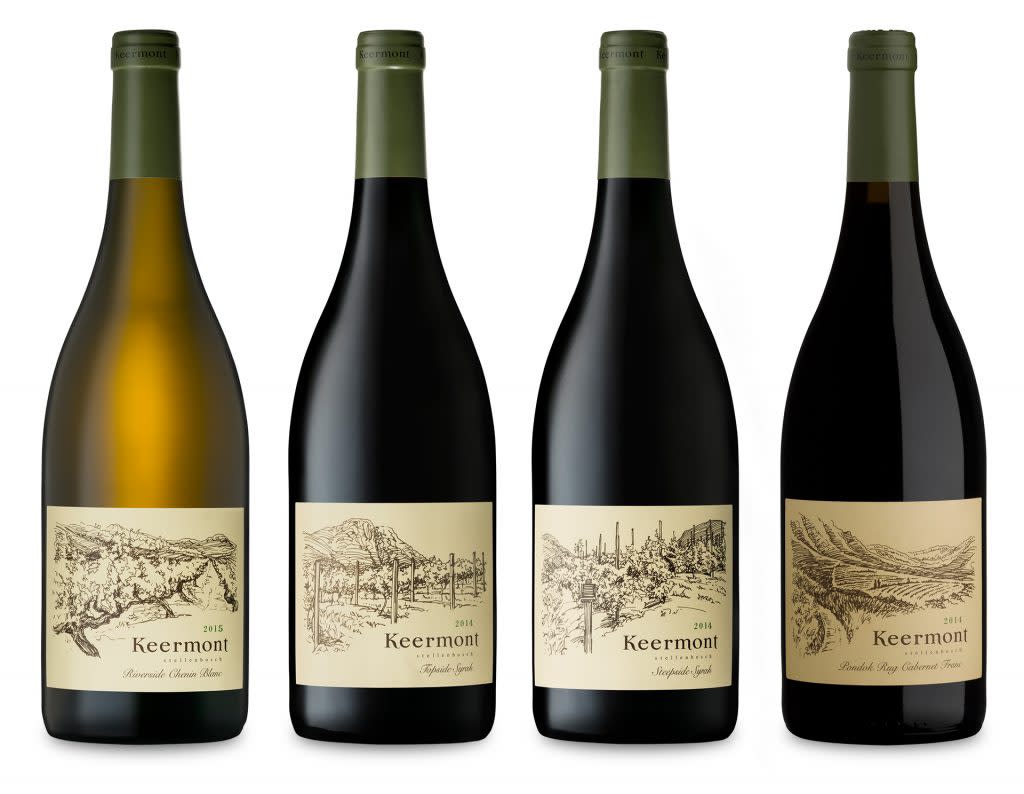 The Single Vineyard Sites are:

They also make Keermont Fleurfontein, a barrel fermented dessert wine made from vine-dried grapes. This is the same vineyard that provides the grapes for Blankbottle’s Rabbitfoot cuvee.

The white wines are vinified using only indigenous yeast, the wines are never acidified and the wines are bottled unfiltered. The wines are aged in a mix of one, two and three year old French oak barrels.

All grapes are picked in the morning, brought in cold to the winery. The reds then are given a cold soak and slowly brought up to fermentation temperature. The whole process takes place over a 4 week period. The reds are punched down just once a day and fermented in 6000 litre open top fermenters before being aged for 2 years in old French (500 litre) barrels that are racked just twice during this time.

Tasting these wines back to the 2012 vintage I have never tasted a wine from the Estate that is anything but outstanding. The finesse of the tannins is exceptional and you can really taste the effect of the altitude with the wines having a really refreshing acidity and tension on the palate. The fruit is incredibly pure with no rubber taint you often find in South African red wines. The oak maturation helps focus the fruit, providing wonderful breadth and length to the palate. We offered the single vineyard Steepside earlier in the year and we continue to plead the winery for more. In the meantime the Estate Red and single varietal Syrah are easily some of the best buys of the year. 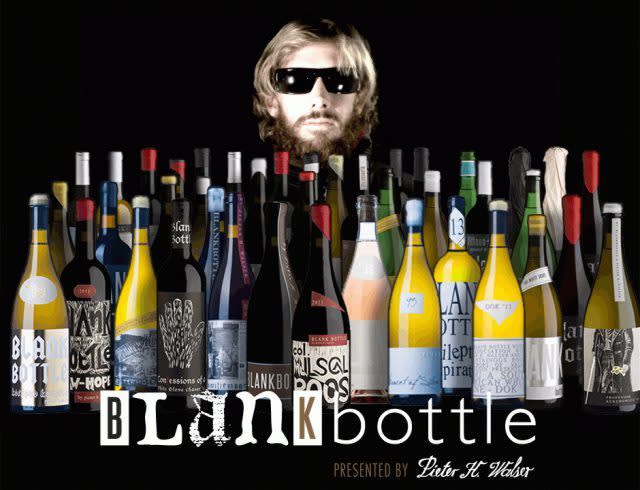 Blankbottle is in complete contrast to Keermont’s single site approach and currently sources from 60 different vineyards situated all over the Cape. Pieter Walser’s energy knows no bounds and he spends half the year sourcing grapes from vineyards he believes have exceptional qualities. The rest of the year – an incredible 100 days of it, he spends harvesting! There is some order to the madness starting with the hotter sites and earlier ripening varietals in Wellington in January before moving to Swartland in February and the colder regions of Darling and Elgin in March. He is vinifiying an incredible 47 different cuvees all in small 1 -1.5 tonnes fermenting tanks.

A typical cuvee amounts to just 3200 bottles which means although he is dealing with a lot of different wines, the tiny production levels of each means that every cuvee is hand crafted. There is a real honesty to Pieter’s approach, stating he has never used laboratory analysis to make his decisions in the vineyards and the winery, stating that if he had trusted analysis he would of picked at the wrong time, preferring to operate on instinct and experience.

Pieter never started out with a winemaking philosophy, instead he has been driven by practicalities and through this has learnt how forced adaptations created unexpected results. Whilst these results might not all have resulted in a better wine, it is this constant adaptation approach working with tiny bespoke cuvees that has seen him learn how vinification and élevage works in so many different ways that has made him one of South Africa’s most daring and creative winemakers today.

From starting out selling Blankbottle wines from the boot of his mum’s 1982 Mazda car, just to pay his way through wine school to 20 years later producing bespoke cult cuvees that sommeliers and wine aficionados are raving about all over the world is some achievement. The stories behind his labels are equally fantastical and certainly capture the energy and spirit of this maverick producer.

Retirement at 65 is a Cinsault red wine grown at altitude producing a wine with an incredible bouquet and mouth-watering freshness. The fruit purity is exquisite, the texture of the tannins very fine and bursting with raspberry, cranberry and wild blackberry fruits. The aromatic complexity from whole bunch fermentation adds a smoky herbal and floral complexity that is wonderful. This is a wine that blows any negative preconception of single varietal Cinsault out of the water.

Pieter identified this vineyard site in Darling had been left to its own devices. He approached the grower who said the vineyard was 64 years old, yet he had never picked the grapes because the birds always ate them prior to harvest (since there was no other food sources around). Pieter offered to buy bird nets for the site in return for first refusal to the crop. The grower agreed and the nets were purchased. However, that vintage a flock of sheep entered the vineyard and ate all the green shoots destroying another years’ worth of crop. Pieter then persuaded the owner to fence off the vineyard protecting it against the sheep. A year later at 65 years of age the vineyard produced its first crop. The results are amazing and is a great example of Pieter’s unique approach and the lengths he will go to, to sourcing grapes.

Epilectic Inspiration is an 100% Semillon white wine aged on its lees for 18 months, part aged in amphora and part aged in oak barrel. The result is a wine with a really beautiful texture – it is so fine and integrated with a lovely weight, yet still retains an amazing refreshing acidity.

In the past Epileptic Inspiration consisted of 100% Elgin vineyards - a straight Semillon. But in 2018 Pieter wanted to get the wine to a new level - the final blend today is made up of 3 different components from 2 different wine areas:

Pieter states “I am not a fan of greener wines and therefore concentrate on picking the grapes when it is fully developed, which results in a riper-style Semillon”.

The story behind the label was another extraordinary episode that happened to Pieter. At 30 he started to suffer from epilepsy and one fit in particular he believe changed something in his brain which inspired his new passion for drawing and design.

He goes on to explain: “Since the beginning of BLANKbottle, I have been designing my own labels. At first, it was because there was absolutely no way I could afford designers. I made use of Microsoft Word, typed BLANKbottle, placed it into a block and played around with the colours - no designing skills required at all. And, to be honest, for the first 10 years I actually didn't like my labels much (besides maybe the honesty of it). Every year, I would again have to fight off the desire to employ professional label designers.

He goes on – “When I have a fit, what happens to me at first is that I forget everything. My long term memory returns quite soon thereafter (within hours), but I find that my short term analytical memory takes about 2-3 months to return - if at all... And this is how I started to design my new labels for the 2013 wines. I could not look at the computer due to the flickering screen. So I started making use of scissors, paint, Lino, pencil and old paper. And the result: I think I had a breakthrough in design, inspiration of Epileptic proportions.

So the drawing and designing of my own labels came as a direct result of my epilepsy. And here’s the strange part which I cannot prove - I believe that something in my brain changed due to the epilepsy. Before epilepsy I had no skill or desire to draw paint etc. Now I still don’t have the skill, but at least I like my labels! All 47 of the ones coming your way in 2019.”

We have small allocations of a number of Blankbottle and Keermont Estate cuvees which we hope to release in the next few weeks. 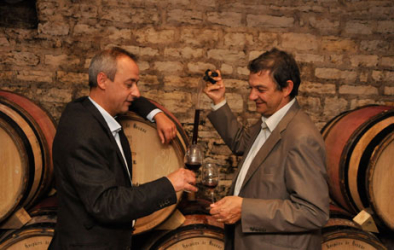