A New Era for Domaine Billaud-Simon

In 2014 Domaine Faiveley acquired one of the best-known names in Chablis, Domaine Billaud-Simon, amassing around 20 hectares of vineyards in some of the best terroirs in the region. During the takeover, Olivier Bailly stepped in as winemaker taking charge of winemaking from the 2014 vintage and gaining full viticultural control from 2015.

Olivier has had some great experience both in and outside of Chablis. His career began working in the Cote d’Or in Savigny Les Beaune, while studying oenology and viticulture in Beaune, Montpellier and Dijon before working in vineyards and wineries all over the world - from Chile to Switzerland. In 2006 Olivier moved to Chablis and was smitten with the place he has remained there for the last 13 years in various roles within the wine industry. His all-round experience of the people and the terroir in Chablis made him the perfect choice to take over such an historic and important domaine.

As one of the original wine-producing domaines in the region, Domaine Billaud-Simon has retained some exceptional terroir within the appellation’s original historical boundaries. Originally these boundaries included just 400 hectares covering all the Premier and Grand Crus and surrounding vineyards of the village. In 1980 the area was extended to cover 5000 hectares and the variation in quality remains questionable. All the Billaud-Simon sites have great vine age and some of the Premier Cru sites are very old indeed – one of the Montee de Tonnerre sites has an average vine age of 83 years.

From Olivier’s point of view, it was important to stay true to the original philosophy of the domaine and to produce a very pure style of Chablis with good ageing potential. He wants the wines to reach their peak at around 5 to 15 years of age. However, his work in the vineyards is in keeping with what Oliver calls the actions of the “ecologist generation”; the younger generation in the vineyards are banning the use of chemical weed killers in the vineyard, opting to plough instead. Precision viticulture is becoming normal practice in premium vineyards – vineyards are monitored vine by vine rather than using timed sprayings, whatever the circumstances. According to Olivier such monitoring in the vineyard is essential to producing the finest fruits and makes the real difference to the quality of the wine.

Olivier and I then start to discuss the identity crisis that grips Chablis: a recurrent issue of quality over quantity and the dual identities of Chablis as a simple aperitif or an aged fine wine. Olivier admits there are two very different camps today in Chablis, exacerbated by the scarcity of product in the last few years. Frost and hail damage has decimated volume within the region. Whilst the problem with the global success and reputation of Chablis means demand outstrips supply and larger producers are pressurising the authorities to extend the appellation boundaries again. This group of growers also wants to increase the limits on production levels, further diluting the wine.

Olivier and Domaine Billaud-Simon are firmly on the other side of the fence, believing quality not quantity is where Chablis should be positioned. For the moment, Olivier is confident the quality argument will win out. He states premium Chablis remains fantastic value in terms of quality-to-price ratio, particularly when compared against their Chardonnay neighbours in the Cote d’Or. As the quality in Chablis increases and the Cote d’Or prices continue to rise, he thinks Chablis is set for a bright future.

This leads us on to what makes Chablis so unique. Why is it so different to Chardonnay from the Cote d’Or? Having worked in both, Olivier was clear about the differences – obviously the secret lies in the terroir! Chablis has very low water retaining soils which means vine density is much lower and such soils keep the Chardonnay fruit naturally very lean and linear in a normal vintage. This keeps the acidity high - Olivier states the wines are picked on acidity levels rather than fruit maturity. Particularly when making age-worthy Chablis, acidity levels are all-important. In the Cote d’Or the Chardonnay is grown on clay-based soils resulting in a fatter, richer style. Oak influence works well with the fatter style, but with Chablis, new oak tends to take away the subtleties of flavour and its linear finesse. If anything, old oak barrels and concrete eggs are preferred.

We begin to reminisce about some great bottles of aged Chablis we have both had from the likes of Raveneau and Dauvissat. We agree some of these wines really reach the top echelons of fine wine production and that, for the moment, these producers remain head and shoulders above other producers in Chablis. Olivier agrees there is tremendous potential for other growers to commit more to quality than quantity as there is real demand for premium Chablis. He believes Billaud-Simon, whose vineyards neighbour both Raveneau and Dauvissat, is just one of the estates that has the potential to produce wines at that level. Thankfully Faiveley are investing huge amounts of money into the vineyard and winery to build on the domaine's already well-established reputation. 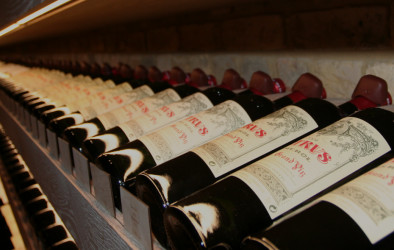