Domaine Georges Lignier has some of the most enviable Grand Cru sites in Burgundy with significant holdings in Clos de la Roche, Clos St Denis and Bonnes Mares. Based in the village of Morey St Denis, the domaine is today run by the ever-thoughtful Benoit Stehly, the great grandson of Georges Lignier, who has been in charge of the property since 2007.

It remains one of the great value domaines in the Cote de Nuits and the wines are undoubtedly the top-value picks from these top sites in 2018.  This week we met with Benoit in London for a second look at his 2018s, following our initial autumn tasting at the domaine.

The times are a-changin’

Benoit’s honest approach to his viticulture, his confidence to experiment and his continual strive towards creating “thought-provoking” rather than “perfect” wines, always makes for an inspiring visit.

He is not one to shy away from making changes in the vineyard in accordance with the undeniable rise in temperatures over the last decade in Burgundy. Warm vintages are becoming common place and therefore he thinks a fresh approach is required to make the most of it.

Benoit is unique in Morey in keeping a permanent grass cover in the vineyard creating competition with the vines and forcing deeper root systems. It also serves to increase humidity, off-setting the heat of a hot vintage and slowing down the ripening, thus retaining freshness and protecting against the grapes cooking on the vine. It also protects against erosion as well as creating more biodiversity in the soils. Others in Morey have since tried and failed with the same technique and this he believes was down to his own luck. First planting the grass in 2012 he was fortunate to have had three consecutively wet springs that enabled the roots to bed in. His neighbours who have since tried have seen much drier Springs in ’14, ’15, 16, ’17 and not been able to maintain them.

In a warmer vintage like 2018, Benoit looked to similar steps he took in 2015 to best deal with the heat. He has thrown out the rule book of picking 100 days after flowering, knowing that in vintages like these the grapes ripen much quicker.

The Vineyards of Morey St Denis

Benoit believes the very real effects of climate change has seen two quite different styles develop in the Cote du Nuits and in recent vintages this has only become further exacerbated by ever warmer summers. According to Benoit, about a third of Burgundy producers, typically the younger (or at least younger-spirited vignerons), of which he includes himself, are picking on freshness. The older generation continue to pick on ripeness – governed by the general rule of picking 100 days after flowering.

Both styles have their advantages, picking later gives you fully developed aromatic complexity but with the risk of escalating alcohol levels and less freshness. Benoit prefers to pick on freshness, retaining “classical” alcohol levels – between 13.2 – 13.6% abv and terroir specificity, whilst avoiding what he believes is over-ripeness in the fruit flavours. The risk seems to of paid off with his 2018s.

Picking times were regulated by the French government in Burgundy up until 2005. The practice was discontinued following the disastrous timing by the government during the very hot 2003 vintage in which they only allowed picking to start in September (too late for many). The delay was due to government officials unable to declare until returning back from their summer holidays! Many vignerons broke the law to save their crop, others were not so lucky. Following the outcry, the government in 2004 declared that producers could pick from August 1st, effectively making their declaration pointless. Ever since, the practice has been discontinued.

However, as Benoit explains, many vignerons had become reliant on officials to tell them when to pick, rather than making their own judgements. Abandoning the declaration exposed all the vignerons that had little understanding on when was the right time to pick. It also further debunked the now outdated notion that you pick 100 days after flowering.

Many of Benoit’s neighbours, even in 2018, were still picking 100 days after flowering and in his opinion were producing overripe wines with huge alcohol levels. For Benoit, Burgundy over 14% abv loses its typicity and sense of place. He states how Burgundy has always been one of the coolest regions in the world to produce Pinot Noir, and in the past the leaner, difficult vintages were all too common. Climate change has produced warmer, riper vintages which according to Benoit has at least given the vigneron more choice in the style of wine they want to produce. With the warmer weather, one can either opt for a fresher style or a riper style and this comes down to choice of when to pick.

For Benoit, the picking time is the key factor to get right and remains the most stressful time of the year. With high temperatures and a persistent drying wind at harvest, picking times in 2018 had never been more important. Picking just five days later saw the alcohol level rise by 1%. Fortunately, Benoit was one of the first out in the Morey St Denis vineyards beginning to pick from the 5th September, with all the grapes in within 10 days, starting with his Grand Crus and ending with his coolest Village sites.

The oldest vines dating back to the 1930s gives this village wine plenty of personality coming from two plots north of the Chambolle village whose soils are rich in iron. The wine has wild floral aromas and light mineral ferric notes with silk-like melted tannins. The purity of fruit on the palate is fantastic with great mid palate weight and expansive breadth. This is excellent quality for village level.

Bright translucent purple colour with perfumed notes of violets, wild flowers and red berries. The palate has a lovely spectrum of fruit from vibrant crunchy blackberry fruit to more candied red cherry and cassis. This interplays with a more Morey-esque savoury tone of fresh soil, hints of sage and bay providing more refreshing earthiness to offset the ripe fruit. The tannins are beautifully integrated and very fine, well balanced with refreshing crunchy acids.

Benoit calls this his baby Clos de la Roche, sitting directly below the Grand Cru vineyard and sharing the darker spice, brooding fruit and complex perfumes of orange bitters and sweet herb notes alongside rich plush blackberry fruit. This is a very serious gourmand style of Burgundy that is built to age and will develop beautifully in bottle over the next decade.

Surrounded completely by Grand Crus, this has a lovely elegance and sweetness on the nose, the intensity and generous character of top Gevrey and a really wonderful balance. Red fruits, raspberry, a touch of juniper, pepper, silky tannins that are already so soft and integrated. Mulberry and macerated raspberry on the finish. Great length and freshness. This is serious.

Vines between 60 and 70 years old – powerful red fruits with fresh peppery notes and minerality on the nose. Superbly balanced tannins with a light sweetness, an expansive palate of dark berries and cherries opening to a long and elegant acidity, which amplifies the minerality of the terroir. Dry and powerful, the spine of this Clos St Denis provides amazing structure and exciting length on the finish. Will age incredibly well.

Deep nose of blueberry and purple fruit, savoury herbs and spice. Tightly wound and intense, the palate shows a hint of dark chocolate, oak, dark cherry and red fruits. A chunky personality, touch of pepper on the finish and good length. So much potential here.

Grown exclusively on the red limestone soil (Morey-side) of Bonnes Mares rich in iron, from 100 year old vines. A captivating nose of mandarin, touches of spice and a broad spectrum of red and dark berry fruits. A core of red cherry and raspberry on the palate, mouth-watering acidity balanced by sensuous tannins. Structured yet elegant with an intense fresh berry finish. Outstanding. 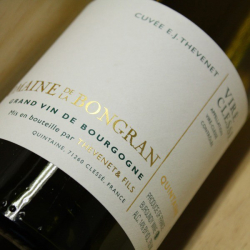