“La Place de Bordeaux” is the historic distribution network used to distribute the wines of Bordeaux globally and this is briefly how it works: wines are sold from the Chateau to Bordeaux Negociants (via a Courtier) before being sold on to individual wine merchants and then on to the consumer. This has been an historic trading system originating from the Middle Ages. Originally, aristocratic owners of Chateaux did not want to deal directly with the merchant classes and therefore used courtiers who would act as the go between from the Chateaux and the negociants.

Whilst times have changed somewhat - the aristocrats in many cases often replaced by banks and insurance companies - the system still remains in place. La Place de Bordeaux’s antiquated distribution system is often seen by many in the contemporary wine scene as outdated and cumbersome however Bordeaux’s historic and established route to market has become an attractive approach for other fine wine estates from outside of Bordeaux.

These early weeks in September are becoming established in the fine wine world as the second most important time in the year for Bordeaux negociants following the Bordeaux En Primeur campaign that runs through Spring. This is because “La Place” has become the place to go to source new releases of top wines from Napa, Chile, Argentina as well as Italy’s Super Tuscans. In these last few weeks we have seen the releases of: Solaia, Opus One, Sena, Masseto, Clos Apalta etc. all exclusively released via the Bordeaux Place. In many ways it seems no surprise since the Super Tuscans, Napa and much of South America’s top wines are “Bordeaux blends”. If anyone knows how to sell Cabernet and Merlot based red blends, it is the Bordeaux negociants.

The partnership between La Place and the New World Icons started with Opus One. This was an unsurprising move since Opus One started off as the collaboration between Napa legend Robert Mondavi and Chateau Mouton Rothschild. It only made sense for the Bordeaux “Place” to help distribute wines that, whilst not from Bordeaux, were made and owned by people in Bordeaux. Similarly Almaviva (also part owned by Mouton Rothschild) became an American icon sold exclusively through the Place. 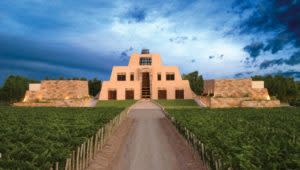 When speaking with Bordeaux negociants about these partnerships, it wasn’t such a straightforward transition to begin with. The first few vintages of Opus One and Almaviva were not interesting to many traditional buyers of Bordeaux. The link between the two styles just wasn’t enough. Many negociants struggled to sell the wine despite the pressure coming from Mouton Rothschild to promote it. Also with the wealth of choice coming from Bordeaux itself, not to mention the volume available at a wide variety of price points made additional wines from the US and South America just further dilution of the market as well as a difficult sell.

These days it is a different story. With the “New World” wines of California, Chile and Argentina moving away from the over-ripe fruit bombs, high alcohol and high oak maturation; the new world has started producing really elegant and excellent wines brimming with verve, structure and clarity. Add to this high praise from influential critics and suddenly you have a global audience hungry for new world releases that in many instances offer fantastic quality for the money.

In the past, there were negociants who were thankful they didn’t have the added pressure to sell the “new world stuff” who are now kicking themselves that they don’t have any access to the stock. With a so-so Bordeaux 2017 campaign; a string of fabulous vintages from the US, Chile, and Italy have been a huge boost for some negociants on “La Place”. For fine wine producers with very little infrastructure in terms of marketing and distribution, selling their wine through the Place de Bordeaux has been the perfect place to sell their wines. As the wine is released on to the market via La Place, within hours, the wine would have been offered to thousands of merchants reaching millions of customers almost immediately. For a single winery to invest in reaching that sort of volume of potential customers so quickly, would simply not be financially feasible and therefore becomes a huge asset to these fine wine producers.

And La Place wins too - it provides new releases on to the market at a time that tends to be quiet for Bordeaux sales following on from the Bordeaux EP campaign. The added advantage for the negociants is there is no courtier to contend with, removing the middleman. The risk the negociant takes is the same it takes with Bordeaux – that is no matter how the vintage is, the negociants have to take the wine. The good side to this is that there is no one better placed to sell the good, bad and the ugly, than the Bordeaux negociant who has access to every single type of customer. Whilst some may be driven by scores, others are driven by price, drinkability, etc - they are perfectly placed to provide the many needs of wine drinkers all over the world, operating from one place. These days La Place de Bordeaux continues to increase its portfolio of wines from outside of Bordeaux -  Testamatta and Coleres are probably the most recent super Tuscans to have agreed to sell their wines through the Place. These sort of contracts only further secure its relevance in the distribution of world class fine wine around the world.