The second quarter of 2013 hardly started with a bang. Bordeaux 2013 was the third vintage in a row to be met by negativity from critics, merchants and customers. Those that have tasted the 2013s will attest to some attractive and easy wines being made, though prices for many were simply incorrect and there was little interest in the vintage. At FINE+RARE, en-primeur sales for this vintage were less than half of our sales for 2012, which was hardly a busy year in itself. Whilst there were a number of wines worth buying, the vintage as a whole has been overlooked. Mark my words, though: many of these wines will be delicious drinkers in a few years’ time.

Moreover, the whites of 2013 are lovely, and met with an enthusiastic response from our customers; Domaine de Chevalier Blanc and Les Hauts de Smith Blanc both make it into our top ten bestselling wines of the quarter.

In the second quarter of 2014 we sold 5,132 different wines. This figure always brings a smile to our faces – as far as we’re aware no one comes close to matching the choice that we offer. Our top selling wine by value was the sensibly-priced 2013 Ch. Mouton-Rothschild; by volume the ridiculously good 2010 Barbaresco, Produttori del Barbaresco. Honourable mentions go to 2004 Rioja Gran Reserva 904 and two 2011 Bordeaux: Clos de Sarpe and Feytit-Clinet.

1961 Hermitage, La Chapelle. A long story and a great deal of hard work lay behind the sourcing of three absolutely immaculate three bottle cases of 1961 La Chapelle, arguably one of the most iconic wines ever made. The price? A snip at £11,000 per bottle in bond. Just looking at the bottles got me excited – it was a bit like meeting the Queen. These sold very quickly and it was almost a shame to see them go.

Private cellars: in June we offered part of one of the most impressive private cellars we have seen. Predominantly Burgundy, it covered all the big names and all of it in pristine condition. It had our mouths watering and those of our customers too. Our Private Reserves service rolls a little under the radar at the moment; if you do have wines that you are looking to store or sell then please do let us know. We have two absolutely cracking cellars in the pipeline, including one of the most impressive collections of Barolo we have ever seen.

In the good old days, Bordeaux went up in price: that’s all it did and, as such, customers bought it. It was easier to sell a case of Lafite for ten thousand pounds than it was to sell a case of Talbot for a few hundred. Those days are long gone and these days Bordeaux prices - the ones that were going up – continue to come down. It has been three years now since the market peaked, and price graphs of pretty much any commodity claret look like a Tour de France altitude map on steroids. Herewith 2008 Mouton-Rothschild: 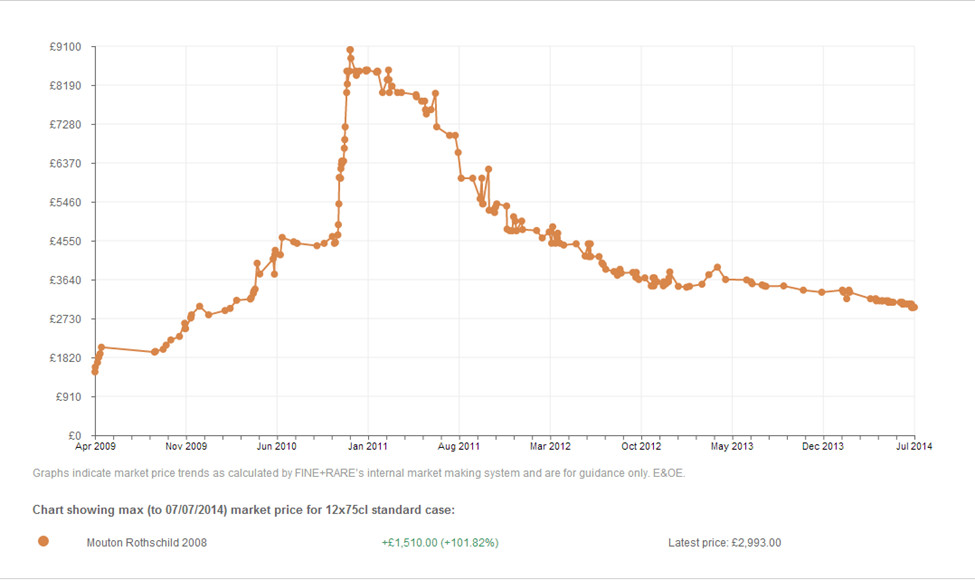 A few have been brave or misguided enough to call the bottom of this drop over the past couple of years, though most have been afraid, or just too sensible, to catch a falling knife. But sooner or later the trend has to turn. Any given wine has a finite production. No more 2008 Mouton-Rothschild, or 2005 Lynch-Bages, or 1996 Latour, will be made.

A look through our Bordeaux listings shows up wines that now appear to be sensibly-priced – prices are at, or very close, to a level where the thought of actually drinking the contents of a bottle looks like a realistic proposition.

The top vintages have fallen too, and this is where the opportunity has to lie at present. The 2005 first growths look sensible again and some a bargain: 2005 Margaux is a legend in the making and at £5,340 has to be a buy. 2005 Mouton is now at its release price.

So whilst much of our success over the past couple of years has been about anything but Bordeaux and the decline of commodity claret, those of us who have been doing this for a while know that Bordeaux always comes back: it’s just a question of when. Is it now? Or do we have a while yet to wait?

"A Wine That Makes You Smile": A Gem Discovered on our Trip to Montalcino