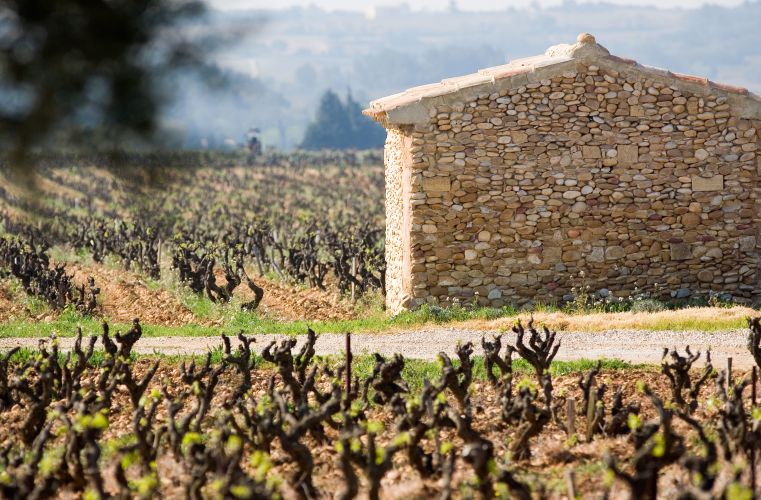 Châteauneuf-du-Pape’s Château de Beaucastel dates back to the 16th century, but it was only after the Perrin family took control of the estate in the early 1900s that it became one of the most iconic and well-respected wine producers in the Southern Rhône. It was the vision of Jacques Perrin in particular – who farmed the property organically from 1950 onwards – that cemented its reputation.

Today his sons – Jean-Pierre and François – are at the helm, with fifth-generation Marc, Pierre, Thomas, Cécile (Jean-Pierre’s children) and Charles, Mathieu and César (sons of François) also all work full-time at the estate. All seven of the children worked in wineries around the world before returning to the family estate. 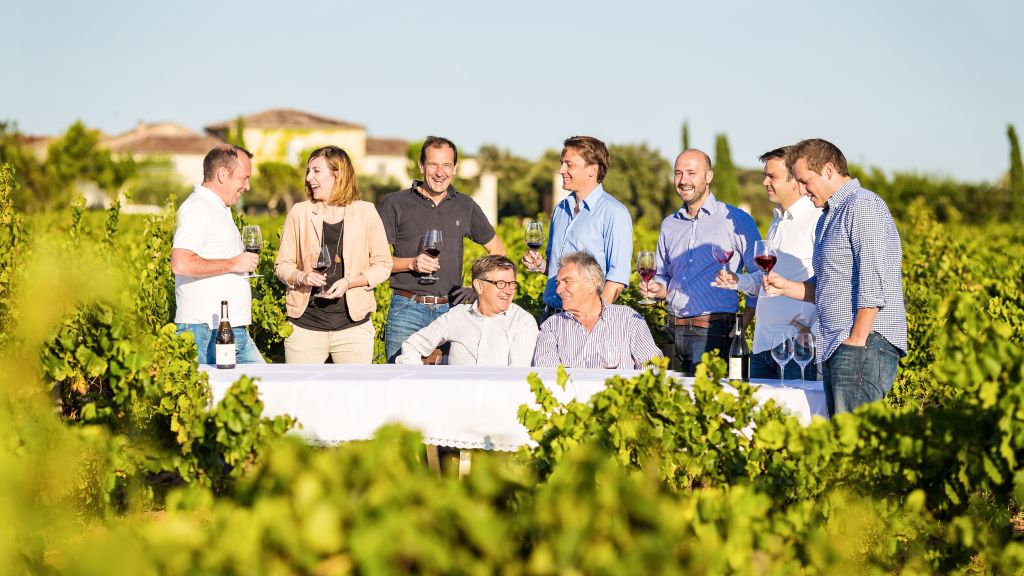 The Perrin Family in the Beaucastel Vineyard

The estate was one of the first in Southern Rhône to become organic (in 1950) and then biodynamic (in 1974), making the vineyard better prepared than most for the climate change effects over the last 30 years. “Beaucastel is the largest Châteauneuf-du-Pape estate in one contiguous plot and it stands at the most northern limit of the appellation. It is a vineyard which is therefore very exposed to the Mistral winds, which has a huge cooling-down effect,” Emmanuel explains, protecting the vineyard from extreme temperatures. The vineyard is based on a limestone bench covered by a rather atypical mix of clay and sand, topped with diluvium “galets roulés” (pudding stones). It is an incredible terroir that, Emmanuel explains, “allows us to combine power and finesse even in the driest vintages. It has always been considered a benchmark terroir in the area and was in fact a cru before the Châteauneuf appellation was created.”

The biodynamically farmed old vines have also helped off-set the ever-increasing drought pressures in the region. “We are extremely fortunate to have older vines,” Emmanuel says. “The galet roulés covering our vineyards also help prevent water evaporation. So all in all we’ve managed to make great wines even in warmest and driest vintages.”

That hasn’t stopped the domaine, however, continuing to adapt their methods to better cope with the ever-present threat of climate change. “We are learning more and more every year and continue to implement changes we deem necessary.” Alcohol levels in the region have undoubtedly risen, an effect that the estate looks to counter.

When Jacques Perrin was in charge, he created a very specific vinification technique which he later patented. He would heat up the must to 80˚C, to start fermentation quickly while allowing Jacques to use less Sulphur, helping fix the colour of the wine, particularly with the Mourvèdre grape which has a tendency to lose colour with age. But this method also reduced the greener flavours in the wine, that came from less ripe grapes.

Today’s climate, however, does not face the same issues, with consistently riper fruit. As a result François and César have phased out this technique, instead opting to whole-berry fermentation, and even whole-cluster ferments for varieties like Syrah, to naturally reduce alcohol levels. These days they also pick earlier, opting for more freshness whereas in the past it was always the goal to maximise ripeness, something that no longer is an issue for the region. 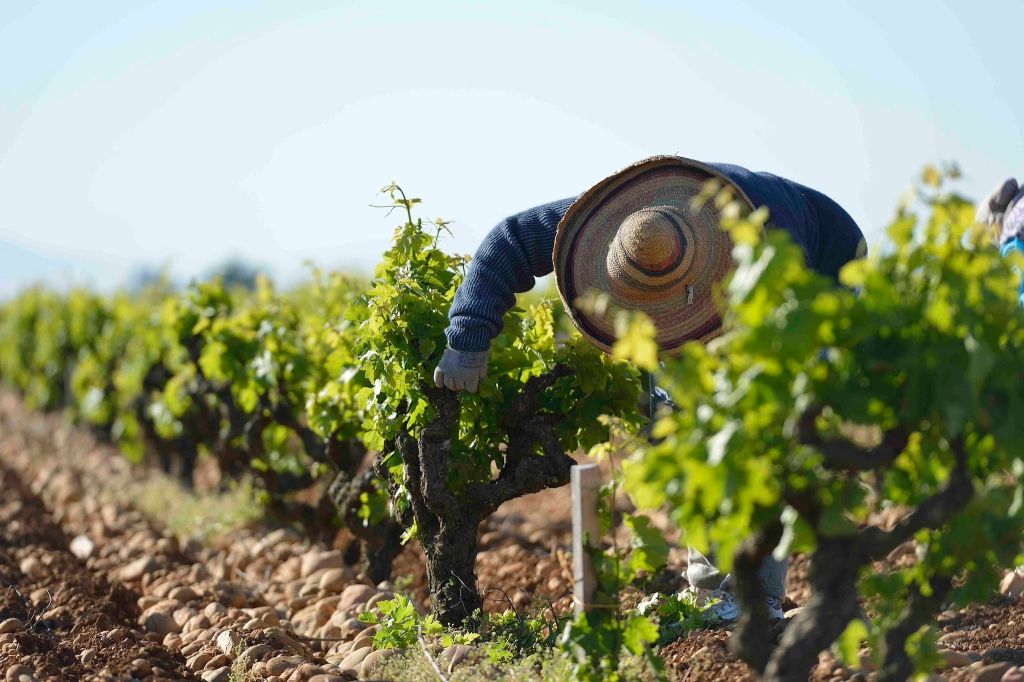 “The estate is always looking at ways to counter the issues of climate change,” Emmanuel continues. “For example, some of the younger Syrah vines are today producing very powerful wines so we are either co-ferment with some Grenache, reincorporating some of the stems in the vat or carry out whole-cluster fermenting,” helping to find better balance in the wines.

In the vineyard too, the team is constantly looking for ways to improve. “We recently tried spraying clay on leaves to limit photosynthesis,” Emmanuel says. The initial experiments have proved positive, but it is still too early to see the long-term effects on the wine and requires further testing.

But this experimental approach is everywhere in the property. They continuously make alternate blends that they age in the Beaucastel cellar and over time compare with their main cuvées to see how well the final blend develops versus a different potential version of the same wine: Emmanuel states the cellars are full of these experiments.

The domaine has also been assessing how the Beaucastel wines age with different fining techniques. “We do a lot of comparative tastings and assessing of older experimentations. For example, we recently did a horizontal of Château de Beaucastel 1996, where each bottle was fined differently, and identified which fining technique works best for ageing the wine – this is crucial in the development of our knowledge and helps us to make sure decisions taken in the moment are the best ones for the future.” 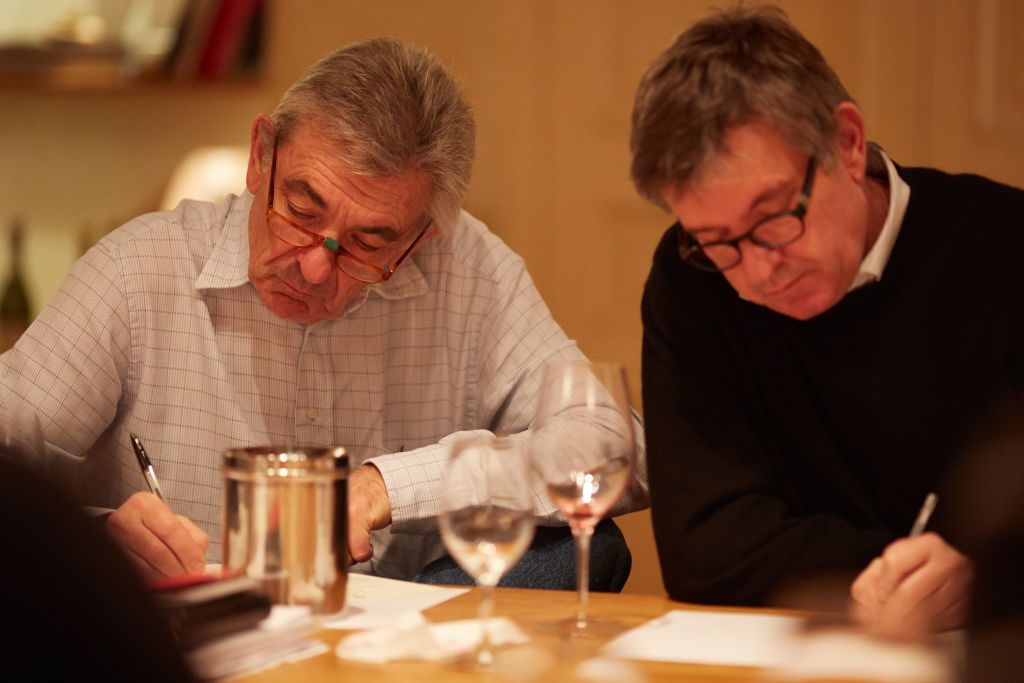 What is distinctive about Château de Beaucastel and the Hommage cuvée in particular is the high proportion of Mourvèdre in the blend. The Hommage is typically made up of 60% Mourvèdre. Emmanuel explains, “Hommage is from our Courrieux lieu-dit parcel, where Mourvèdre was first replanted (post-phylloxera) in 1910. As Mourvèdre is such a late-ripening varietal, Château de Beaucastel needs an outstanding Indian summer to hope for an Hommage vintage. The decision thereafter is taken during the blending tastings.

“When tasting the foudre of Courrieux back in 1989, François and Jean-Pierre were overwhelmed by the outstanding quality and knew that it had to be bottled on its own. Jacques Perrin’s intuition for the best blend from the estate revolved around a dominant proportion of Mourvèdre. As a tribute to their visionary father, they followed his instinct and dedicated this unique cuvée to him.”

Production remains tiny despite the huge demand for the wine. In recent vintages production has been around 6,000 bottles per year. The only difference in the vinification process of Hommage versus their other cuvées is an extra six months’ ageing in 4,000-litre foudres. All the winemaking is fairly hands-off, vinifying all the varieties separately apart from the Muscardin, Vaccarèse and Terret Noir which – due to the tiny quantities – are co-fermented. The reductive varieties – Syrah and Mourvèdre – are fermented in open-top wood fermenters and the remaining oxidative varieties are fermented in concrete tanks prior to the all-important blending sessions with the family.

The 2018 vintage has already been fantastically reviewed, awarded a potential perfect 100 points from the Wine Advocate, with reviewer Joe Czerwinski describing the it as “full-bodied but incredibly silky, combining great purity, richness and length into a seamless, elegant package that should give immense pleasure for decades to come.” The success of the 2018 vintage, according to Emmanuel, was “down to the perfect ripening conditions in mid-October, allowing them to bring the grapes of this late-ripening variety in at perfect maturity – 2018 was fantastic for Mourvèdre.” 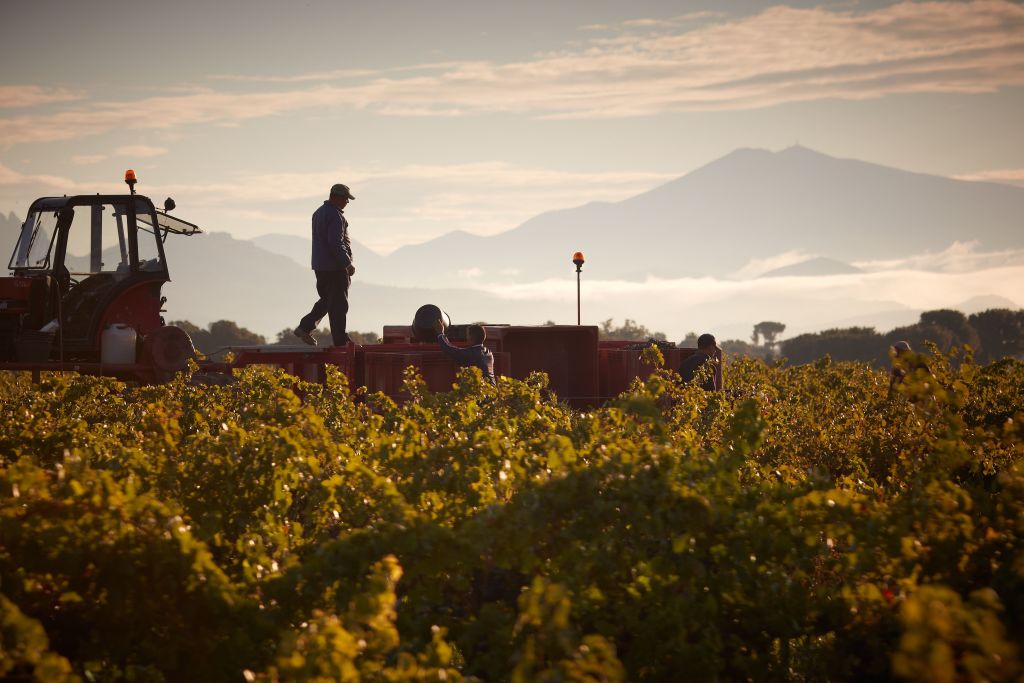 The grapes of the Southern Rhône

Château de Beaucastel proudly uses all 13 permitted varieties of the Châteauneuf-du-Pape appellation. Some even say 18 varieties, since varieties like Grenache, Terret, Clairette and Piquepoul all have a black, pink and grey clone of the variety mixed within the vineyards.

“Each variety brings its own attributes that differ depending on the vintage, but also depending on the amount you use or the blend you make,” says Emmanuel. “For example, when you open a young Beaucastel, it’s very Grenache-driven, even when there is a similar percentage of Mourvèdre. It’s only few years later that Mourvèdre will finally come to the fore, revealing game, leather and savoury characteristics. 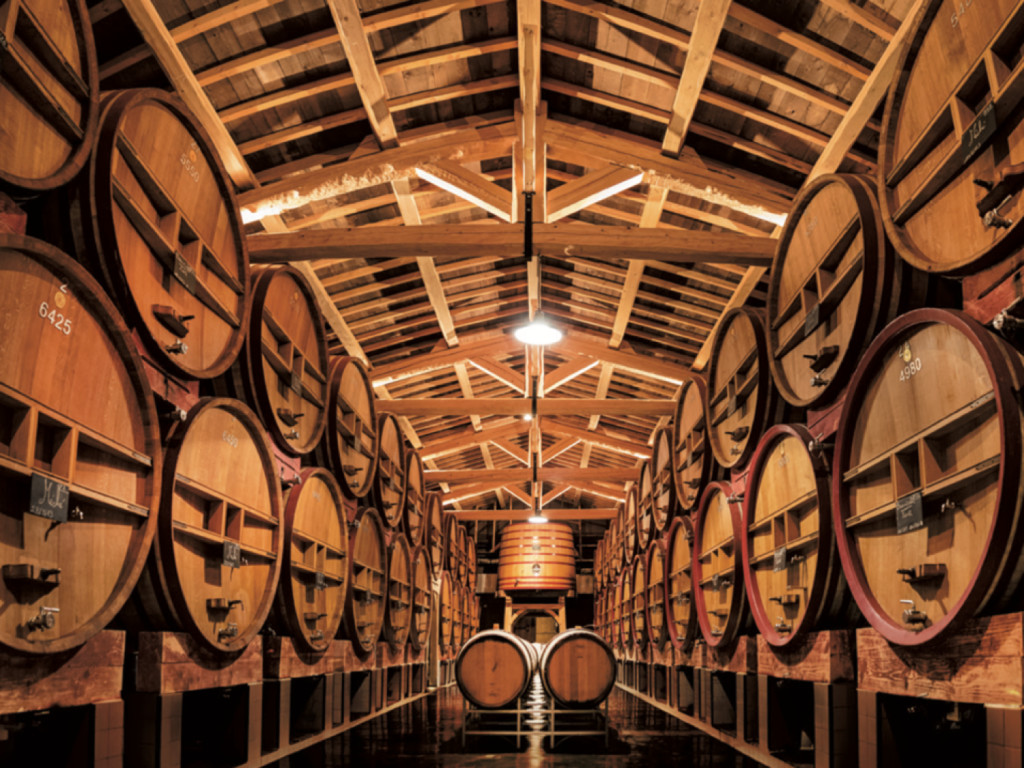 “Individually, Mourvèdre brings power and structure, but when you open an older Beaucastel it delivers freshness and silkiness. Grenache Noir brings kirsch, plum and cassis fruitiness. Syrah adds color, tannin and spices, and when blended with Mourvèdre and Grenache it brings truffle notes. Counoise can be considered the Pinot Noir of Châteauneuf-du-Pape and has a distinctive white pepper note. Cinsault adds freshness, Muscardin and Vaccarèse are very floral and add freshness, Terret Noir is light even in color and adds acidity. The white varieties of Roussanne and Grenache Blanc bring elegance and freshness. Clairette is very aromatic and brings unctuosity. Bourboulenc adds tension with notes of almond and vanilla, Piquepoul richness and Picardan adds a lot of bouquet.

“For us it is very important to have all the varieties to make an elegant and balanced wine. However, above all, it is the knowledge and the art of blending, passed on from generation to generation of the Perrin family, that is the key to understanding the real expression of Château de Beaucastel terroir.”

With experimentation at the heart of the Perrin philosophy, the infinite potential of blends when using so many grapes in the wine keeps the extended Perrin family busy monitoring their blending decisions as the wines develop with age. With the 2018 Hommage, it looks like all their experimentation is paying off.

Find out more about Château de Beaucastel’s 2018 Hommage à Jacques Perrin, or explore all the latest releases from La Place. 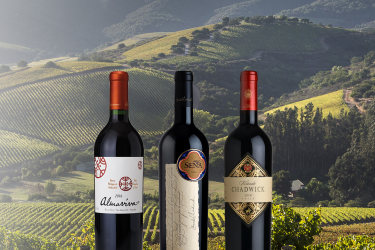