EditorialopinionBrunello 2016: a magical year in Montalcino

Brunello 2016: a magical year in Montalcino 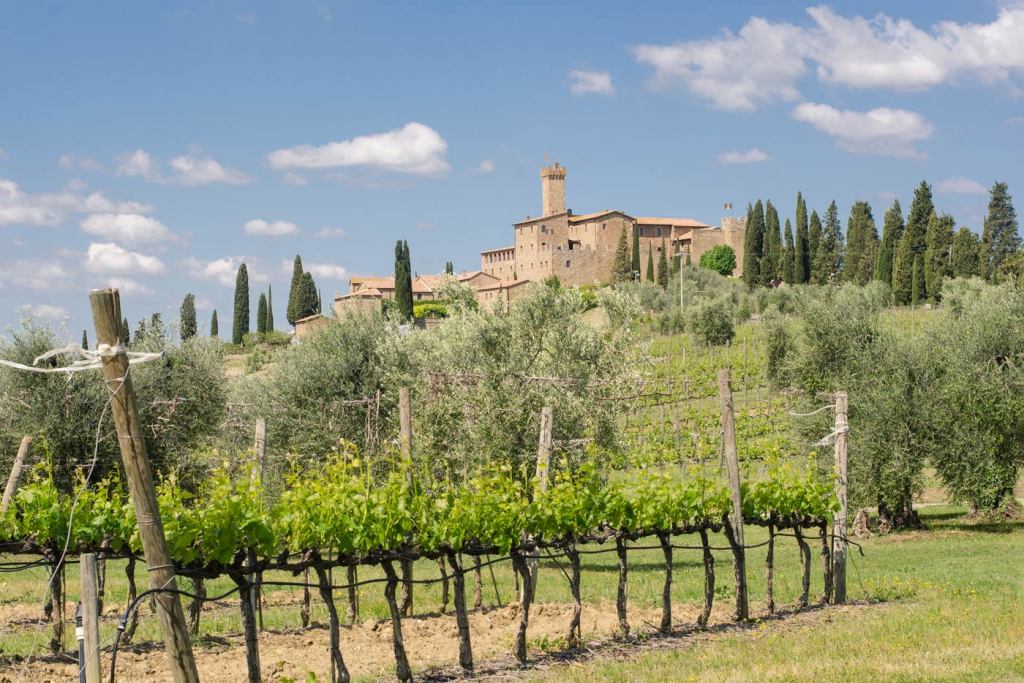 Coming off the back of an extremely successful 2015 vintage, 2016 is a fascinating comparison. Both are exceptional but with distinctly different personalities. 2015 is exuberant, rich and decadent; 2016 is arguably more precise, detailed and elegant. No doubt these vintages will be forever compared, showcasing the extraordinary potential of Sangiovese in this special part of Tuscany.

Speaking to some of the top producers in the region, you can’t help but feel their personal preference is with 2016 – a vintage that might not be so immediate as 2015 but is more complex, classic and with a huge capacity to age. Either way, both vintages are a testament to the increasingly adept handling of the delicate Sangiovese grape in Montalcino in recent times, producing wines of great depth and complexity. 2016 is a touchstone vintage for Brunello di Montalcino. It is a vintage of purity, so free from affectation that it will no doubt be the benchmark against which all other vintages are compared, past and future. 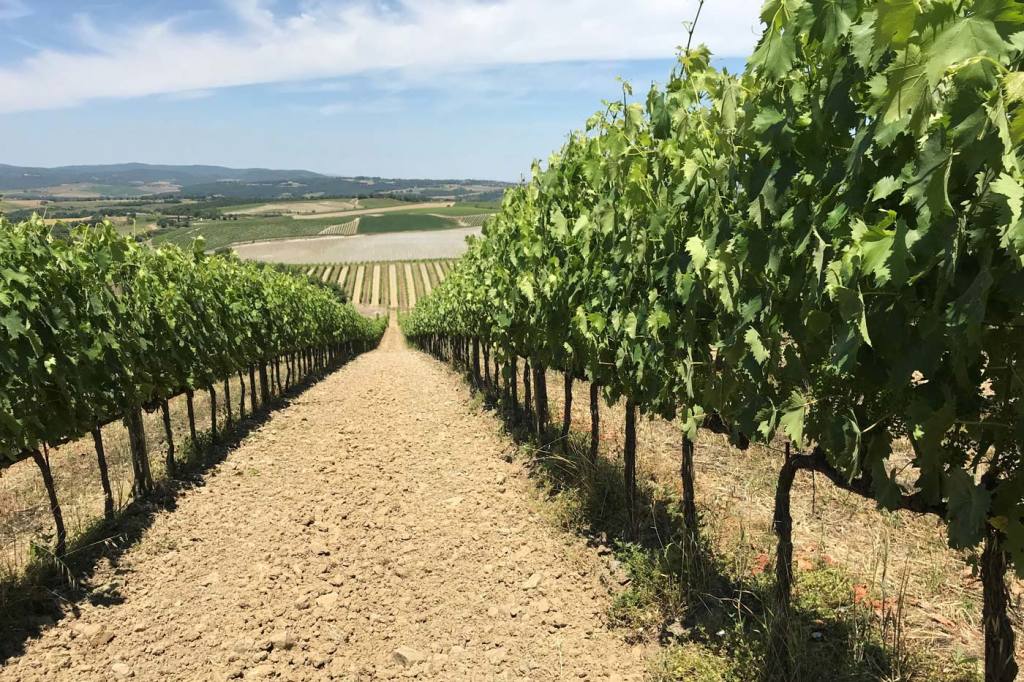 For many vignerons in Montalcino the growing season in 2016 requires little exploration simply because it was so temperate. “2016 was the perfect vintage for my mental state” says Francesco Ripaccioli from Canalicchio di Sopra. From start to finish the growing season could not have been better. Francesco explains how in some vintages it is the growing climate that dictates the style of the vintage. If it is a hot vintage you feel it in the grapes, the sugar concentration, the berry flavour, the added alcohol and power this brings. In a cool vintage you feel the balsamic notes and the ethereal perfume. “Nature cannot be controlled but can be interpreted” he states, “and sometimes a big effort is needed to interpret a vintage”. But 2016 was the complete opposite. In 2016, nature did not dictate style. The moderation and clemency of the climate allowed the grapes to develop in pristine condition devoid of any characteristics brought about by extremes. This, Francesco contently concludes, “allowed for each of the territorial identities throughout Montalcino to shine through”.

The year began with a very cold spell in January with 12 days below freezing, which cleaned the vineyards of disease and mildew spores from the previous vintage. Bianca Ferrini of Podere Giodo outlined the importance of the rainy winter that followed, building up good groundwater reserves for the drier summer months ahead. The spring brought more rain but the risk from fungal attacks stayed low, no doubt due to the cold winter leaving the vines in good health. Budding, flowering and fruit-set all came and went without issue. Ideal conditions saw impressive yields with good, even cluster formation and healthy vines right up to the point of veraison (when the grapes start to ripen). Despite good yields there is little concern this will lead to diluted wines, Francesco Ripaccioli commented. Under the DOCG, grapes grown within the Brunello di Montalcino designation have strict rules on production – capped at 8,000 kilos per hectare (which results in just 1.5 kilos of grapes per vine). Although Canalicchio di Sopra crop a little lower than that, over-production in the region more generally in 2016 is not an issue. 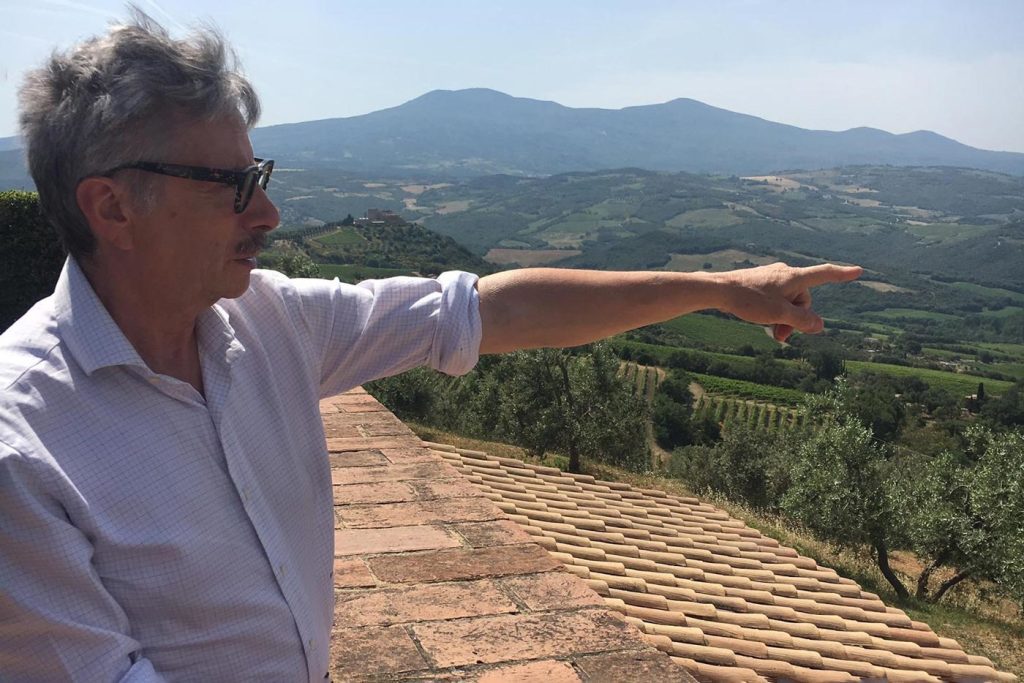 Intermittent rain showers continued up until August meaning that Poggio di Sotto (who practices organic viticulture) found the growing season more challenging than most. Fortunately for them, explains Luca Marrone, the southern location of their vineyards and the “never-ending west breeze from the valley kept the vineyards dry”, protecting the grapes from any onset of mildew.  Bianca Ferrini also outlined the importance of the winds during the summer: “the constant breeze in the vineyards encouraged good balance in the vines and was central to the outstanding organoleptic properties that developed in the grapes”. For Bianca, the “regularly paced rainfall, the summer heat and the drying winds laid the foundations for a great vintage.”

Another key element to the style and success of the 2016s was the notable diurnal drop in temperature between day and night during the summer months. This ensured long, slow ripening of the grapes which Ferrini states “was crucial both for aromas and tannin development”. Riccardo Talenti also emphasised how this kept pH levels low in the grapes, giving the wine high levels of freshness and acidity despite the ripeness, a great sign for longevity. For Sabina Sassetti “2016 was another near-perfect vintage in Montalcino.”

“I cannot remember a better last 20 days prior to harvest.”

The most important part of the growing season is always veraison during the last 20 days leading up to harvest. It is here where rain, humidity, sun hours and diurnal temperatures are key. It is where the aromas, flavours and acid profile of the wines are formulated and in 2016 Francesco Ripaccioli cannot remember a better last 20 days prior to harvest. There was no huge temperature hikes of 40 degrees like 2015. The highest it reached was 35 degrees. A great vintage he believes, needs to reach 2000 on the Huglin sun hours index and in 2016 it was up to 2500. 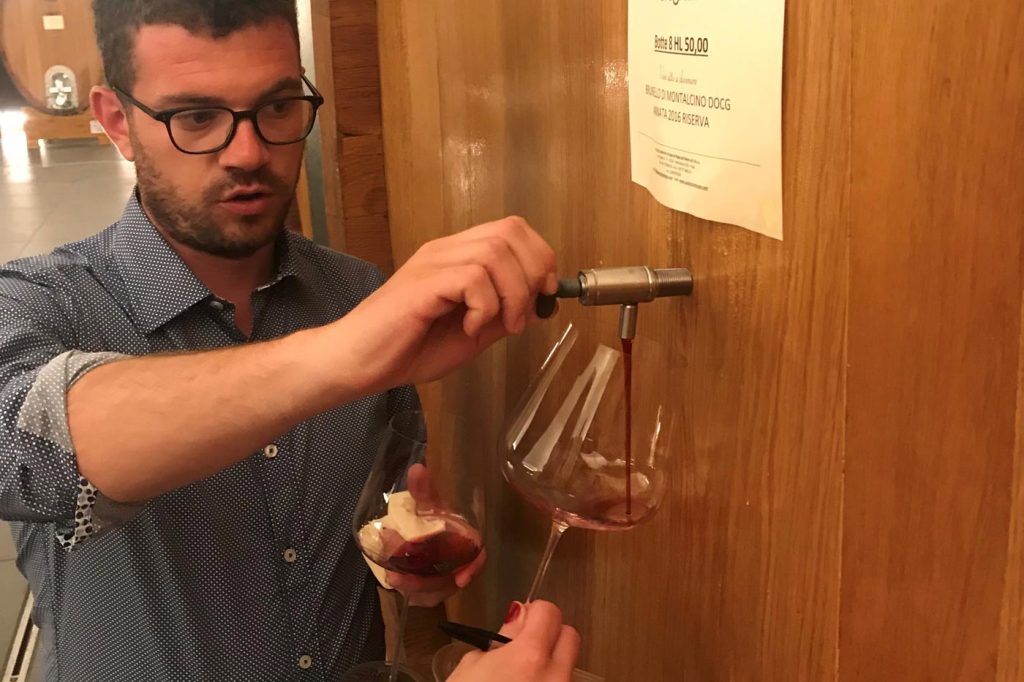 As Gianpiero Bertolini at Biondi-Santi states, right through veraison “the autumn day and night temperature swings played an important role in the final complexity of flavour and health of the grapes at harvest.” Biondi-Santi picked early, starting on the 19th September. “Our concept of “grape maturity” favours the fragrance of the fruity notes and a well-balanced alcohol content” states Gianpiero. Poggio di Sotto also picked some of their crop early, picking their first grapes three weeks earlier than most in Montalcino.  Harvest of the oldest vineyards at lower altitude (200 metres), where the berries are more sensitive to the heat, took place from the 2nd to the 15th of September. “We don't mind if the sugar content is relatively low for the current standard”, states Luca Marrone. “In 2016 the alcohol content was typical for Poggio di Sotto, around 13% to 13.5 % in the first days of picking and 14% in the last days”. Unlike 2015 it was a long harvest for them, picking their final plots in October. Riccardo Talenti started picking on the 18th September: “A normal picking date for Talenti in a great vintage”.

“2016 is the deepest and most elegant of vintages”

For Canalicchio di Sopra the harvest was quick – just 10 days beginning on the 27th September. It was very clear to Francesco that all the fruit was ripe and ready, with very little concern regarding analysis. In vintages which are more difficult to read, he is constantly in the vineyard measuring potential sugar levels, tasting berries, and getting analysis from the laboratory to make picking decisions. In 2016 virtually no analysis was required, the quality of the fruit so effortlessly transparent. For Sabina Sassetti harvest began at the beginning of October. For her, this is when the grapes reached perfect ripening and, consequently, the proper accumulation of polyphenols, allowing tannins to be gentle and easily accessible on the palate.

2015 produced wines that were a product of the extremes of the vintage. The warmth brought a fantastic maturity to the fruit, a richness and opulence to the palate and generally more rounded tannins. 2016 in comparison is less forward and more serious. Francesco Ripaccioli describes the wines as “extremely elegant, more complex, more ethereal”. He appraises the vintages perfectly by describing the 2015s as horizontal wines and the 2016s as vertical wines. Whilst the 2015s might be more approachable and their appeal more immediate, the 2016s are more cerebral and he believes have “double the length of the 2015s on the finish”. He explains that 2015 was a vintage made great by the climate, and you can feel that impact in the wines. 2016 in comparison does not have the exuberance and warmth but instead offers complex floral sensations, tighter, more linear structure and a beguiling freshness which he believes will see the vintage age beautifully.

“2016 is a wine of “nerve” and energy, with lots of fresh fruit and a well present acidic backbone.”

Francesco is still a great fan of 2015 and so he should be, his La Casaccia was awarded perfect scores in 2015. He believes 2015 and 2016 will be compared to the last great duo of top Brunello vintages: 2006 and 2007. It will be down to each drinker’s opinion which vintage is better. “The vintages will always be divided by personal preference”, he concludes. What is so exciting is that whilst 2016 and 2015 are both great vintages, they are also completely contrasting in style. 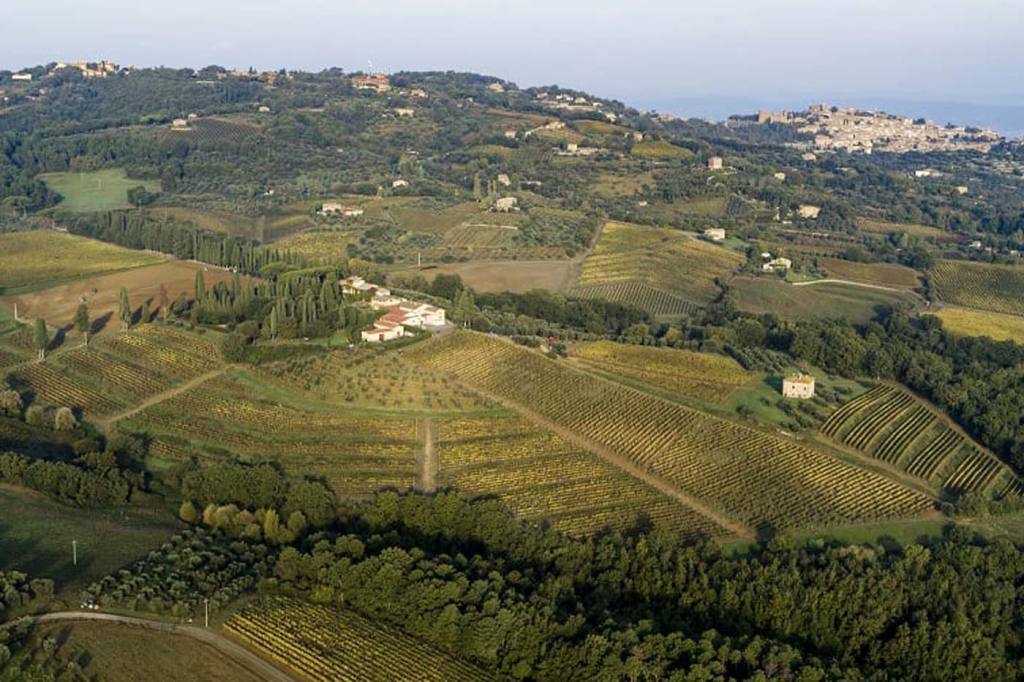 The vineyards of Biondi-Santi

Biondi-Santi’s Giampiero Bertolini believes “2015 is a vintage of sun and warm temperatures. A vintage of generosity, both in structure and alcohol, where the ripe, fruity notes abound. Whereas 2016 is a wine of “nerve” and energy, with lots of fresh fruit and a well present acidic backbone.”

For Sabina Sassetti, the slightly cooler weather in 2016 versus the previous year, gives the wine a higher acidity, resembling the widely praised 2006 vintage. The result is a fresh and elegant wine with a firm structure. James Suckling’s recent report declared Sassetti’s 2016 Brunello potentially the wine of the vintage, awarding it 100 points.

Riccardo Talenti feels “2015 is warmest and most voluminous, 2016 deeper and more elegant”, comparing 2016 to 2006 or a more complex 2010. Luca Marrone of Poggio di Sotto likes to consider the mood of 2015 as “explosive – already lively with the immediate impact of its complexity, in such a way mirroring the early ripeness of the vintage.” The wines of 2016 also imitate its growing season. “It was a slow and steady path. It's gentle and shy at the first approach, with an introverted talent that will reveal power and elegance in the long run.” 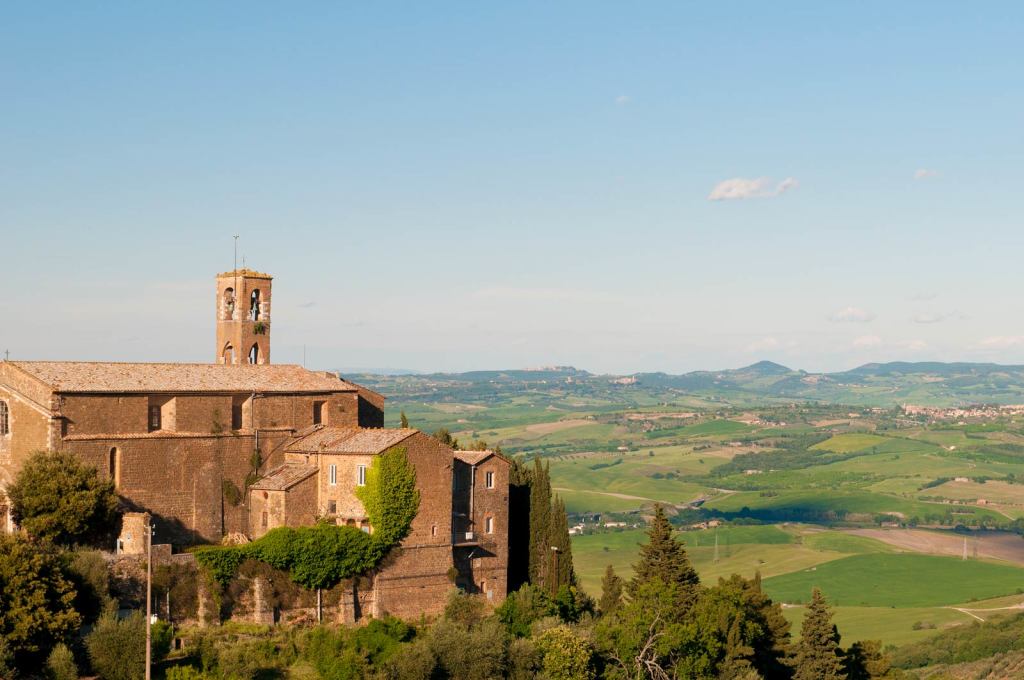 Perhaps the most important factors when it comes to considering your 2016 purchases are purity of site and style. The growing season being so perfect, so unaffected by any climatic extremes, 2016 offers the purest expression of terroir, of variety and of each of the individual Brunello winemaker’s talents. This is a touchstone of a vintage, against which all other vintages, past and future, will be compared. 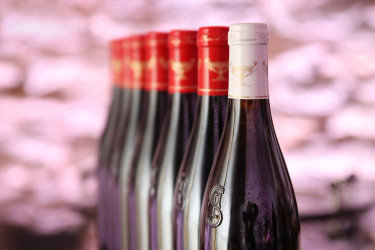