The Historic Rise of Nebbiolo - Italy's "King of Wines"

We look back at the rise of Barolo as the “King of Wines” as its neighbouring sibling Barbaresco had a less fortunate and rocky road to fortune.

The decision to move away from the generic field blends more typical of wine production in Italy at the time, to a single varietal Nebbiolo, was the first step towards Barolo gaining prominence. This decision also came about through aristocratic influence by the Piedmont nobility at the height of its power, prior to the unification of Italy in 1861.

In the 1830s the Marchesi de Barolo married a French aristocrat who as part of her entourage brought with her a talented French oenologist, who after experimenting with many French varietals in the region quickly identified the potential of the indigenous Nebbiolo as a potential single varietal superstar!

This French oenologist started to produce single varietal Nebbiolo on the Marchesi de Barolo’s vineyards and it wasn’t long before the wines gained a reputation amongst the aristocratic classes. The King of Piedmont contacted the Marchesi requesting to taste this wine made from just Nebbiolo that everyone was talking about. The King became a huge fan of the wines and it wasn’t long before the Marchesi was sending 365 barrels of Nebbiolo to the King for him and his courts to enjoy throughout the year. From then on Nebbiolo as a single varietal had begun to secure its place in fine wine history.

The Establishment of Barolo

It wasn’t long before the King purchased his own wine estate in Barolo, which now exists under the ownership of Frescabaldi.

The Piedmont kingdom was the conquering force in the unification of Italy along with the help of the French army that finally conquered the Spanish rule of Sicily and southern Italy and eventually Rome leaving just the Vatican and the Pope isolated from the rest of the newly declared unified state of Italy in 1861. Amazingly there were no diplomatic relationship between the Vatican state and the Italian government until Mussolini reached out to them in 1932.

The power of the Piedmont kingdom and its role in the unification of Italy meant that Barolo retained its status with the aristocratic elites of Italy and beyond and became known as the premium wine producing region of the newly declared country. Its prominence and reputation remained ever since.

The Barolo region became renowned throughout the country and Nebbiolo took its crown as the king of Italian wine. Barolo following the unification became more and more established with merchants moving in to seize the opportunity of this prestigious and unique Italian wine. At this time, apart from the noble families (Marchesi Di Barolo, Rinaldi, Bourgogno) all the rest of the Barolo wines were bottled in Alba under merchant’s labels. Alba, much like Bordeaux, became a thriving merchants hub and the wine began to be exported overseas.

History is full of cruel twists and the development of Barbaresco for much of the 19th and 20th century was a struggle for survival, unlike their more established neighbour Barolo - with its royal seal of approval. Today Barbaresco is being seen very much as Barolo’s equal but its survival is in no doubt down to two central figures of the region Gaja and the Produttori Di Barbaresco.

The History of Gaja of Barbaresco

The history of Gaja is extraordinary and singular in its rise to fame in the region and is testament to the foresight of Giovanni Gaja and his son and French wife Clothide Rey. The Gaja family were not nobility but farmers, yet they became the first to bottle their own wine in Barbaresco in 1859. This became possible because the family owned a small tavern in the town which catered for the merchants that passed through Barbaresco as it was an active Port, distributing goods. At the tavern the Gaja family used to make their wine and serve them from jars at the restaurant. At that time all other growers would sell their grapes to merchants in Alba to make wine.

Buoyed by the income of selling their own wines at their tavern Giovanni Gaja in 1859 then decided to bottle his best barrels in bottle (at this time this was often a blend of vintages). But these became the first Barbarescos ever to be bottled as Barbaresco. The family became further governed by quality when Angelo Gaja and his wife Clothide Rey took over from his father. Their qualitative approach philosophy in a region that at the time was so underdeveloped is extraordinary. The family’s motto – fair, savoir faire, savoir faire faire et faire saviour (Work, knowledge, motivating others to work and passing on knowledge) has not faltered right up until today.

1958 was an important date for the Gaja family because this was recognised in Barolo as a fantastic vintage and it became the first vintage of Barolo to sell for over a 1000 lira a bottle. The average price at the time for the best producers (such as Renato Ratti) was closer to 300 lira. This 1000 lira price tag therefore became a big deal and was the beginning of Barolo becoming recognised internationally as one of the world’s finest and most expensive wines. Yet despite this high price tag of Barolo, Giovanni Gaja was selling his current Barbaresco release at this time for 1200 lira! This just showed the Barbaresco from Gaja even in those early days was outpricing the best wines of Barolo.

The History of the Produttori del Barberesco

The history of Barbaresco outside of the extraordinary success of Gaja was a lot less smooth. Through this period the region remained largely unknown for wine production despite successfully growing Nebbiolo like its neighbour Barolo and being home to the region’s best producer Gaja.

However, there is another unique and profound development that took place in Barbaresco that also has shaped the region as one of Italy’s finest wine producing regions for single varietal Nebbiolo that unlike Barolo did not rely on the aristocratic influence for its rise to fame. If anything, Barbaresco’s rise to fame, including Gaja’s development was the success of the workers of the land rather than nobility. This came in the form of the socialist collective that started to bottle its own wine in Barbaresco under the Produttori Di Barberesco label.

Speaking with Aldo Vacca, today’s chief winemaker at the co-op it was a man called Dominizio Cavazza who was become known as the Father of Barbaresco. He moved to the region when he got a job working as the Director of the Wine School of Alba in 1890. He immediately saw the potential of Barbaresco as a fine wine region and whilst he had no land, he knew if he could persuade the small landowners to compile their crops, he could make a fine wine that they could bottle and sell themselves rather than selling their crop to the Alba merchants. By 1894 he had managed to persuade 5 farmers and 2 landowners to contribute the crop and the cooperative was formed.

At this time socialism was taking hold in many parts of Europe enabling small landowners to work together to enable them to manage their own produce without relying on the aristocratic landowners. Prior to the Bolshevik revolution in Russia in 1917, these socialist projects in Western Europe were seen as a very positive social development and was transforming the social structure across the region. 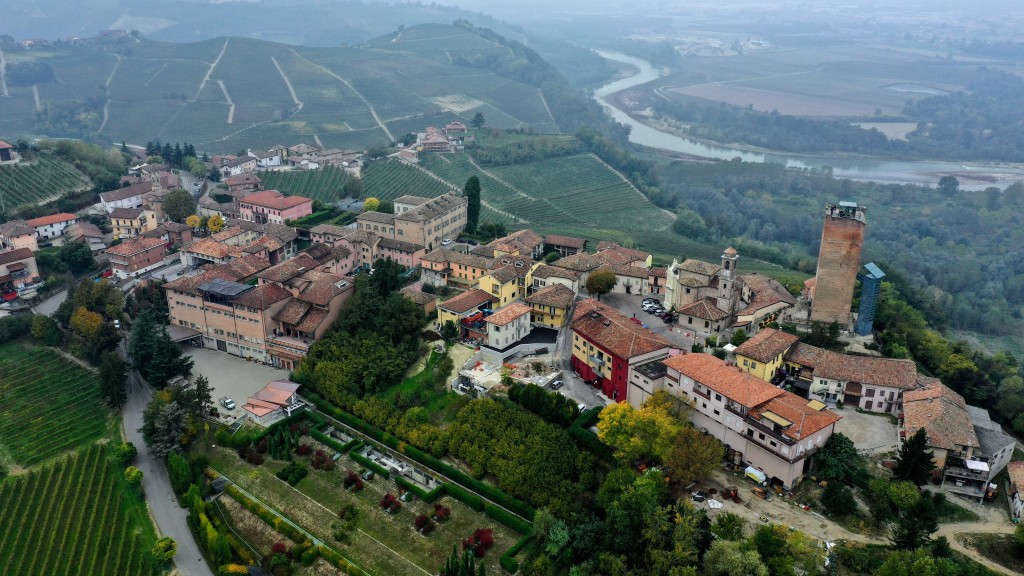 The town of Barbaresco

Initially Cavazza believed that Barbaresco should be incorporated as part of the Barolo District but as Barolo by this time was already well established, thanks to its aristocratic ties, the Barolo producers had no interest in extending their boundaries. This decision in itself was to have a devastating impact on Barbaresco for the next fifty years.

Whilst the cooperative became very successful in the early years, the First World War followed by economic hardship and the rise of fascism in Italy which actively shut down cooperatives in Europe, saw the Produttori cease to exist. It wasn’t until 1954 that the Co operative project was reborn by the local priest – Don Fiorino, who on moving to the region heard about the early success of Cavazza and wanted to rekindle this success. For the priest the cooperative was essential in the survival of the local community that unlike Barolo was decimated by poverty and hardship through the first half of the 20th century.

The 1950s saw the industrial boom in Italian cities which saw huge swathes of the countryside deserted as young men and women flocked to the cities for better wages in the automobile and other industries. To encourage people to stay in Barbaresco, Don Fiorino reopened the cooperative promising any landowners that joined him that they would be given fair and reliable income if they stayed and worked the land.

Dom Fiorino’s foresight was to be commended as ever since it opened the co-op has gone from strength to strength. And similar to Gaja, it is due to a strict qualitative approach that has meant this co-op is today producing arguably the world’s finished wines from a cooperative. These days, thanks to Gaja and Produttori, Barbaresco is producing some of Italy’s finest wines.