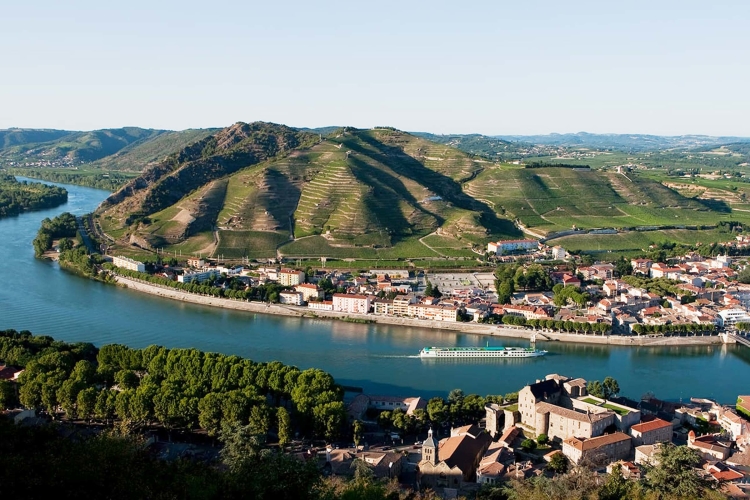 Despite being only 136 hectares in size, the hill of Hermitage is one of the most globally reputed, historical and iconic appellations of the fine wine world. Next week will see us offer a special parcel of Chave back-vintages. Ahead of their release, we examine the last 20 vintages of the red and white wines of Hermitage

The official Hermitage appellation was established in 1936 but its global reputation dates back to at least the 17th century, when it became the official wine of the French Royal household, under Louis XIII. Despite its historical roots, just a handful of producers remain who act as guardians of its reputation today.

The largest landowner in Hermitage is Chapoutier, with Jean-Louis Chave, Delas and Jaboulet-Ainé along with the local Tain-l’Hermitage co-operative overseeing the vast majority of production today. In the last 20 years an increasing number of smaller growers are also now starting to bottle their wine. Today, Chave and Chapoutier lead the way regarding the wine’s collectability, with Chave’s wines being the most difficult to source after their initial release.

Red wines are made from 100% Syrah and represent about 70% of the appellation’s production, with the white Hermitage made predominantly from Marsanne with a small percentage of Roussanne. A tiny production of Vin de Paille (a sweet wine made from air-dried white grapes) is also produced in the appellation when the climatic conditions are right.

The Hermitage hill is a patchwork of individual terroirs with a total of 20 separate climats or lieux-dits. Most notably, Chapoutier bottles a number of his top wines from these single specific sites, whereas Chave prefers to make a blend of the different lieux-dits. The hill is mainly made up of granite rock and this is where the best Syrah is grown, while the white grapes tend to be grown on the flatter eastern part of the appellation where there is more clay and chalk. 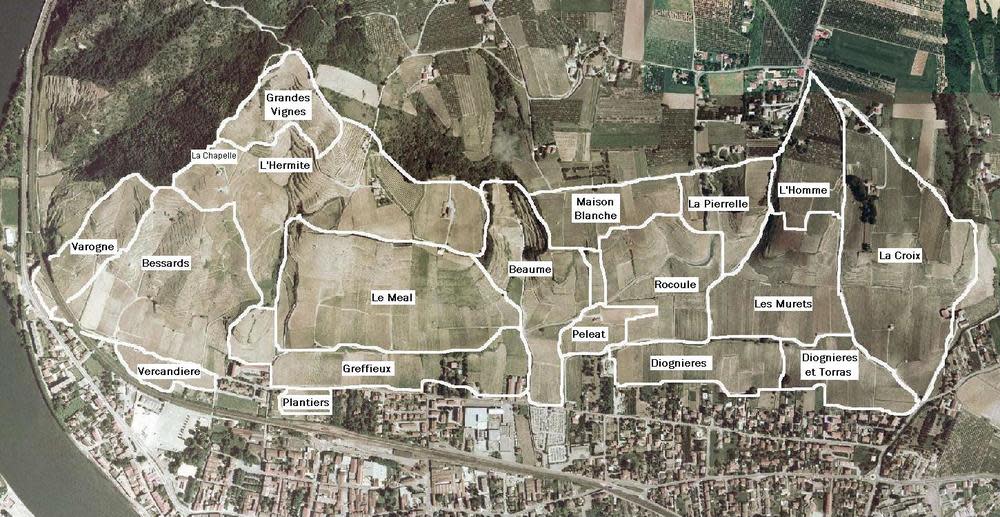 The lieux-dits of Hermitage

This granite rock towering over the village of Tain has long been the Northern Rhône’s most consistent appellation. With its steep gradient and south-facing position, the grapes regularly reach good levels of ripeness. As the climate has warmed, its granite rock, diurnal inference and moderate exposure help retain freshness in the wine, as well as power and intensity. The shape and structure of the hill also protects the appellation from the full force of La Bise wind (known as the “baby Mistral”). The wind tends to follow wet weather, improving the sanitary conditions of the vineyard by reducing the risk of fungal diseases, compared to neighbouring appellations.

The wines of Hermitage have fantastic ageing potential and are the longest-lived in the Rhône Valley, typically entering their drinking window at 10 years of age and holding for another 15 years comfortably and in top vintages much longer. Our own recent tasting of Chave’s Hermitage back to the 1940s proved the incredible staying power of these wines. 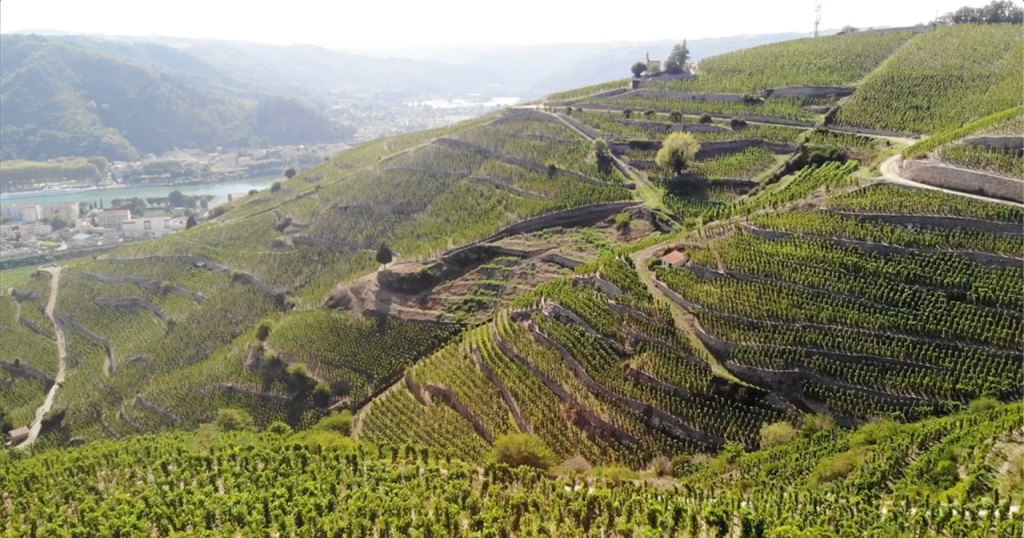 Here is a run-down of the last 20 years in Hermitage – looking at which are the best, the good and the not-so-good.

Hermitage has been fortunate over the last 20 years when it comes to stellar vintages, with ideal ripening conditions and low outbreaks of disease being the norm for the majority of the last two decades. The 2017, 2016, 2015 vintages were three years in a row that saw the whole Rhône Valley blessed with ideal conditions; with 2015 arguably the pick of the three for Hermitage, with both the white and reds excelling. In 2016, Hermitage was hit by a hailstorm greatly reducing yields, though the quality of what was produced is superb. Hermitage fared better than most other major appellations in the Rhône in 2017, when excessive heat was an issue for others. The 2018 vintage has also proven fantastically successful in Hermitage, performing much better than others in the Rhône. It is a very ripe vintage (akin to 2003), but with better freshness.

While many of the top vintages of the last 20 years in Hermitage seem to mirror the top vintages of Bordeaux, Hermitage has proven to be more consistent with fantastic results in the often underrated 2012 and 2006, two vintages where Bordeaux struggled. The 2012 vintage wasn’t universally loved by the critics, but top examples have great tension and concentration, and it is another strong vintage for the whites.  In 2006 Chapoutier’s single vineyards in both white and red excelled, with both his Les Greffieux red and L’Ermité white receiving 100 points from Parker.

These middling vintages produced some stunning individual wines, but as vintages more generally were affected by less-than-ideal weather. The 2014 vintage brought a cool, wet summer, which opened up the potential for greener-edged fruit and tannins. The best examples, however, have amazing freshness and vigour. The white wines excelled in these slightly cooler conditions and are excellent. The 2013s lack a little intensity and concentration, as do the 2007s – which outlines perhaps the largest contrast in terms of climate conditions between north and south. The Southern Rhône baked in sun all summer and produced superb wines in 2007, while the Northern Rhône and the rest of the northern half of France sat under cloud and cool conditions. In 2011 there were some exceptional singular examples of Hermitage but generally the growing conditions were less than perfect.

In 20 years, it is incredible that just two vintages really underperformed in the appellation. The 2002 vintage was plagued by a poor summer and heavy rainfall during harvest, which badly affected the quality of the finished wines. The 2008s are of much higher quality than the disastrous 2002s, however. While the year suffered from a cool, wet summer, the whites – as in 2014 – performed very well, even if the reds did not. There are a handful of exceptional white wines from the single vineyards of Chapoutier in 2008. The reds tend to be a little green, although Chapoutier’s single-vineyard reds also performed very well. Considering the weather conditions, the team wisely reduced the amount of new oak during élevage to balance the lighter fruit concentration.

Keep an eye out for next week’s Chave offer, with a selection of vintages going back to 1997 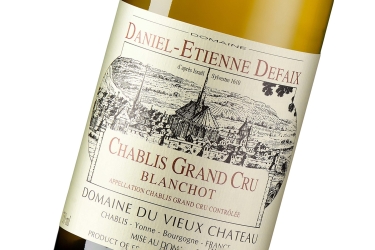