EditorialwinesF+R On The Road: A Tour of Italy's Places, People + Wines

F+R On The Road: A Tour of Italy's Places, People + Wines

This week F+R took a tour of some of Italy's finest vineyards, visiting a small selection of our favourite producers, tasting the latest vintages and talking to these iconic winemakers to better understand their philosophies, techniques and what makes their wines so special. The stories of fine wine tend to be ones of sacrifice and struggle. Great wine always comes at a cost. These pioneers started out choosing quantity over quality, thereby taking huge risks to make their ambitions viable. They are icons now, but their stories reveal difficult times and the need for unerring belief throughout the journey to becoming the influential industry figures they are today. Understanding these wines and the people behind them in the historical, commercial and social contexts of their respective regions bring these bottles to life and we look forward to sharing these stories with you over the coming months.

This week F+R took a tour of some of Italy’s finest vineyards, visiting some of the regions most iconic winemakers, tasting the latest vintages and attempting to get a better understanding of each of their winemaking philosophies and what it is, that makes their wines so special. We find the stories of fine wine tend to be ones of sacrifice and struggle. Great wine always comes at a cost. These pioneers started out choosing quantity over quality, thereby taking huge risks to make their ambitions viable. They are icons now, but their stories reveal difficult times and an unerring belief along the way to becoming the influential figures they are in today’s wine scene.  Understanding these wines and the people behind them in the historical, commercial and social contexts of their regions brings these wines to life and we hope to share these stories with you over the next few months.

At the time of writing we are on our final leg of the trip in the southern limits of Tuscany in the iconic wine mecca that is Montalcino. Our trip covered nearly 3000 miles from the East coast, starting in Venice, moving across to the foothills of the alps in Piedmont and then south through to the central hilltop vineyards of Tuscany,  exploring the many terroirs, personalities, cuisines and of course the huge variety of wines that define Northern and Central Italy. The last few vintages that we have been able to sample and that are now coming on to the market, most notably 2015 and 2016, have been fantastic vintages for the region and are setting a new benchmark of quality, taking these already established and highly regarded fine wine regions to new heights.

Our first visit was Venice. It is an unlikely spot for wine production, but in the lagoon islands surrounding Venice there is a special single vineyard called Venissa. Venissa is a heritage project started in 2001 by Gianluca Bisol to resurrect the Venetian agricultural traditions on the island of Mazzorbo that provided food, vegetables and wine to the Venetian empire until the great flood of 1966 wiped out all the crops in the region and left the islands abandoned. Venissa has brought the only native varietal grape of Venice – the Dorona - back from the brink of extinction, as well as many native herbs and spices that again adorn the lagoon landscape. The property is magnificent and staying on the neighboring island of Burano in one of the brightly coloured fishermen’s houses when all the other tourists had left the island was a magical experience. Everything about Venissa is centred on the local, artisanal and traditional. Retired fishermen tend the land, the Michelin starred restaurant uses the home grown produce and the labels adorning the bottles are by the last family handcrafting gold plate in the ancient tradition in Titian’s Venetian studio. This project is a genuine quest to bring back to life the first inhabited islands of native Venice and to celebrate the agricultural diversity this unique terroir offers all the way from their artichokes to world class wine.

Our next visit was a five hour journey across Italy from the east coast to the foothills of the alps and the more established wine growing region of Piedmont. As we head further north the region becomes much greener and as we hit the region of Alba the undulating foothills that dominate the landscape are dotted with vineyards. Piedmont is, compared to Tuscany, perhaps a road less travelled but the landscape is equally impressive, more mountainous and extreme in its vistas than Tuscany, full of ridges and the stunning backdrop of the snowcapped mountains of the alps.

Our first stop was the Produttori del Barbaresco where we visited Aldo Vacca, one of the most knowledgeable and experienced winemakers in Italy, having overseen the largest and one of the most highly regarded wineries of Barbaresco for nearly 30 years. The first hour of our trip was fascinating history lesson spanning the development of Piedmont as a fine wine region dating back to the unification of Italy and the vital role the Piedmont kingdom and its political ties played in establishing the region’s reputation for some of the finest wines in Italy.

The perseverance of Barbaresco within this time was far from plain sailing, having barely survived the many economic and agricultural plights of the 20th century in the region. Two world wars, economic depression, the rise of fascism and the great industrialist boom of the 60s and 70s saw most of Italy’s agricultural land deserted, and Barbaresco hung in the balance for many years. Even Barolo, which was more established, struggled at this time. The Produttori cooperative played an essential part in keeping the wine culture alive, putting food on the farmers’ tables and ensuring that a high level of quality was maintained when most of Italy, during the Industrial boom took the same approach with their grape growing. These days, thanks to Gaja and Produttori, Barbaresco is producing some of Italy’s finest wines and whilst Aldo is a modest man and not one for hyperbole, he couldn’t contain his excitement over the 2016 vintage describing it as the best vintage in the region since 1971. To think of the many viticultural developments that have happened since the early seventies, 2016 will no doubt be a vintage that will set the benchmark for the region over the next half century.

From Barbaresco we took the short 30 minute drive from north of Alba to the south and visited Barbaresco’s grand neighbor Barolo. Here our visits ranged from the traditional to the extreme. Our first visit was Vajra in the Vergne district. The Vajra family has been bottling their own wines since the mid eighties and now is seen as one of the leading lights of the region. The tasting highlighted the limitations of the region – Nebbiolo for instance under the Barolo regulations cannot be grown above a certain altitude and Aldo Vajra was not allowed to expand his Barolo production on certain vineyards he purchased as they exceeded this limit, therefore taking the novel approach of planting Riesling and Pinot Noir, two varietals rarely seen in the region. These grapes, whilst not typical, paradoxically brought about a heightened level of focus and technical approach to the winemaking of their native varietals of Dolcetto, Barbera and Nebbiolo. Riesling requires the cleanest of winemaking, and does not allow for any shortcuts, whilst with Pinot Noir the extraction and maturation requires constant tasting to know exactly the moment to rack the grapes and how long to age them, otherwise the magic of the wine is lost. These lessons taught the family new respect for the production of their own native varietals. The results brought greater discipline to their winery and these days the wines at Vajra are magnificent, incredibly pure, pristine, elegant examples of Barolo.

Our visit to Roberto Voerzio was a huge contrast. Throw out the rule book! Everything you have learnt at wine school forget it and try something completely different. The most stark example of this is the extreme early picking (second week of September) to avoid any risk of wet weather in the autumn, thanks to the uniquely high density planting (8,000-9,000 plants per hectare – not replicated anywhere in the region) and the extreme green harvest which sees final production of a minuscule 500 grams per vine for the Barolo, Barbera Pozzo and Merlot. The results are spectacular. To see such extreme variation in style but the same commitment to quality and experimentation shows how rich and varied the contemporary generation of wine growers in Barolo are.

Later in the week we left Piedmont and travelled south through the many tunnels that divide the lush green valleys of northern Italy to the more golden landscape of Tuscany. What is immediately apparent in contrast to the north is the vastness of space in Tuscany compared to Piedmont. The Barolo and Barbaresco villages are very much a mono-culture of vines, whereas Tuscany is a multitude of different agricultural vistas – vines, wheat fields, vegetables, fruit and olive trees and the hills less extreme and more expansive. At this time of year it feels like a garden of Eden, full of variety and life. Nowhere more so than in the mountain hamlet of Ama, home to Castello di Ama and some of the highest vineyards in Chianti Classico. From the estate the views are breathtaking looking across the rolling hills to the historical medieval town of Sienna in the distance. Their most famous vineyard l’Apparita translates as apparition and relates to the skyline of Sienna that appears behind the tops of the vine of this iconic vineyard which rose to fame in 1991 when it beat Chateau Petrus in a blind tasting. Whilst this site is 100% Merlot the majority of the estate is focused on growing Sangiovese.

Castello di Ama has been a leading light on this hugely diverse and disparate wine region which, due to such variations of quality within the region has not shared the same prestige as its southern neighbor of Montalcino. However there is no doubt that Chianti Classico at its best stands toe to toe with the great vineyards of Montaclino. Castello di Ama’s single vineyard Chianti Classico Gran Selezione in the 2016 vintage are beautifully pure and wildly aromatic, redolent with crushed dried flowers and balsamic notes. The wines perfectly capture the beautiful diversity of this idyllic setting. The restaurant and boutique hotel within the hamlet are equally breathtaking and not to be missed if passing through the area.

Today is the final leg of our visit and we head to Montalcino to visit some of our favourite producers - Poggio di Sotto, Canallichio di Sopra, Carlo Ferrini’s Giodo and Casanova di Neri. Similar to Chainti and Piedmont, the 2015, 2016 and 2017 vintages are a trio of magnificent vintages for the region and we can’t wait to taste the vintages side by side.

Travelling from one region to the next has not only brought these wines to life but has added so much historic and geographical context to the bottles that end up in our cellars and the dining table. It is a trip we hope all fine wine lovers can make themselves and that our series of articles over the next few months will provide ideas and recommendations that wine and food lovers will be able to experience on their own travels through this magical region. 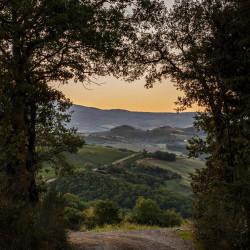