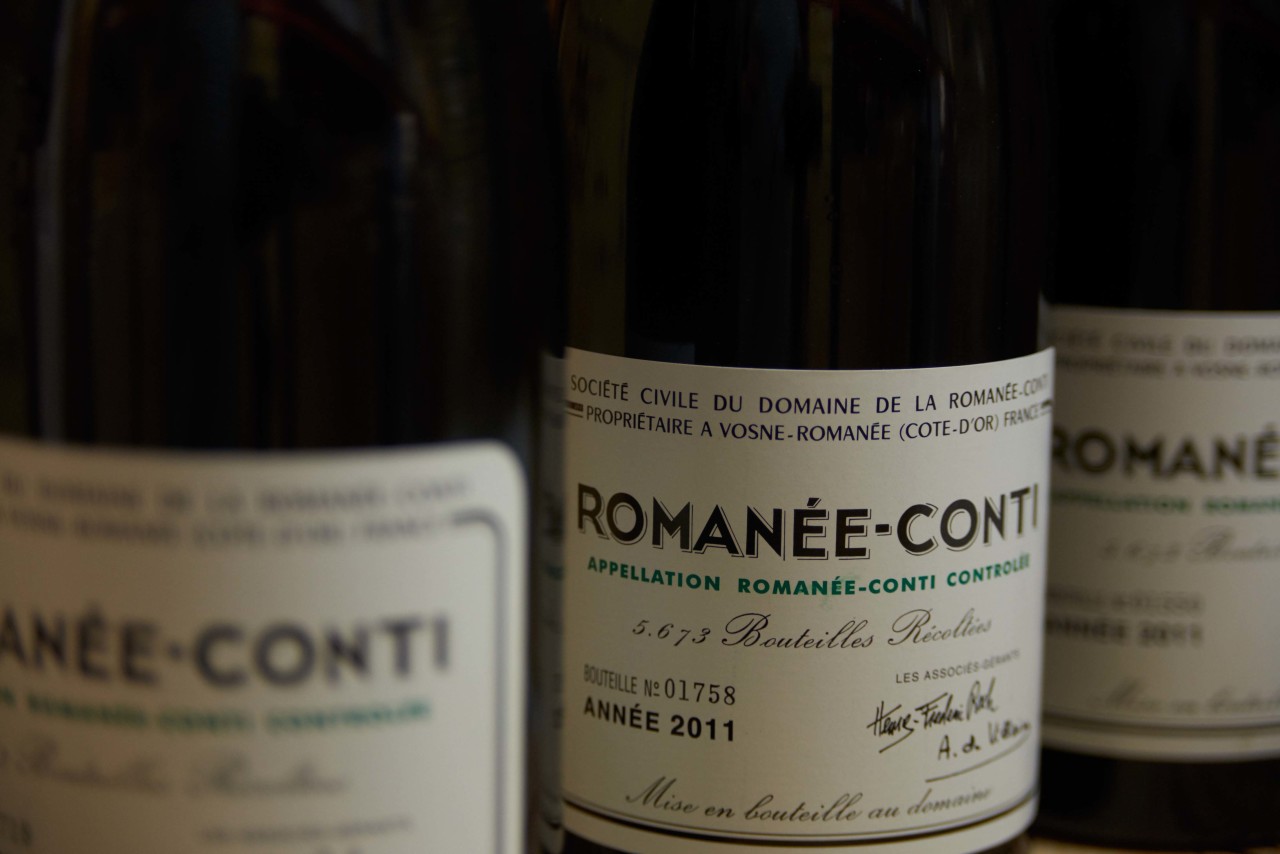 Domaine Romanée-Conti (DRC) is the exemplary Burgundian wine producer. Its 25 ha of Grand Cru vineyards cluster around the village of Vosne Romanée with part of the proprietorship including two of Burgundy’s greatest monopoles, La Tache and Romanée Conti. The six red and one white Grand Cru wines are often transcendental, each single vineyard distinctive (a Batard Montrachet is also made but not released commercially). In 2009, DRC also released a Corton Grand Cru from vineyards that they leased from Domaine Florent Prince de Mérode in Clos du Roi, Les Bressandes and Les Renades. In exceptional years, the 1er Cru Cuvée Duvault-Blochet is also produced, comprising of wine from young Pinot Noir vines selected from the various vineyards. 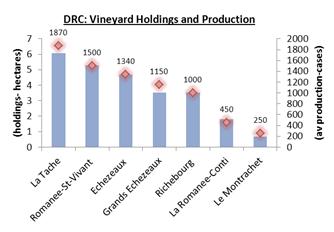 As a stable of fine wines DRC are unmatched in the Cote d’Or or indeed elsewhere (please see chart of the Domaine’s holdings). They are the largest proprietor of Grand Cru vineyards in Vosne Romanée, an incredible accomplishment in Burgundy where inheritance tax and Napoleonic inheritance laws can leave domaines fragmented and financially non-viable. 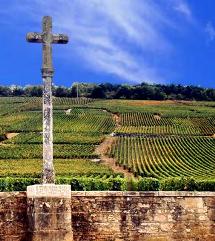 There is no sense that this domaine is resting on past glories. The co-director Aubert de Villaine is continually refining the viticulture and vinification. Yields are kept low at circa 25 hl/ha by pruning and severe selection of grapes - there is a belief here that wine is made in the vineyard. The laissez faire during vinification is part of a larger qualitative strategy build on a vast repository of knowledge. The Troncais oak comes from the domaine's own private supply, the toasting and drying of the wood adjusted to meet the demands of the vintage. This precision comes from generations of winemakers amongst its shareholders but it is by no means a provincial outfit. These are wines that are as comfortable on the auctioneer’s rostrum in London or Hong Kong as they are maturing very slowly in the cellars of Vosne Romanée. As esoteric as high end Burgundy might be, the profile of DRC reaches out beyond the cognoscenti. A cross stands on the wall of DRC acting as a reminder of the influence achieved by the clergy and subsequent nobility from being custodians of La Romanée Conti. This has always been an aspirational global brand. 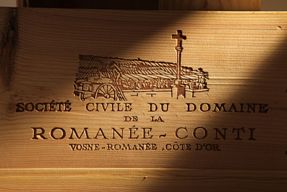 Distributed through an agency network this normally straight forward relationship becomes more complex through affective barriers to purchase and agency allocation. There can be no doubt this constriction leaves unresolved margin floating in the market as clients outside of the allocation process look to purchase the wines, in particular the monopoles of Romanée Conti and La Tache. This is resolved by private and trade clients selling their allocation, either En Primeur or mature stock into the secondary market. From an economic point of view this practice may be understandable, although there can be no doubt some of the sellers feel conflicted, disappointed and even saddened. These wines have an amazing ability to stir emotions - “so long that it is haunting.” (Allen Meadows on 1990 La Tache DRC)

Once the wines are in the secondary market demand meets supply more efficiently, although not perfectly. With relatively little Romanée Conti in case formats, premiums exist. The wines are often offered as an assortment case of mixed cuvees but this is not unique to DRC and the secondary markets get to grip with these issues very quickly. The volumes trading across the cuvees are a reflection of the small production and mature vintages trade predominantly in single bottle formats. There is no tight clustering of prices like you see with Bordeaux fine wines (indicative of the large volumes, the many competitors and few barriers to entry in Bordeaux fine wine). With shallow volume and price differences of up to 30-40% for the same wine across the supply network prices can move briskly. Visibility of the marginal bottle cost is crucial.

When prices across vintages and cuvees of DRC moved down between 2008 and 2009 it was the mature vintages that began to rebound quickly between late 2009 and into 2010. The prices of the monopole Romanée Conti increased by an average of 59% across a basket of the best vintages between 2010 and 2011, contributing to a 90% increase since 2008 (see graph below). 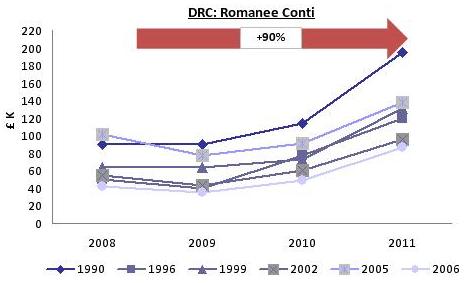 The tension between supply and demand continued to show between 2010 and 2011, a trend that was now to encompass all cuvee and across vintages. The rhythm has now changed. Vintages pre 2000 in case formats have become extremely rare- an OWC case of 6 of 1990 Romanée Conti will sell at circa GBP100,000. Romanée Conti continues to see significant price inflation and La Tache is certainly poised to pick up on this trend (see graph below).

With few exceptions, prices for DRCs have now surpassed their 2008 high. However the 2009 DRCs are due to be released early next year, with the release prices predicted to reach record heights. On trend with the broader market behavior, the current prices will be eclipsed as both investor and drinker seek value in the back vintages. DRC’s demand in Asia is growing and it would be misplaced optimism to believe that that interest will not exert serious upward pressure on prices.